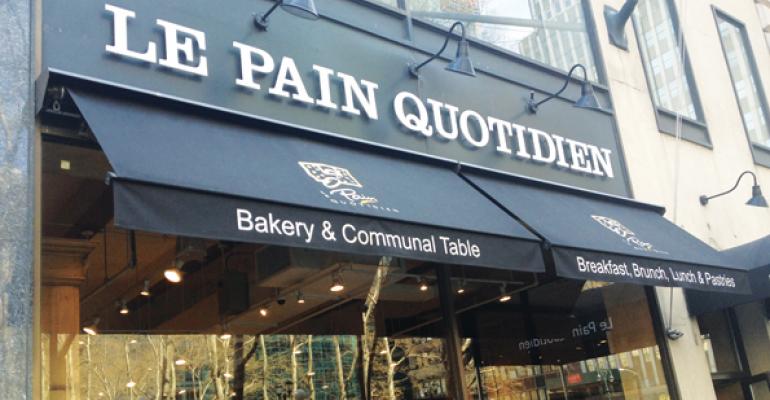 With 210 locations in 17 countries, Le Pain Quotidien is most certainly a sizeable restaurant chain, even as it keeps one foot turned away from looking or acting like it and one foot squared directly at corporate systems to facilitate further growth.

Founded in 1990 in Brussels, Belgium, by chef and entrepreneur Alain Coumont, Le Pain Quotidien, which translates roughly from French to “daily bread,” is a hybrid restaurant of sorts, with bakery-cafe and casual-dining characteristics. It offers full service, including beer and wine, as well as a takeout counter where customers can buy coffee, pastries and the chain’s signature open-faced tartine sandwiches. Packaged goods, such as its well-known custom-made organic hazelnut spread, are sold as well.

Average unit volumes, including retail and restaurant sales, are a little more than $2 million.

Although not intending to put a location on every street corner, Le Pain Quotidien grew steadily during the recent recession — funded generally by internal cash flow — and in the next year plans to open 18 corporate locations in New York, Philadelphia, London, Paris, Los Angeles and its newest market, Chicago. It also operates restaurants in Washington, D.C., but as it opened two units there last year, the company doesn’t have new units planned for that market in 2014. 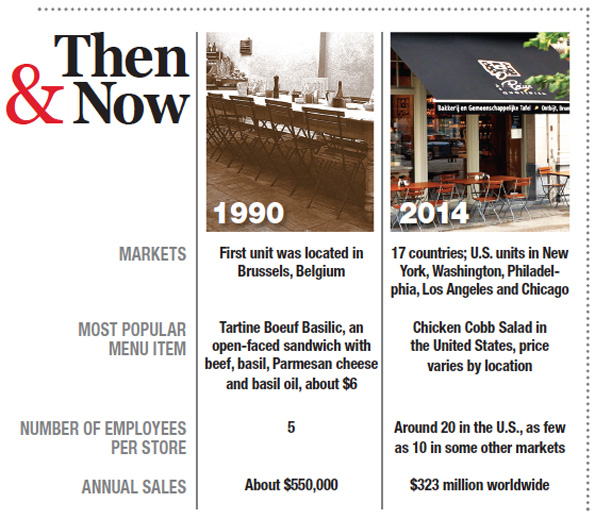 As it grows, it will keep its brand promise of unique, local design for each location, with distinct furnishings direct from Belgium.

“No two stores are exactly alike,” chief development officer Jay Wainwright said. “We’ve had these deep conversations when we’ve opened stores that look too put-together and started to look a little cookie cutter.”

But a very serious infrastructure and process is in place for site selection, “which sounds corporate and chain-y,” he said.

Site selection starts with determining what markets will work for Le Pain Quotidien. Wainwright and his team hired a consulting firm to find markets with the right demographics for brand customers, including high average household income; large professional populations; and ample nearby shopping, entertainment and tourism. In 2012 the company began its search for new markets for growth in 2014, and soon narrowed the prospects to Boston, Chicago and San Francisco.

Once markets were identified, requests for proposals were sent to three commercial real estate brokers in each market for suggestions on how best to enter them. Next, a taskforce including some of the chain’s European shareholders, team members from the New York headquarters and chief executive Vincent Herbert evaluated the proposals.

“Then we poked holes and got smart and talked about it,” Wainwright said.

Part of “getting smart” included pinpointing the five major trade areas in each market, including noting geographic barriers people are unlikely to cross for lunch, such as rivers or busy streets. The markets were also assessed based on whether they could support at least 10 locations — the magic number for optimal use and return on the chain’s baking commissaries set up in each new market.

Once the numbers are in place, a personal touch is required, Wainwright said.

“If I had one piece of universal advice to give to anybody who is building multiunit operations in a market, it’s to build a detailed trade area map of the market and rank and understand those trade areas,” Wainwright said. Without that map in place, restaurants run the risk of falling victim to hunches or what real estate brokers want to sell rather than what brand research has indicated, he said.

Once a proper site is found, Wainwright said it’s still important to invest money upfront to do a thorough site investigation.

“The best decision you make is when you walk away from a piece of real estate, even though you might have spent $20,000 on a site investigation report, when you find out there’s a structural problem with the basement or that there are code issues you might not have known about,” Wainwright said.

Site selection is a constant at Le Pain Quotidien, and even once a site is found, inspected, designed and turned into a restaurant, further research is needed, especially to pinpoint additional locations.

Wainwright calls that research “pin studies.” They involve asking about 100 customers where they came from — the intersection, not the exact address — and whether they came from home or work or were traveling. Then they pin those intersections to a map — electronically these days, although they used to use actual pins. That allows management to understand precisely where their customers are coming from and redraw potential trade areas for other locations.