After almost four decades of growth, reaching 580 restaurants in 10 states, the Bojangles’ Famous Chicken ’n Biscuits chain has earned the distinction of a mature brand. But that doesn’t mean the chain is ready to slow down.

With the vigor of a startup, Bojangles’ has been expanding at a growth rate that blows other national quick-service chicken chains out of the water. With one restaurant opening every six days, this year’s systemwide sales are expected to reach $1 billion. Between 55 and 60 new Bojangles’ units are scheduled to open in 2014, both corporate and franchised, and company officials expect to reach 1,000 total units by 2020. Average unit volumes are expected to increase to about $2 million, from an average of more than $1.7 million today.

“We’re a legacy company and a high-growth company,” said Eric Newman, executive vice president of the Charlotte, N.C.-based Bojangles’ Restaurants Inc., who joined the chain 30 years ago when the concept was only eight years old. 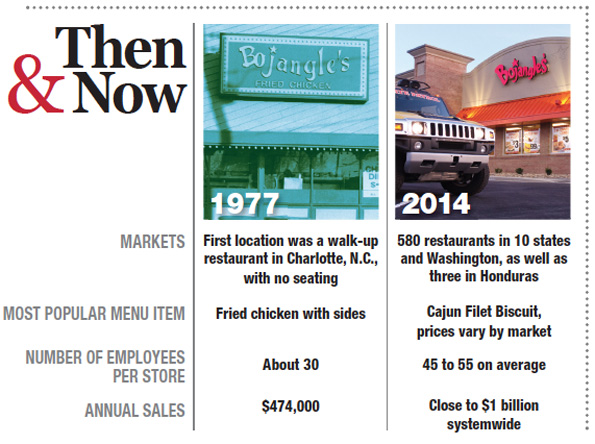 Newman described Bojangles’ current state as a third wave of rapid growth, one very different from the chain’s earlier stages. He said brands this size need to maintain a certain discipline as the cornerstone to successful growth.

“You have to be deliberate and strategic in your growth,” he said. “In the past, we took growth for granted and grew wherever it would happen, rather than developing a deliberate strategy.”

Bojangles’ was founded in Charlotte in 1977 by Jack Fulk and Richard Thomas. The first unit was a walk-up chicken spot with no seating. The menu included spicy fried chicken, cooked to order. Later, Fulk added handmade biscuits, and sales jumped by 60 percent, with cars lined up around the block.

Fresh-baked biscuits and fried chicken remain the cornerstones of the menu, and breakfast is big business for Bojangles’. About 40 percent of the chain’s sales occur before 11 a.m.

“I don’t think there’s anyone out there doing what we’re doing,” Newman said.

“We’re growing toward our strength, filling out where we’re strongest, rather than moving where we’re weakest,” he said. “Every restaurant you open contributes to greater consumer awareness and contributes to market voice. We could double the size of the chain without increasing the footprint.”

Another key growth area that requires a strategic approach is the “people question,” he said.

“You’re hiring a lot of people. You’re building an enterprise,” Newman said. “You have to stay in front of the people question. It’s whom you hire, how you train and how you retain. You have to look at your culture.”

Newman said the development of systems for hiring, training and retention has reduced turnover dramatically. Those systems include an online interview process that helps determine applicant aptitude and other characteristics that can point to whether the candidate is right for the job.

“We really focused on attracting the best people who seemed to be the right fit for what we do,” Newman said.

The company also does background checks and drug testing. Training focuses on fostering a certain operating culture built around a system of shared values. Hourly pay tends to be higher than minimum wage, and benefits go beyond what is typical for the industry segment, Newman said. Bojangles’ offers a 401K, with the company matching worker contributions, for example, as well as performance bonuses. The health plan is highly subsidized, Newman said.

Bojangles’ system is about 60-percent franchised, and franchisees are not required to follow the same systems. Most do, however, because the success of corporate units has helped demonstrate their effectiveness.

People, systems and strategy — those are the key levers for growth at this tier, according to Newman, who added, “As someone once said, ‘It’s simple. It’s just not easy.’”