/sites/all/themes/penton_subtheme_nrn/images/logos/footer.png
Recent
Recent
Restaurants and robots: Don’t be alarmed
Nov 29, 2022
Menu Tracker: The beverages of the holiday season
Nov 28, 2022
US Foods announces Dave Flitman as CEO
Nov 28, 2022
How Killer Burger is setting the foundation for aggressive growth
Nov 28, 2022
The emergence of Birria
Nov 28, 2022
Featured
How 21 restaurant companies performed in their most recent quarters
Nov 22, 2022
How eco-friendly Seattle restaurant chain Just Poke is doubling in size in 2022
Nov 17, 2022
In the Mix this week: White Castle’s culture, a CREATE recap, Denver’s restaurant scene and more
Oct 27, 2022
How this emerging brand is planning on nearly quadrupling in size in just one year
Oct 21, 2022 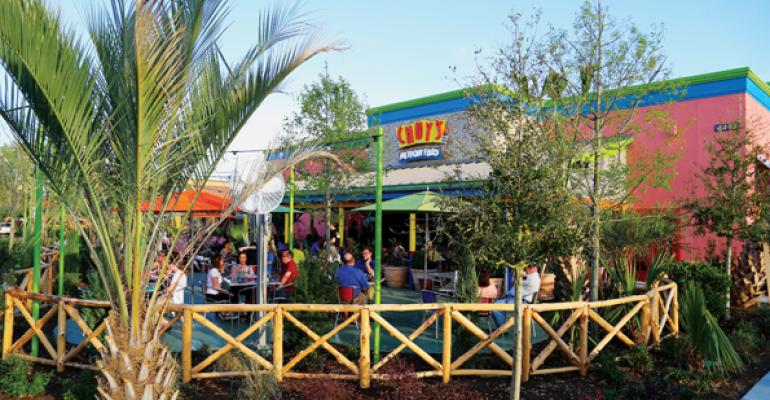 <p>Tex-Mex-inspired Chuy&rsquo;s has grown mostly in the Southeast, with expansion ramping up since the company went public in 2012.</p>
News>Emerging Chains

Next Steps for Growth: Chuy's revs up expansion after IPO

Chuy’s Holdings Inc., owner of the 51-unit Chuy’s Tex-Mex-inspired casual-dining chain, moved from private equity ownership to the public stock market in 2012, just as it was in the midst of a major growth spurt.

The Austin, Texas-based operator had grown from its first unit in 1982 to eight restaurants when it was acquired by New York-based private equity firm Goode Partners LLC in November 2006. By the time Chuy’s issued its initial public offering in July 2012, the chain boasted 36 restaurants. At the time of the IPO, Chuy’s said it expected to open between 50 and 55 units in the next five years.

“That was a good time to turn to the public markets,” said Steve Hislop, who joined Chuy’s as chief executive in 2007. Chuy’s offered more than 5.8 million shares for $13 each and raised more than $70 million. The funds were used to reduce debt and pay a dividend to preferred stockholders. 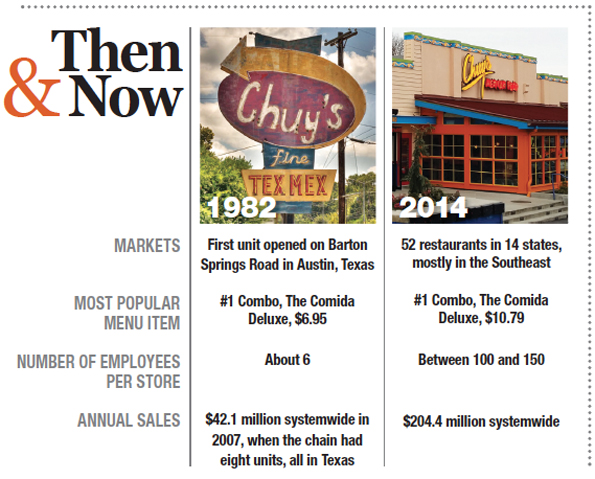 Preparing for the move from somewhat insulated private equity ownership to the more open scrutiny of being a publicly traded restaurant stock required the right management team. Chuy’s brought on Jon Howie as chief financial officer in August 2011, succeeding Sharon Russell, who became Chuy’s chief administrative officer. Before joining Chuy’s, Howie served as CFO at Del Frisco’s Restaurant Group, and prior to that was controller and chief accounting officer at Lone Star Steakhouse & Saloon.

Chuy’s also realigned its board of directors with a focus on members independent of company management, Hislop said. The company now has seven directors, four of whom are independent and two of whom are the brand’s founders. Hislop rounds out the final spot.

Finding the right mix of people — from the top down — is a common theme at Chuy’s, especially as new unit openings dominate the chain’s path.

Since going public in July 2012, Chuy’s has added 15 new restaurants, nine of which opened in 2013. In total, the company plans to open between 10 and 11 new restaurants this year, Hislop said, which “equates to another year of at least 20-percent unit growth.”

“Last year was a big one for new markets for us,” Hislop said. “We went into six new states last year and seven new markets.

“This year we are back-filling,” he continued. “We will go into one new market area in the Northern Virginia-[Washington] market this year. Everything else will be back-fill.”

To help, Chuy’s added a second new-unit opening team to the mix in 2013.

“It was actually easier to open eight [restaurants] last year than it was five three years ago,” Hislop told Nation’s Restaurant News in 2013, amid the opening spree. “We will never grow faster than our people.”

It is the people, after all, who create and facilitate Chuy’s corporate culture.

“The best for us is to promote from within,” he said. “We feel like we have the best culture.”

Hislop said maintaining that culture is important, and one way they do it is with quarterly “culture clubs” to help new managers and hourly team members learn what Chuy’s is all about.

“We really live by a ‘two ears and one mouth’ philosophy,” he said, “which means we are listening twice as much as we are talking. Our jobs at headquarters are to get rid of all the hurdles so the units don’t have distractions and can take care of those guests, who pay us all.”

With the right financing structure and the right team in place, Chuy’s growth then becomes reliant on real estate and building. Real estate is in place about a year and a half out, Hislop said, noting that Chuy’s uses a variety of parcels and conversions.

Conversions are in the brand’s DNA, as the original Chuy’s restaurant in Austin, founded by Mike Young and John Zapp, was refashioned from an abandoned barbecue joint into a 60-seat restaurant. They recall spending all but $20 of their funding to get the restaurant opened, so that remaining money was the full budget for decor. Young took that $20 and purchased two paintings on velvet — one of Stevie Wonder and another of Elvis — a move that led to each subsequent unit’s Elvis shrine.

The flexibility of the Chuy’s concept allows the company to use former restaurant spaces, end caps and even urban office-residential buildings, Hislop said.

“We like to have them a little different,” he said. “The only key is the kitchen has to fit in perfectly.”