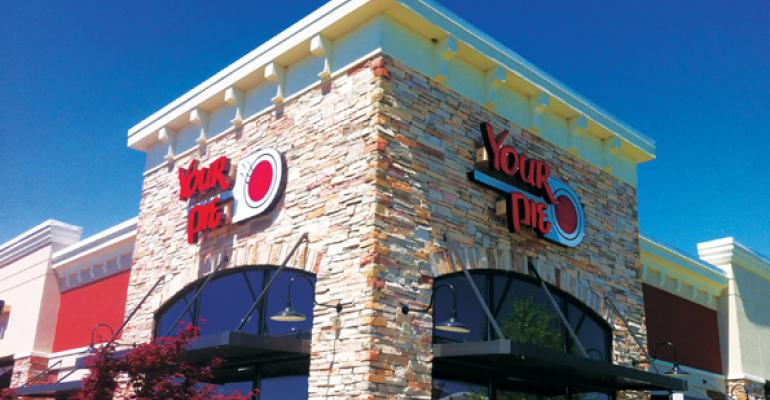 Next Steps for Growth: Your Pie fuels growth in expanding niche

Your Pie was one of the first brands to help create what is now the burgeoning and booming fast-casual pizza segment, and the chain wants to not only keep growing its own slice of the pie, but also the size of the whole sector.

After winning the race to open one of the first fast-casual pizza restaurants in April 2008 — at the age of 24, no less — founder Drew French is confident in his brand’s ability to expand from its current 18 units to the next big milestone, 100 locations, by the end of 2015.

Athens, Ga.-based Your Pie will continue its plan of expansion by franchising throughout Georgia, Florida, Tennessee and South Carolina. It looks to eventually move beyond the Southeast with a new building prototype, as well as an evolving menu that makes use of regional toppings.

“The cool thing about being first to the fast-casual pizza space is we began as innovators,” French said. “We’re always looking to improve for our customers and our staff.” 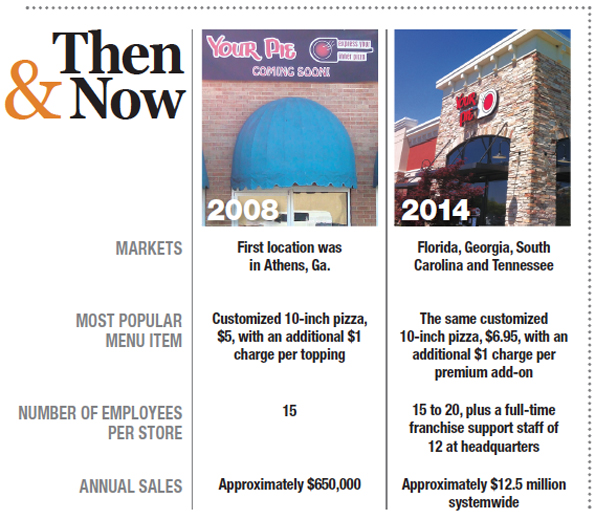 As an upstart, unproven brand in a new, unproven industry segment, Your Pie’s first restaurant wasn’t exactly a financing magnet. French had difficulty securing a loan, so he scraped together his savings, opened Your Pie, and began serving brick-oven pizzas that customers could customize and get quickly. Word-of-mouth surrounding the new concept spread, business picked up, and soon French was able to get that bank loan to open the second location.

Soon French found himself interested in franchising to build out Your Pie’s place in its segment, which suddenly was awash with competitors like Pie Five Pizza Co., Project Pie and others. In 2009, franchising veteran Bucky Cook, who had been consulting French on his venture, took an equity position in Your Pie and came aboard full time as the new chief executive of Your Pie Franchising Inc. Cook had cut his teeth at Heavenly Ham, a ham purveyor that grew through franchising from 10 units to 230 locations and was sold to HoneyBaked Ham in 2002.

“I always brought in people who knew how to do things I didn’t know how to do,” French said. “I’ve always had the vision to be bigger than we are, and that hasn’t changed.”

In November, Your Pie also brought on Ken Caldwell as vice president of development. Another franchising veteran, Caldwell worked with Cook at Heavenly Ham and stayed on with HoneyBaked Ham after the merger.

On the financing front, Your Pie has been able to attract an investment from Atlanta-based private equity group Georgia Oak Partners, which backed the chain with an undisclosed outlay last October. The firm’s director of restaurant and retail, David Barr, stepped in as chairman of Your Pie, a position he also holds with KFC franchisee PMTD Restaurants LLC and Rita Restaurant Corp. Barr also was chief financial officer and CEO of Great American Cookies from 1994 to 1998 before its sale to Mrs. Fields.

Georgia Oak is looking to help fund corporate-store development and also bolster franchise development by increasing outreach, recruitment and engagement with franchisees, Barr said. He added that Georgia Oak has several crucial relationships with vendors and suppliers needed to build scale in the Southeast and in new markets.

“The human element is a big part of growth,” French said. “The intellectual capital that David provided helped line up the processes and steps, and he brought the contacts he could provide from his time in the franchise world.”

Barr said the human resources knowledge within Your Pie would yield “plenty of fertile ground” in the Southeast, where the chain is targeting Atlanta; Charlotte, N.C.; Charleston, S.C.; Nashville, Tenn.; and Tampa, Fla., for growth.

Most of the growth is expected to come from multiunit franchisees, but one corporate store is already in development. That unit will serve as a training site and as a proving ground for a new store design.

“Our focus is on franchising,” Barr said, “but we’ll operate company stores when we think we need to be the leader.”