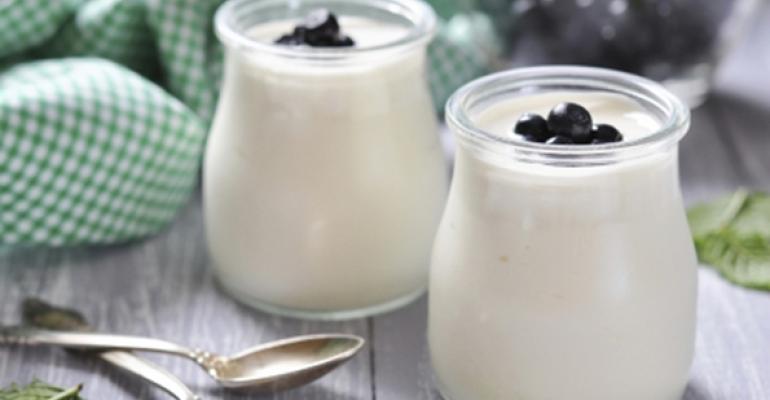 <p>A prime example of consumers&rsquo; growing desire for affordable protein options is Greek yogurt, which has seen an increase in consumption in recent years.</p>
Consumer Trends

Smart restaurant operators satisfy cravings with a variety of options.

Move over, calories, fat and whole grains: There’s a new nutritional element catching consumers’ eyes. It’s protein, and it’s what a growing number of consumers are looking to get more of in their diets, say officials at market research firm The NPD Group.

According to recent NPD research, one quarter of adults say they look for protein on nutrition labels, up from 18 percent in 2004. Most everything else on nutrition labels is declining in viewership, including calories, fat, whole grains, dietary fiber, Omega-3s and antioxidants.

“It signals a shift in what we are seeing,” Seifer said. “People might be shifting to looking for protein.”

While getting more protein may seem like something only CrossFit athletes and Paleo devotees would be concerned about, this shift transcends all types of consumers, NPD found.

“All [age groups] are trying to do it,” Seifer said. “Why they are doing it is different.”

Younger consumers are looking to increase their protein as a way to build muscle or as a source of good energy, while older consumers are doing it for health reasons, mainly to avoid eating foods or ingredients deemed bad.

Consumers are eating all kinds of proteins, but many are choosing less expensive plant-based proteins over high-cost animal meat.

“They are going to get their protein, but they’re going to keep their wallets in check.” 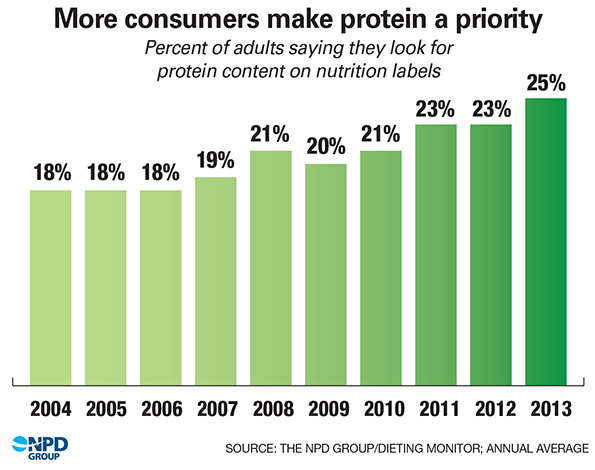 Arguably, the perfect example of consumers’ growing desire to get more protein for less money is Greek yogurt, which has seen an increase in consumption in recent years. Yogurt is also appealing to protein-seekers because of its high probiotic content, as 30 percent of consumers say they are looking to get more probiotics, according to NPD.

Though consumers want to get more protein in their diets, few are aware of just how much they need, NPD found. As a result, when promoting products or dishes with high protein, manufacturers and operators will have success with some marketing messages over others, Seifer said. For example, consumers surveyed said they’d like to see more labels like “good source of protein” and “high in protein” versus the number of protein grams, a nutrition fact that may mean little to most consumers.

“It’s not a bad idea to call it out,” Seifer explained. “Labels on menus take doubt away for consumers.”

With more consumers looking to get more protein in their diets, many operators are adding protein-packed dishes to their menus or calling out the foods they already offer that are high in protein. Executives at the soft pretzel chain Philly Pretzel Factory and Allium restaurant at the Four Seasons in Chicago shared how they are successfully satisfying their customers’ desire for more protein.

“We need to let people know that we’re healthier than pretzels with cheese whiz at 2 a.m.,” said Adam Terranova, Philly Pretzel Factory’s marketing manager. “If protein is important to you, then it’s a good thing.”

Now the 152-unit chain is planning to promote protein to another group: families. As early as spring, the chain will begin using new signage inside its 24 Walmart locations aimed at families looking for a healthier snack.  The signage will tout the grams of protein in rivet shakers, or plastic containers filled with bite-sized pretzels. With the chain’s pretzels typically viewed by its customers as an indulgence, Terranova says he isn’t expecting sales to jump. Instead, he’s “looking more for that justification” for the purchase.

When Allium restaurant opened in 2012, it was with a mission to serve fresh, local ingredients in bold and creative ways. With a growing number of health-conscious consumers, executive chef Stephen Wambach wanted to ensure the menu also featured—and specifically called out—innovative, better-for-you breakfast options. To achieve that, he created a selection of items he’s dubbed “guilt-free,” in part because they are high in protein and low in fat, and then highlighted each item’s protein, calories and fat on the menu. The effort has been very well received, with the guilt-free items currently accounting for one quarter of the restaurant’s à la carte breakfast orders. The most popular items are the Quinoa and Chia Porridge, with 9 grams of protein, and the Egg White Kale and Quinoa tacos, with 20 grams of protein. Other items in the menu’s guilt-free section include a Low-Fat Protein Frittata, at 52 grams of protein, and a Greek Yogurt Parfait, at 32 grams.