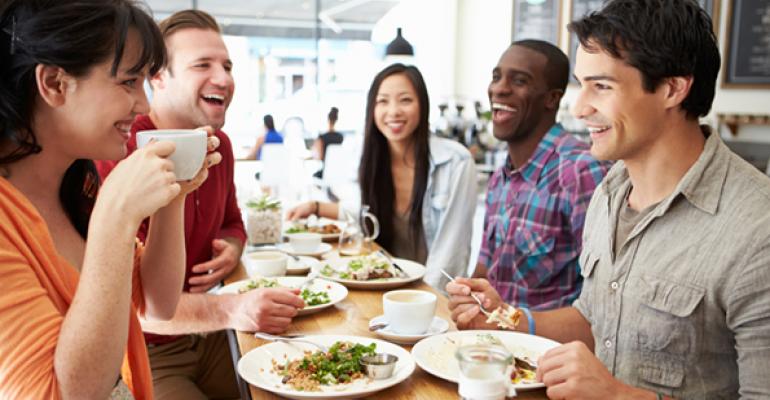 Convenience, value, menu variety top of mind for diners in the new year

“Consumers know they’re in the driver’s seat,” said NPD analyst Bonnie Riggs. “They want what they want and they want it now. [Operators] have to know what that is.”

Riggs, drawing on NPD consumer data, outlines four changing areas of the industry operators must stay focused on in 2015 in order to adapt to the new needs of their consumers and drive their businesses forward this year.

1. Convenience. Consumers still want restaurants to save them time, but in 2015 that won’t necessarily equate with making food faster or expediting the drive-thru line. Instead, Riggs says it will be about using technology solutions to make the dining experience faster and more efficient. “Mobile apps — that is going to be a big thing in 2015,” Riggs said. Things like “pay through phone faster, pre-order” will build in popularity among consumers.

2. Value. With few consumers surveyed reporting their restaurant experience was a “good value for the money” in the year ended September 2014, seeking the best value will still be consumers’ approach in 2015. However, that value won’t be defined by the lowest price, but rather by the benefits the product or service adds to their life, NPD found. “Your value message today should not be a price message,” Riggs said.

3. Menu. While consumers continue to be more adventurous in their eating, operators aren’t providing enough variety or quality to meet their needs, NPD found. For example, in the year ended September 2014, only 37 percent of consumers ages 25 to 34 rated the variety of food on restaurant menus as excellent. And for consumers in the 35 to 54 age range, the percentages were even lower. This year, operators will need to put increased attention on adding interesting menu items and coming up with new twists on old favorites, while at the same time retaining customer favorites, Riggs noted.

4. Service. Today’s consumers — especially Millennials — expect that restaurant operators deliver added value by focusing on their specific needs. With 41 percent of consumers ages 18 to 24, and 42 percent of consumers ages 25 to 34 rating pleasant, friendly service as excellent in the year ended September 2014, this year offers an opportunity for operators to cater to specific customer groups. “You can’t just say ‘service’ broadly,” Riggs said. “We’re going back to targeting certain groups.” Operators will need to focus on the needs of multiple consumer groups, including the growing number of single diners, families with children, both younger and older Millennials, Baby Boomers and seniors.

Year of the customer

NPD predicts 2015 will be another highly competitive year, and many operators are already planning to hyper-target customers’ needs. Some are rolling out major changes, such as Starbucks, which recently began introducing mobile ordering and will launch delivery later this year. Others are introducing smaller initiatives in the hopes of having a big impact. Fazoli’s and Union Square Hospitality Group, which fall into the latter group, share what they’re doing to meet consumer needs.

The Lexington, Ky.-based fast-casual Italian chain has been working to improve its service for some time now. Several years ago, it did away with pagers and introduced a guest ambassador program that uses staff to deliver food to the tables. This year, the chain is enhancing that program further by using ambassadors to clean up when diners are finished. It’s a service the chain discovered its core customer groups — families with children under 12 and seniors who sometimes visit casual-dining chains — want.

“We saw it as an opportunity to take our service to the next level,” said Jon Quinn, vice president of marketing for Fazoli’s. “We’re beating [lower-end casual-dining chains] on price, but [we] have the opportunity to get closer to the service of casual dining.” The enhanced program will begin rolling out this year to all company-owned locations, and eventually to franchised units.

The Danny Meyer-led New York City-based restaurant group, which includes fine-dining establishments such as Gramercy Tavern, Union Square Cafe, as well as the better-burger chain Shake Shack, is prepared to meet the challenges of 2015 with its long-established training program that puts guests first.

“We train our teams to respond to each guest as an individual,” said Stephanie Jackson, senior training manager for the company. “Our teams are listening, not just with their ears.”

For example, when it comes to the growing number of guests who prefer to dine alone, Jackson believes that USHG restaurants are uniquely positioned. Rather than assuming what kind of experience these guests want, USHG staff is trained to ask questions and take visual cues, and then place the guest in a situation that meets their individual needs. And while Jackson said the company hires team members with “a curious intelligence,” who tend to have an “insatiable desire to connect with guests,” she said they also know when to step back. “It’s about the guest’s agenda, not their own,” she said.