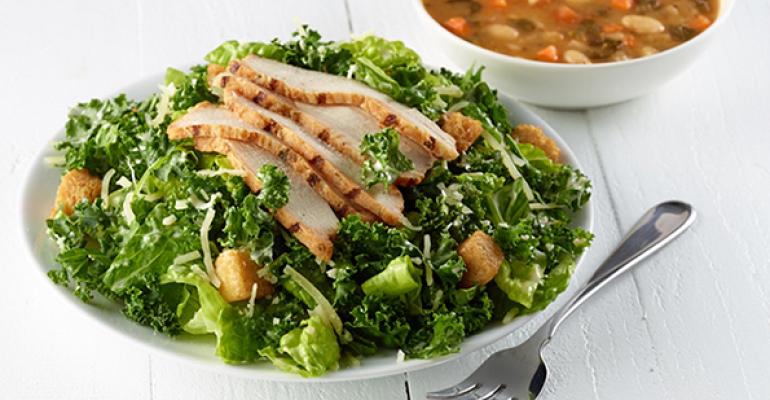 For many Americans, resolution season means trying to eat more healthfully. Restaurants are responding to those resolutions by offering food that fits customers’ goals, but what exactly they mean by eating healthfully is an open question.

“There is no standard definition for health; it means different things to different people,” restaurant consulting firm Technomic Inc. said in its Healthy Eating Consumer Trend Report, completed in November. “To some, health is about the nutritional content of an item, while to others, health refers to how an item is produced.”

Kelly Weikel, Technomic’s director of consumer insights, said many consumers are devising their own diets, “choosing their own balanced, personal approach to health and wellness that makes them feel good emotionally and physically.”

That may mean they seek items with positive attributes. Promises to improve vitality — “particularly ‘power’ claims,” Weikel said — are resonating with Americans these days.

“Additive” messages, as opposed to “avoidant” messages, such as assurances that a particular item is low in calories or fat, seem to be what many consumers are looking for, she said.

“The avoidant claims that are resonating right now have to do with avoiding artificial ingredients, etc., for natural, real, unprocessed and healthy [foods],” Weikel said.

Subway seems to have gotten the message. The quick-service sandwich chain’s reformulated grilled chicken, introduced in January, is being touted as having no artificial preservatives or flavors.

Subway executive chef Chris Martone said the chicken has a more pronounced chicken flavor than its predecessor, due to chicken broth in the marinade.

Along a similar vein, Del Taco recently reformulated its turkey filling, first introduced in January 2014, to make it taste more of turkey.

The quick-service chain, with more than 540 units, teamed with turkey producer Jennie-O to adjust the meat’s seasoning and make it chunkier, “so the natural flavor of the turkey comes through,” Del Taco executive vice president and chief brand officer John Cappasola said.

Co-branding with Jennie-O gave Del Taco a marketing advantage, Cappasola said, since Del Taco’s research indicated that many Americans use the brand’s ground turkey when cooking Mexican food at home, mostly for turkey’s more healthful reputation compared with ground beef. Cappasola said he hoped that by letting customers know that a product similar to what they used and trusted at home was was readily available at Del Taco would give the chain an advantage.

“There’s more demand for fresh, quality and better-for-you type products,” he added. “The brands that will win are the ones that will figure that out without asking their customers to sacrifice.”

Applebee’s went so far as to call its new Pub Diet menu, introduced in January, “indulgent.” The menu consists of four items that are high in fiber and protein and have fewer than 600 calories.

“At Applebee’s, better-for-you doesn’t mean boring food,” Applebee’s senior vice president of culinary and marketing Darin Dugan said in a press release. He added that the new items were designed to match customers’ “flavor preferences and profiles without compromising their goals of eating healthful foods.”

Among the new items is a 350-calorie Pepper-Crusted Sirloin & Whole Grains, with sautéed spinach, roasted grape tomatoes and portobello mushrooms, finished with a light broth. Broth has become a hot trend at independent restaurants, where chefs, who often call it “bone broth,” tout its restorative qualities.

The items, along with a new Shrimp & Broccoli Cavatappi dish, are permanent additions to Applebee’s menu.

Cheeseburger in Paradise also incorporated nutrient-rich items in its Surfside Slimdown menu, available until Feb. 5. Among the new items is a protein-rich Buffalo and Black Bean Chili.

The chain has also started squeezing its own juice for a new beverage called Day Glow, which is made of juiced carrots, oranges and lemons, finished with organic ginger juice.

Ginger, which has been popular with the cold-pressed juice set for several years, also appears in a new Jamba Juice smoothie. Greens ’n Ginger is part of the chain’s Fruit & Veggie line, and is a blend of mango, peach, kale and lemon, along with ginger purée. Jamba Juice is marketing it as “an excellent source” of vitamins A, C, B6 and K, as well as folate.

Jamba Juice also introduced an addition to its Whole Food Nutrition line. The Amazing Greens smoothie combines kale, lemon, peach juice, peaches, bananas and pumpkin seeds. Not only is it high in vitamins A, C and K, as well as folate and manganese, but it also has 11 grams of protein.