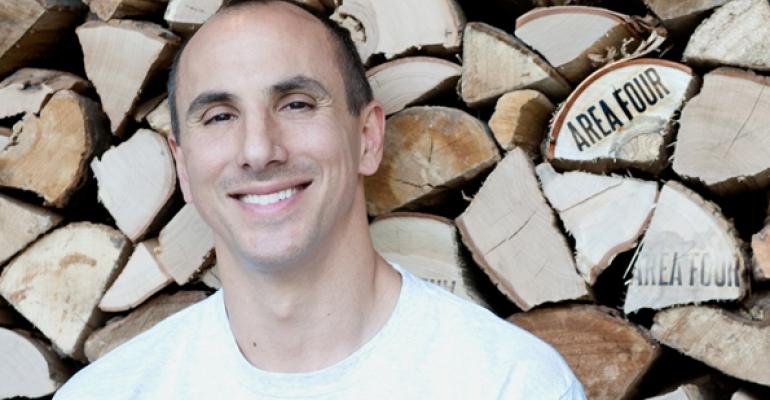 Chef Michael Leviton discusses the challenges of his new restaurant, A4 Pizza.

Michael Leviton, chef-partner of Lumière restaurant in Newton, Mass., is not just one of New England’s most celebrated chefs. He’s also the board chair of Chefs Collaborative, a leading conservationist group focusing on sustainable practices.

Like many fine-dining chefs, Leviton has recently branched out into the more casual food world, first with the opening of Area Four and a related food truck in June 2011, and then last week with that restaurant’s little brother, A4 Pizza.

“Area 4 has evolved from a restaurant with a pizza program to a pizza place with a restaurant program, so this is the next logical evolution,” he said.

The new restaurant is small — 36 seats — with a wood-burning oven churning out pizzas that Leviton describes as a hybrid of Neapolitan and thin-crusted New Haven styles. “It’s mostly what we were doing at Area 4 already, and we put it in a smaller package that allowed us to focus on just doing that,” he said.

Leviton talks with Nation’s Restaurant News about his new pizza restaurant and the challenge of running a profitable business while using local, sustainable ingredients.

The idea is that, no matter what sort of food you’re making, you can and should be using sustainable ingredients and local when possible. For me, at the end of the day, I don’t want to put crap in my body or crap in my customer’s body.

But it’s not perfect. Properly raised product is by necessity going to cost more in the short term … although the true cost of commodity agriculture is devastating in terms of environmental degradation, our physical health and what it’s doing to local economies.

I see commercials for chains selling two large pizzas for $5.99 or something, and I don’t know how that’s possible.

Whether it’s pizza or the piadena sandwiches we serve on our food truck, or the fancy-pants food that we serve at Lumière, our food’s going to cost more. It just is. But there’s a value proposition in doing what I and many others are doing. We have to look forward toward our customers, giving them better, healthier food, and backward at the environment and the economy.

But I completely get that people are on a budget and they have to make choices. I would love to tell you that I can use a Massachusetts-grown flour, but the fact of the matter is it would probably cost me in the range of 4 to 5 times as much as what I use. In order to get the mouth feel we want, we are blending a number of different flours for our crust, but they’re not from New England. But if I start quadrupling my costs, no one’s going to buy my pizza. All my high and mighty proselytizing won’t keep my doors open — I don’t have a place where I can charge you $200 for a meal of pizza.

How much is your pizza?

We make our own mozzarella every day, and our own mushroom sauce, clam sauce and marinara. We make our own sausage. If I could keep up with the bacon [demand], I’d make it, but as it is we’re using Niman Ranch bacon, and they’re doing great things, both forward and back. We use a ton of local produce, a ton of local fish and shellfish.

At the end of the day the sourcing is a complex, multivariable calculus that changes a little every day. I’d love to tell you that I’m perfect, but I’ll say I’m not even close. But every day we’re getting closer to where we could make all those right decisions and keep our doors open.

We can’t make massive changes overnight. Change doesn’t happen that way. We can use our restaurants and our menus to start a conversation, and hopefully that conversation can lead to some change.

How different is A4 Pizza from Area 4?

It’s a quarter the size. In fact, we only have a half dozen tables. The rest is bar or counter seating — it’s somewhere between a pizza place and a bar.

Area 4 has a lot of glass that lends itself to one kind of look. A4 pizza is in an older building that has long been a bar or restaurant. It’s smaller, darker. We gave it a different sort of ‘workshop-y’ feel. It’s also in a different area.

Area 4 is in Cambridge, Mass., and A4 pizza’s in the next town over, in Somerville’s Union Square. How’s the new neighborhood?

Somerville seems to be quite restaurant friendly. Liquor licenses are easy to come by and rents are much lower than in Cambridge. It’s still close to Harvard, MIT and young professionals. And there are still a lot of young families living there before their inevitable move out to the suburbs.

Can you tell me more about your style of pizza?

It’s not as hot an oven as for Neapolitan pizza, so it takes about three and a half minutes to cook. The crust has the blistering that you’d find on a Neapolitan pie, but also the crispiness of a New Haven pie.

I’m also not using a ton of yeast; I use a 12-year-old starter that my chef de cuisine started. The dough ferments for about 30 hours. I think it has more depth of flavor that way, and if there’s a more difficult way to do something, we’re going to find it.