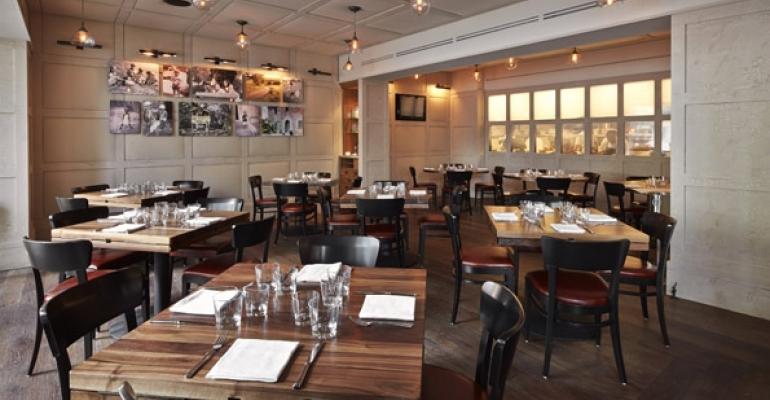 Fabio Trabocchi has long been praised for his skill in cooking seafood. A native of the Italian region of Le Marche, the chef and owner of Washington, D.C., restaurants Fiola, a modern Italian trattoria, and Casa Luca, a new casual osteria, grew up 20 minutes from the Adriatic Sea.

Early in his career, Trabocchi worked at seaside restaurants with counters where guests would select the fish they wanted prepared for them. Trabocchi plans to bring that experience to Washington this December, when Fiola Mare is scheduled to open on the Georgetown waterfront. The restaurant will include an outdoor patio with a retractable roof for year-round use.

Trabocchi was named a Food & Wine magazine Best New Chef in 2002, when he was chef at Maestro at the Ritz-Carlton, Tysons Corner, in McLean, Va. During his tenure there, he was also named best chef in the Mid-Atlantic in 2006 by the James Beard Foundation. Fiola was named one of the best new restaurants in 2012 by Bon Appétit magazine, an acknowledgement it also received from Esquire in 2011.

Trabocchi discussed his plans for Fiola Mare, as well as the recently opened Casa Luca, with Nation’s Restaurant News.

Why open a seafood restaurant?

I love seafood, to start with. I’m excited to cook everything, but maybe a little bit more when it comes to seafood.

What types of dishes do you plan to serve?

We have drafted the menu, but we’re still working on it. There will be Italian seafood and pasta, crudo and an oyster bar, salads and pastries, and grilled whole fish carved tableside. The fish will come from all over — from Maine to California, Latin America, Italy, Spain, Portugal.

We’ll make some classical Italian dishes and some things that are more contemporary.

There’s a bounty of seafood out there. From here [in the D.C. area] we’ll use jumbo lump crab and soft-shell crab, and in the Northeast there’s wild striped sea bass, Belon oysters, Nantucket Bay scallops and spot prawns. From the West Coast we’ll get Catalina Island sea urchins that are delicious.

The inspiration for Fiola Mare is from restaurants on the sea where I worked early in my career. The restaurant will be overlooking water from every window. It will have an open kitchen and a counter where people can choose their own fish, like they do on the Adriatic.

But on the Adriatic the fish is local. Do you face challenges sourcing seafood for Fiola Mare?

Even at Fiola, our biggest part of the menu is seafood. That’s what we sell the most of. It’s a matter of coordinating schedules with suppliers from all over the country and Europe as well. We might have to talk about seafood at 5 in the morning when they first see the fish at the auctions. At the same time, they’re going to have their reports from fishmongers in Portugal and Spain about what’s coming in. So the menu will change frequently depending on availability of local seafood and what’s available abroad.

We won’t make big orders of ingredients when they’re coming from afar, because we don’t want to sit on ingredients that have already been traveling. It’s important to use what’s sustainable and that has the shortest time out of the water as possible.

A look at Casa Luca

Casa Luca is inspired by the regional cuisine of Le Marche. It’s untouched, non-elevated regional cuisine. We did some specific selections of seven wines on tap. A glass is $9, half a liter is $22 to $25, and cocktails are $13.

We also have 10 red wines and 10 whites by the bottle that are each $28. We did that so the customer could choose a wine and not feel guilty about a second bottle, but also to try varietals they might not have tried before.

The cocktails are based on Italian amaros. We have custom-made cured meats and custom cheeses, and a pasta room in the restaurant.

At Fiola I take [traditional dishes from Le Marche] and elevate it to fine dining. We have 600 wines there and much more formal service.

Casa Luca is the food of my family growing up. It’s inspired by my son, Luca, who is an active little chef, nine years old. He thinks it’s really interesting being with us in the kitchen every weekend, and that’s how the inspiration started.

I also started cooking when I was around that age. My dad was a farmer, and every weekend he took me to farms to do our grocery shopping. He cooked a big Sunday meal every weekend. That’s how my love for that good food started for me. Luca’s hanging out in the kitchen, he gets to see the product, he’s helping with some preparation, he’s even helping with service sometimes.

Why did you decide to open a more casual restaurant?

I always wanted to do something that is more casual. I guess you hear that a lot these days, but I really wanted to make the food that I grew up with. The opportunity came along and it made sense to do that.

Casa Luca’s only been open for two weeks, but how has business been?

It’s been very good. Any time you start a new business, you always have certain expectations. We’re working out the kinks, but we’ve exceeded expectations. It’s been received very well. [The customers] are doing what they’re supposed to be doing, which is sharing and having family-style meals.