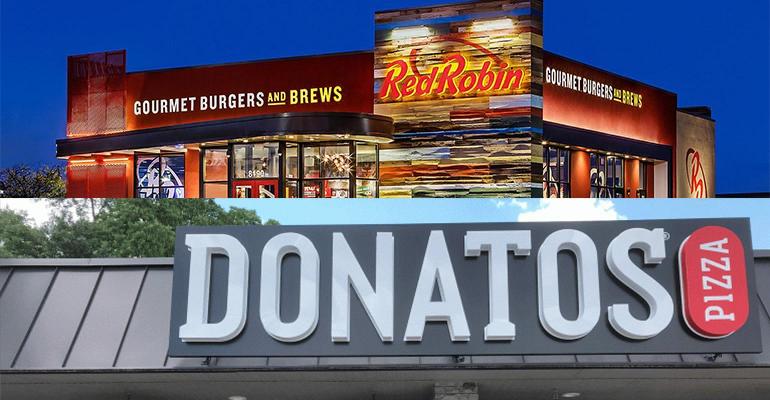 Red Robin expects Donatos in most company-owned units by 2023

The Greenwood Village, Colo.-based casual-dining concept launched the Donatos partnership in 2020, before the COVID-19 pandemic was declared, and earlier this year said it would expand the pizza offering into 120 more of its restaurants this year.

“We believe Donatos will generate annual company pizza sales of more than $60 million and profitability of more than $25 million by 2023, when we have completed our roll out to approximately 400 company-owned locations,” Murphy said.

Donatos will be in 200 of Red Robin’s 443 company-owned stores by the end of this year, he said

“Donatos provides significant growth opportunities, beyond the addition of new restaurants, including an opportunity for growth in catering as we expand this category post-pandemic,” Murphy said.

The company, in its outlook, said it expects Donatos to drive incremental flow-through of $45,000 in the second year, “yielding a three- to four-year payback period.” Start-up costs in the first year include pre-opening expenses of $12,000, first-year marketing investments of $30,000 and capital of $145,000 per restaurant.

Murphy said Red Robin is working to retain off-premise food and beverage sales that grew during the coronavirus pandemic.

In the fourth quarter 2019, before the pandemic, Red Robin’s off-premise sales comprised about 14% of total food and beverage sales, but Murphy said those expanded as COVID-19 restrictions closed dining rooms and are being retained as capacity limits ease.

As of Feb. 28, Red Robin had reopened 372 indoor dining rooms with limited capacity, representing about 87% of its open company-owned restaurants.

Same-store sales declined 29% in the quarter, which was primarily driven by restrictions on dining room capacities in key states, including California, Colorado, Oregon and Washington, Schweinfurth said.