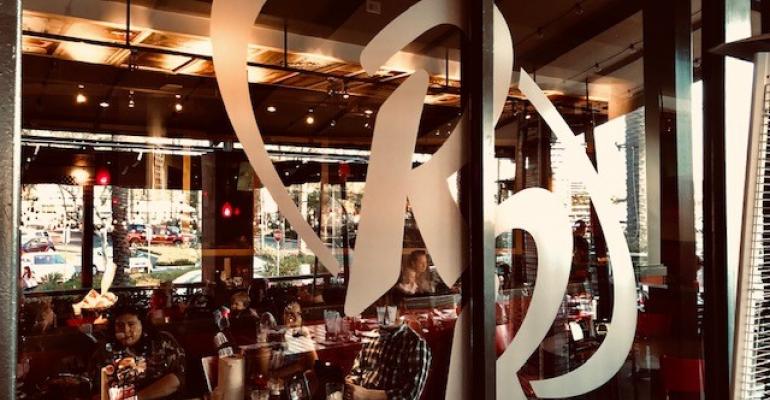 Red Robin’s new CEO Paul Murphy plans to recapture the soul of the brand by correcting operational missteps of the past, expanding the Donatos Pizza test to 100 restaurants, downsizing the menu, improving the quality of core items, increasing beverage sales and taking a different approach to delivery.

“The plan will transform the business,” Murphy told investors at the annual ICR Conference in Orlando.

Murphy (left) was named CEO of Red Robin Gourmet Burgers Inc. in September. A self-described turnaround specialist, Murphy said he is “extremely confident” in his plan to reverse years of declining sales at the Greenwood Village, Colo.-based casual dining chain. He said customers left the brand after a series of missteps including eliminating bussers, which negatively impacted the dine-in experience.

But Red Robin fans are forgiving and willing “re-engage with the brand” if problems are fixed, he said during his Tuesday morning ICR presentation. The brand is already making headway to earn their trust again by rolling out new advertising that focuses on the brand’s family friendly atmosphere, rather than discounting.

“We’re calling it recapturing our soul,” he said. “It’s about moments of connections with Red Robin.”

Here are the highlights of Murphy's Red Robin turnaround plan:

Moving away from promotional marketing

Unwinding “significant discounting” compared to 2018 and the new advertising campaign are making a difference.

In the third quarter of 2019, the brand snapped a six-quarter streak of negative growth when it reported a 1.6% increase in same-store sales.

Red Robin will expand the availability of Donatos Pizza to 100 restaurants this year.

Before Murphy came on board, some Red Robin restaurants began selling eight types of Donatos Pizza for delivery and dine-in. At the time, Red Robin and Columbus, Ohio-based Donatos declined to comment on the partnership.

On Tuesday, Murphy said the chain will expand the availability of Donatos Pizza to 100 restaurants this year.

Nesting the pizza brand into stores “will create buzz and give guests another reason to choose Red Robin more often,” the company said in a presentation to investors.

In 2021 and 2022, Donatos will be available in 150 restaurants. Murphy said adding pizza to the chain’s burger-centric menu makes sense for the brand and consumers.

“It is certainly a game changer for us,” Murphy said.

Fixing missteps in the dining room

While he didn’t provide specifics, Murphy said the brand is working on a new service model at 20 restaurants that corrects missteps of the past.

“I don’t think it’s a secret we made mistakes in some of the things we did with the service model by eliminating bussers,” he said. “It had a negative impact on the business.”

He said the 20-store beta test will begin to roll out nationwide in the second quarter. Technology will play a role in improving service.

The brand’s use of handheld devices to take orders in the dining room is “the precursor for us to begin a new service model,” he said.

Red Robin also plans to roll out a new prototype restaurant in 2020.

To increase the quality of the food and speed of service, the brand plans to decrease the size of the menu by 10%.

Red Robin is also exploring how to improve the quality of core items by using new ingredients so restaurants can “keep pace” with industry rivals, Murphy said.

The chain also plans to step up its beverage game, including its bar menu. Currently, beverages represent about 17% to 18% of total sales. Roughly 7% of that portion comes from alcoholic beverages.

“I believe that number should get up into the teens,” Murphy said of the chain’s bar sales.

Digital and off premise changes

Murphy said the company plans to upgrade its loyalty program to create a better connection with its 9 million members.

“We’re going to speak to each person who is in the loyalty program based on their purchase history instead of spreading offers like peanut butter,” he said.

Murphy said he wants to grow off premise sales by emphasizing catering and pivoting the brand’s approach on delivery.

Specifically, the CEO said he wants to focus on direct delivery where guests order food from Red Robin’s digital platforms.

Often called native delivery, these delivery purchases are margin-friendly because brands are not being charged for an order generated in a third-party app.

Commission fees are lower because the brand is only paying to outsource the delivery. Besides being economically favorable, Murphy said direct delivery allows the chain to collect and retain consumer data.

“However, the competitive environment remains difficult, and we have limited visibility on potential pace of SSS recovery,” the analysts wrote in a note released Monday.