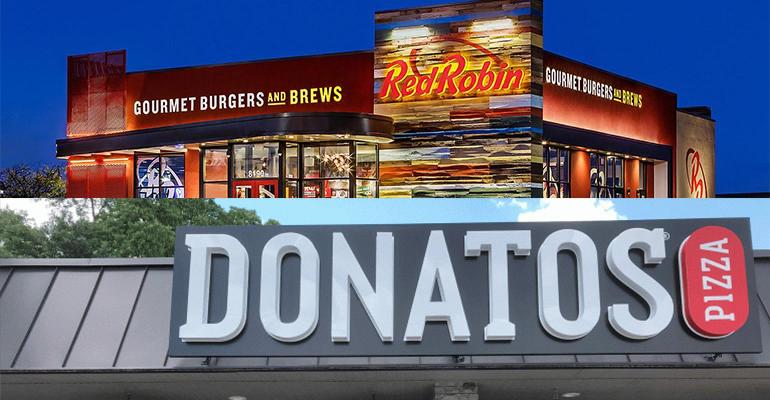 The Greenwood Village, Colo.-based casual-dining brand publicly launched the initiative with Columbus, Ohio-based Donatos at the ICR Conference last year, before the COVID-19 pandemic was declared.

Donatos now is in 79 restaurants, and the Red Robin estimated it will be driving about $45,000 in incremental added sales per restaurant in its second year.

“It really rounds out the menu for Red Robin,” Paul Murphy III, president and CEO of Red Robin, said during a Monday presentation. “As we get the dining rooms open, it’s a product that’s easily shareable. In these times, with the strong off-premise, about two-thirds of pizza sales — in the restaurants that have it — are in the off-premise channel.”

Murphy noted that Red Robin’s off-premise sales in 2020 more than doubled over the prior year as the company dealt with coronavirus restrictions.

Lynn Schweinfurth, Red Robin’s chief financial officer, said restaurants with the Donatos pizza offerings out-performed restaurants that did not have the menu.

Sales at those pizza-partner units were between 500 to 700 basis points higher than those without Donato’s in 2020, Schweinfurth said, adding that the company expects the sales lift to be about 400 basis points in 2021.

“We are really excited about that top-line growth,” Schweinfurth said. “We believe that per restaurant we can generate $45,000 a year incrementally in the second year of the implementation, which allows us to have a three- to four-year payback in terms of the investment around supporting the addition of pizza in our restaurants.”

Capital investment for the Donatos offering is around $145,000 plus pre-opening expense, Schweinfurth said. Red Robin operators do pay royalties for Donato’s sales.

Murphy noted that dine-in customers frequently order pizza as an appetizer and the platform has not cannibalized Red Robin’s burger sales.

During the pandemic, Murphy added, the company has continued to work on its “total guest experience” service model, simplified its menu and refined its management structure for flexibility.

Schweinfurth said the company was continuing to negotiate with landlords, having completed discussions on 75% of its restaurants. Discussions continue on the remain quarter of units. The company said those negotiations resulted in a 3% to 4% savings in occupancy expense over remaining lease terms.

“The portfolio might be further refined,” she said, saying that around 10 restaurants remain closed and may or may not reopen. Red Robin closed five units in the third quarter.

In a pre-release update for the fourth quarter ended Dec. 27, Red Robin on Monday said comparable restaurant revenue declined 28.9% because of COVID-19 restrictions.

“We began the fourth quarter with sequential improvement in comparable restaurant revenue compared to the third quarter, however, momentum stalled due to heightened dine-in and other restrictions in 43% of company-owned restaurants including restaurants in our key states of California, Colorado, Oregon and Washington,” Murphy said in a statement.

Red Robin, founded in 1969, has 540 Red Robin restaurants in the United States and Canada.