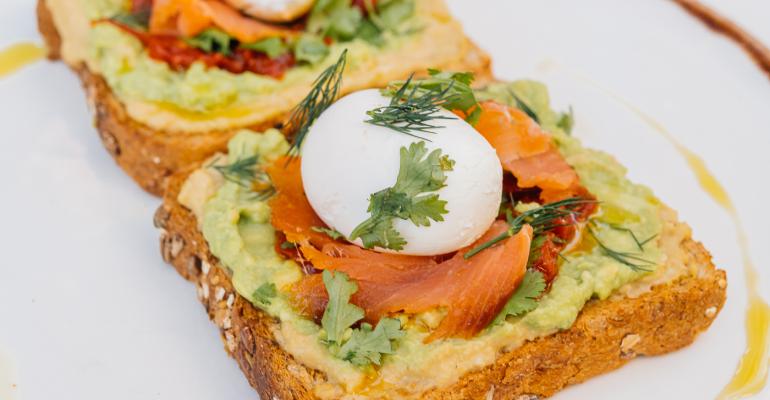 Franchise concept out of Canada plots growth on the West Coast

With the breakfast segment heating up, a Canadian contender has sights set on growth in the U.S.

OEB Breakfast Co., a full-service breakfast concept with 12 units across Canada, opened in Newport Beach, Calif., earlier this month. Brothers Walid and Antoine Daoud are planning to expand the brand across the state under Newport Breakfast Concepts LLC as partners with the Canadian franchise company, with the goal of moving into a master franchisee role — though OEB is not yet registered to franchise in California. The company is franchising in the U.S. outside the Golden State.

The Newport Beach location is the second in the U.S. The first OEB opened in Scottsdale, Ariz., in 2018, as a corporate location.

Chef Mauro Martina founded OEB Breakfast Co. in Calgary, Canada, in 2009 after spending years working in restaurants around the world. Born in Italy and raised in Germany, Martina got his start out of culinary school in Munich and worked in Toronto and Dubai, “getting travel out of my system,” before settling in Calgary.

When Martina decided to marry and start a family, he found restaurant industry hours incompatible. “I wanted to stay in the restaurant business, but I did not enjoy the hours,” he said.

Then, a location became available that would be perfect for an early daypart restaurant, and the first OEB was born.

Now Martina is both the founder and a franchisee. He owns one restaurant, and the rest of the chain is franchised. The growing company expects to reach 16 restaurants in Canada before the end of 2022.

Seeing growing interest in American for the morning daypart, the company opened a corporate location in Scottsdale to test the waters.

Breakfast was booming before the pandemic, though some breakfast concepts suffered during the pandemic as office workers stayed home. More recently, morning traffic is bouncing back. The breakfast daypart had the fastest comeback in sales growth year over year in April, according to market data firm Black Box Intelligence.

Still, competition is also heating up in the space with growth of concepts like Snooze, an A.M. Eatery, First Watch, Yolk, Eggs Up Grill and others. Denny’s Inc. earlier this year announced plans to acquire the 52-unit Keke’s Breakfast Café, which will serve as a higher-end alternative to the family dining-focused parent.

OEB seeks to elevate breakfast a bit further. The name is an acronym referring to a title the concept no longer uses and Martina declined to mention.

The Newport Beach location of OEB is 2,700-square feet with seating for up to 100, with another 25 on the wrap-around patio.

Said Martina: “You don’t walk into a Denny’s and see a Hog & Scallop.”

Like other growing breakfast concepts, OEB will have a full bar, though the Newport Beach location is still waiting for full permits and the bar menu is limited to beer and wine initially.

The Daoud brothers are franchise operators of the Mountain Mike’s Pizza brand under a separate company. They have also operated other concepts and did some food and beverage for hotels before being drawn to the breakfast space for the same reasons as Martina: the hours.

Because OEB isn’t technically franchising in the state yet, Walid Daoud said they will operate as partners with the goal of becoming master developers for California.

CORRECTION: This article has been updated to clarify that OEB is not franchising in California, but franchising is available elsewhere in the U.S.