/sites/all/themes/penton_subtheme_nrn/images/logos/footer.png
Recent
Recent
Solutions to supply-chain woes shared at the National Restaurant Show
May 25, 2022
Flavor of the Week: Korean Barbecue
May 25, 2022
Strengthen Your Website’s Online Ordering Performance with On-Demand Delivery
May 25, 2022
5 food and beverage innovations at the restaurant show
May 25, 2022
Wow Bao launches one of the first loyalty programs in the virtual restaurant industry
May 24, 2022
Featured
Tech Tracker: Toast launches POS solution for quick-service restaurants
May 17, 2022
Memphis Seoul brings Korean BBQ and Southern cooking to Brooklyn
May 11, 2022
Executives on the move: 13 restaurant leaders with new positions in April
May 03, 2022
Zaxby’s names new development, digital-technology chiefs
May 24, 2022
Breakout Brands
brought to you by
News>Emerging Chains

Hash Kitchen brings the party to the breakfast restaurant category 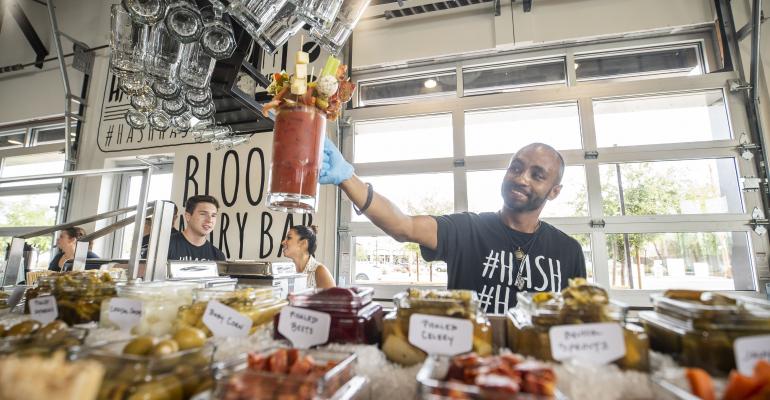 Scottsdale, Ariz.-based emerging brand Hash Kitchen is looking to bring something new to the breakfast table: a party.

Whereas traditionally, casual-dining breakfast and brunch concepts fit into the family-dining category with robust kids’ menus and family-sized favorites, Hash Kitchen CEO and cofounder Joey Maggiore thinks the breakfast category could use some shaking up. Hash offers a Bloody Mary bar, social media-friendly dishes — including a tabletop Ferris Wheel of cupcakes and cereal milk shots — and a DJ on the weekends.

“We’re not re-creating the world of breakfast, but we are creating it for Hash,” Maggiore said. “Everything's over the top, out of the box and in your face. … It's not your average place to go get a cup of coffee. This is a place where you're going to start off the day with a party or finish it with a hangover.”

Take a tour of Hash Kitchen below.

Hash Kitchen accentuates that Instagram-friendly nightclub vibe with mimosas that you can add a cotton candy glitter bomb to, and over-the-top Bloody Marys that come in a blood bag with Type O and Type A+ varieties.

For now, Hash Kitchen brings the party to five locations, but thanks to an investment from Savory Fund announced in November, the concept has two restaurants under construction and four more in the wings. Hash Kitchen hopes to open eight locations by 2023, focusing at first on markets like Denver, Dallas, Houston, San Antonio and Salt Lake City.

“How can we keep thinking outside the box? How will we hit new markets? Can we really be that culture that's driving the breakfast or brunch force?” Maggiore asks. “I think the next two years, you're going to see major growth from us.” 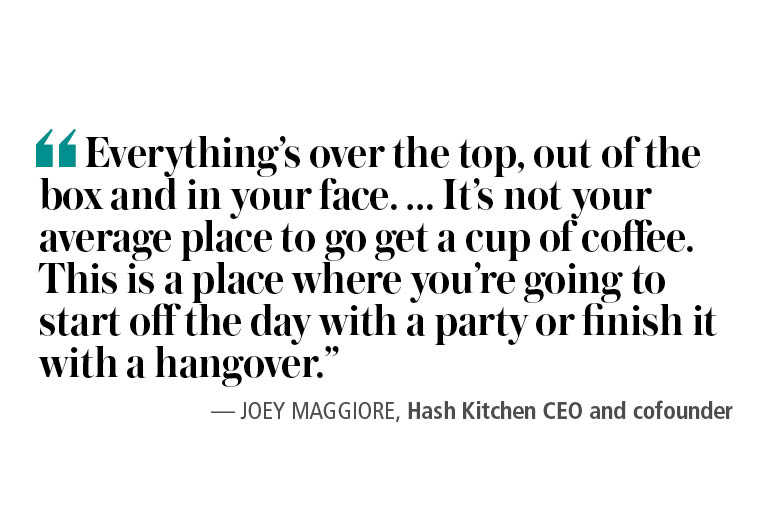 As Hash Kitchen grows, the brand will keep evolving. Maggiore’s business partner, his wife Cristina Maggiore, is developing a new store prototype with updated logos, colors and a design that showcases the personality of the restaurant. Technology will also be a significant part of Hash Kitchen’s future, as the company looks to invest in handheld POS systems that will help cut down on labor needs and wait times for the restaurant.

Maggiore is also constantly thinking about the next big thing to add to the menu. Up next will be a new tabletop Ferris wheel loaded with bourbon-glazed cinnamon rolls.

“If you want to come for scrambled eggs, we’ll have that for you,” Maggiore said. “But everything at Hash is you feast with your eyes first.”