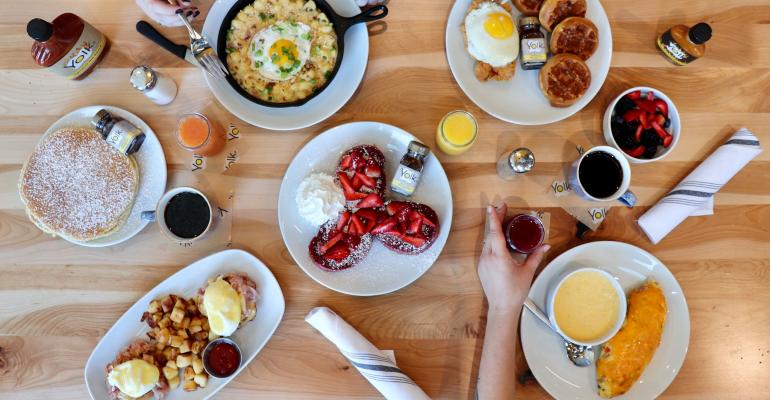 This year, Yolk plans to open two more South Florida units and another in the Dallas-Fort Worth market.
News>Regional Chains

Breakfast all day, what could be better? That’s the idea that the restaurant Yolk was founded on back in 2006.

The breakfast concept, with 16 locations in Illinois, Florida, Texas and Indiana, is open daily from 7 a.m. to 2:30 p.m. and serves breakfast all day. The concept got its start in downtown Chicago.

The restaurant’s most popular dish is eggs benedict with a hollandaise sauce, the recipe for which has been passed down in the owner’s family for 40 years. Other favorites include the red velvet French toast and the cinnamon roll French toast, both developed in the chain’s test kitchen, located in Chicago.

It may seem strange for a chain this small to have a test kitchen, but it just works for Yolk.

“We wanted to stay relevant and grow and keep up with customer demands and the kind of trends that were happening in the industry,” said Yolk’s director of marketing and communications Gianluca Pesce. “We have locations in Texas, Florida. Indiana and Chicago, so they’re not exactly close [to each other]. When you’re spread thin, it’s hard to implement new things without having to test them first.”

The test kitchen was developed when the chain had around a dozen locations and has been churning out recipes ever since.

“But it’s something we’re proud of, to be where we really are. We started with the idea [that] we wanted the community’s feedback, we wanted the people to come in and tell us, ‘Hey, we love this’ or ‘Hey, we hate this,’ and let them influence where we go in the future,” Pesce said.

The test kitchen also functions as a working unit, complete with Yolk’s first coffee bar. CEO and founder Taki Kastanis  wanted to invest in the chain’s coffee program just before the pandemic began.

When branching out into the suburbs, this city-focused brand used ghost kitchens to test new markets first before making the leap and buying real estate. Yolk opened its newest location, in the Chicago suburb Burr Ridge, during the pandemic, despite having to close two other units.

“We were getting lots of orders [through the ghost kitchens] and that helped us stay afloat,” Pesce said.

Yolk doesn’t plan to use the ghost kitchen model to expand post-pandemic.

“Now that the pandemic is behind us, our expansion plans have kind of returned to what they were pre-pandemic, which is just opening up physical locations,” Pesce said.

The Burr Ridge location is standard at 4,500 square feet and seats about 175 people inside and 45 people outside. Unique to this location is a walk-up coffee bar accessible from both the interior and exterior of the unit.

This year, Yolk plans to open two more South Florida units and another in the Dallas-Fort Worth market.