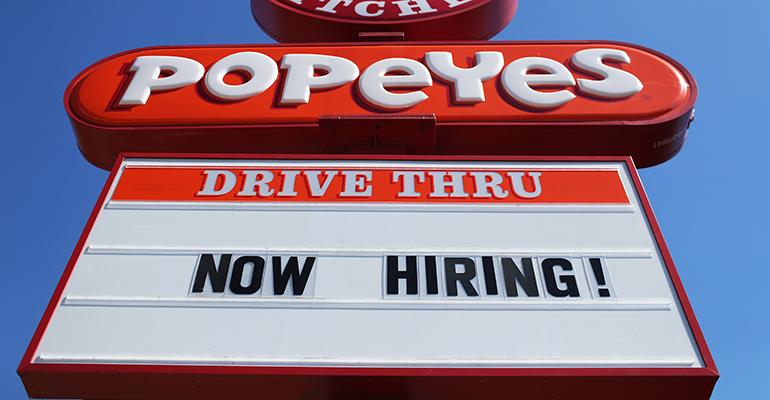 Can the restaurant industry labor crisis ever be solved?

You’ve seen the stats, and they’re not pretty. From March to April of last year, restaurants and bars lost 5.5 million jobs, according to the Bureau of Labor Statistics.

“Those jobs are coming back,” said Danielle Wiener-Bronner, a CNN Business writer, in an April story. “Restaurants and bars added about 176,000 jobs in March 2021.”

But you’ve seen the signage, and it’s even uglier. Outside reader boards affixed below restaurant logos were designed to promote food and beverage to passing cars and pedestrians. They’re now exclusively deployed as visual want ads; touting $50 bonuses for simply interviewing, and a new iPad or $400 signing bonus after 30 days of employment. Where’s the terminus to this slippery slope of commitment? A terabyte of Bitcoin? A one-year Tesla lease?

These are serious times for talent acquisition and the competition across industries for open jobs has yet to peak. The former labor pool has shrunk to a puddle, so new realities — and strategies that address those realities — must be addressed now. The fact is that of the 5 million-plus foodservice workers who lost their jobs last March, many have found employment outside our industry and no longer see the restaurant business as their preferred employer of choice. To paraphrase Norm from TV’s Cheers, when it comes to finding and hiring exceptional people, it’s a dog-eat-dog world out there and we’re wearing Milk-Bone underwear.

It used to be easy to say that we don’t have a “labor crisis,” we have a turnover crisis. And that is still very much true to a great extent: Job one is retaining the good people you have so you don’t have to search for new ones. “Good to Great” author Jim Collins concurs: “The single biggest constraint on the success of any business is the ability to get and to hang on to enough of the right people.”

There is good news among the bad news relative to staffing: You don’t have to solve the industry’s labor crisis, you just have to solve your own. This month let’s explore some creative ways to do just that.

Show daily appreciation to your teams. Those who stayed with us throughout 2020 and those who have just joined our team deserve daily kudos, recognition and encouragement. It’s a huge tell if your primary recognition program occurs every two weeks and is called a paycheck.  And this appreciation should extend to managers as well as hourlies. Consider the stress put on general managers and assistant managers when they’re short-staffed:  We ask them to think “like owners,” then enact labor schedules that force them to cover positions as hourlies during peak periods. How can they realistically create a better team and guest experience when they’re on the field playing instead of coaching?

Create a culture that attracts performers. If you want to improve the customer experience, you start with the employee experience. Instead of looking for a “roomful of rockstars” why don’t you start with the room itself? Engage your employees on a daily basis. You engage team members the same way you satisfy customers: Be clear on their expectations, exceed those expectations whenever possible, eliminate their complaints in advance, overdeliver on a key benefit, and remind them of what you are achieving together. Show them dignity, care, respect. Feed the positive. Weed the negative. Eliminate cynicism and sarcasm from the workplace. Be so positive that negative people hate to be around you.

Develop your team members daily.  Leaders who are serious about hiring also have to be serious about teaching. Training should focus on doing things rather than just knowing things—and, in particular, on bringing everyone’s skills closer to the level of the best performers in a given area. Show your employees not just how to be better workers; show them how to be better people, partners, spouses, and community members. This means managers must put a premium on communication and strategic clarity.

Are you serious? Do you think I might actually have “secrets” to finding and hiring great people that you haven’t heard or considered already? The fact is that there is no “silver bullet”. Sometimes you’re just lucky to be fully-staffed and other times you have to pay people simply to interview and then reward them with a Samsung Tablet for staying with you. But the absolute best advice I can offer for long-term employee retention is to create a restaurant culture and workplace that people are dying to get in on and not scheming to get out of. Focus daily on 1) sharing the purpose and value of what we’re achieving together and 2) building and maintaining trust and respect with every team member. There is no “one way” that works to find and hire great people. If there was, we’d already be doing it.

UPDATE: This column has been updated to remove a potentially misleading reference to National Restaurant Association data.

Jim Sullivan’s clients include Panera, Chipotle, McDonald’s, Domino’s and Texas Roadhouse. His bestselling books Fundamentals and Multiunit Leadership are available at Amazon and Audible. Join his 400K social media followers at LinkedIn, YouTube and Twitter for daily lessons in leadership. His websites are Sullivision.com and MultiUnitLeadership.com.