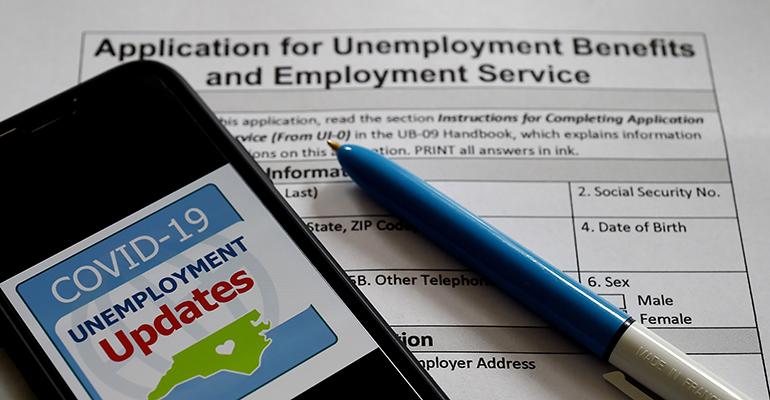 OLIVIER DOULIERY / Contributor / AFP
Unemployment numbers from April 2020 show that the restaurant and bar industry was hit the hardest by coronavirus-related layoffs.
Operations>Workforce

The number of job losses skyrocketed by 20.5 million in April, increasing the national unemployment rate to 14.7%, the largest monthly jump ever recorded, the U.S. Labor Department said Friday.

Putting the blame squarely on the coronavirus pandemic, the data from the Bureau of Labor Statistics, or BLS, indicated that the leisure and hospitality industry was particularly hard hit. Employment in that sector plummeted by 7.7 million in April, with almost three quarters of that decrease specifically in restaurants and bars, which accounted for 5.5 million of the job losses.

Because government-mandated shutdowns of restaurant dining rooms occurred mostly in March, April was the first full month to reflect the job devastation nationally. It was a sharp contrast to February, when the nation’s unemployment rate was only 3.5%.

For the week ending May 2 alone, more than 3.2 million Americans filed for unemployment benefits, a decline of 677,000 from the previous week's revised level of 3.8 million, the Labor Department said Thursday. But the 33 million seeking benefits over the seven-week period in March and April was reportedly more than all the jobs created since the Great Recession.

Labor Secretary Eugene Scalia said in a statement that Friday's BLS report reflected “the massive impact that measures to contain the coronavirus have had on the American workforce.”

He called the employment situation “exceptionally fluid,” noting that the data released Friday reflects neither the additional layoffs that occurred in late April and early May, nor the employees beginning to return to work in some states.

“We also know that, by reopening safely, we have the capacity to avoid permanent job losses for the overwhelming percent of Americans who, the report shows, currently view their job loss as temporary,” he said.

For restaurants, however, the ability to rehire workers is likely to be hampered by the gradual return of dine-in business, as many states take a phased approach. In states where restrictions are being lifted, most are limiting dine-in capacity to allow for social distancing, forcing many employers to take a gradual approach to rehiring.

Some workers are reluctant to come back to work because they are making more on unemployment, or they are concerned about contracting the virus.

And with the coronavirus death toll continuing to climb, the potential for another shutdown period remains a threat to job security for those who are able to return to work.

Restaurants also face the additional burden of an economy upended. With job losses come cuts in consumer discretionary spending, like dining out.

Fiona O’Donnell, director of market research firm Mintel, said in a statement that consumer confidence is likely to contract sharply this year.

“As the economic implications of COVID-19 unfold, Americans are simultaneously dealing with not only immediate concerns around physical health and lifestyle changes but also longer-term concerns about their financial health,” she said. “Fewer Americans working means less spending and a focus on the necessities. … The usual sectors like dining out, travel, out-of-home entertainment and others that support personal indulgence have largely already been eliminated and consumers have learned that they can do without.”

Responding to the job report, the Independent Restaurant Coalition on Friday reiterated its call for a $120 billion stabilization fund to help the nation’s 500,000 independent restaurants, which the group contends were the first to close and will be the last to reopen.

“A quarter of the people who lost their jobs last month worked in a restaurant, yet we’ve seen nothing from Congress that will help ensure these people will  have jobs to return to when this crisis ends or that will save an industry that contributes $1 trillion to our economy,” the IRC said in a statement.

Congress is reportedly preparing to debate another round of relief funding to follow the $660 billion pledged for the Paycheck Protection Program, or PPP, forgivable loans. The IRC said changes to the PPP program are needed, but those fixes are still “an eight-week Band-Aid for an 18-month problem.”

Citing Small Business Administration data, the IRC said only 8.9% of PPP loans went to the food services and accommodations industries, though restaurants have suffered the worst job losses.

Meanwhile, 80% of independent restaurant operators in lockdown cities were not certain they could reopen after the pandemic ends, according to an IRC survey with the James Beard Foundation in mid-April.