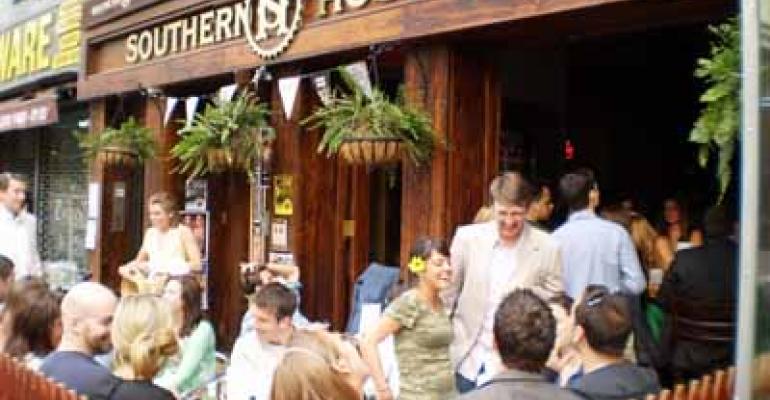 Rocker and frontman for the band OneRepublic, Ryan Tedder, has signed on to become the first franchisee of the Southern Hospitality BBQ brand out of New York, with plans to bring the Memphis-style barbecue concept to at least 10 cities across the country.

A celebrity magnet known for its barbecue menu, as well as a full bar with specialty bourbons and in-house beers, Southern Hospitality BBQ first opened in New York City in 2007.

The concept is the creation of founder Eytan Sugarman, with input from close friend Justin Timberlake, the musician and actor, and a Memphis native. Sugarman opened a second “growth prototype” for the concept in New York’s Hell’s Kitchen neighborhood in March with Tedder, whom he also described as a close friend, as a partner.

Sugarman said Tedder played an active role in developing the Hell’s Kitchen location and, having seen the brand’s potential, signed on as a franchisee to bring the restaurant to other cities.

“It took us a while to get the menu the way we wanted, and the right look and vibe and feel of the restaurant, but now we’re ready to grow,” Sugarman said in an interview with Nation’s Restaurant News on Monday.

Tedder is joined in the franchise venture with Accredited Members Holding Corp., based in Colorado Springs, Colo., and parent to an investment research and consulting firm.

Calls to Accredited Members were not returned by press time, but J.W. Roth, the company’s chief executive, said in a statement, “Our intent is to build a powerful network of Southern Hospitality BBQ restaurants across America, building on its emphasis on quality food, great service and excellent ambiance, combined with a celebrity component.”

Roth added that the Southern Hospitality BBQ brand “has certain intangibles that differentiate it from its competitors, which we believe will resonate with guests around the country, as it has in New York.”

In a statement released Monday, Tedder said, “I have been involved with Southern Hospitality BBQ in New York for some time, and I’m looking forward to taking this relationship to the next level.

“Southern Hospitality BBQ is the ultimate place to hang, bring your friends, family and enjoy the greatest food, drink, vibe and energy you can plug into anywhere,” Tedder added. “It’s like no other restaurant.”

Sugarman said he is planning to continue growing company locations of the brand in New York and other select cities, as well as bringing in other franchisees, both domestic and international.

Southern Hospitality BBQ is a casual-dining concept with an average ticket of $35 to $40, Sugarman said.

New locations will range in size between 3,000 and 6,000 square feet. The Hell’s Kitchen location seats about 240 with two floors.

Nelson Braff, a partner in Southern Hospitality BBQ, said the company does not release sales figures. However, he said, “We’ve exceeded our projections.”

Sugarman also operates Strawberry’s Sports Grill in New York with former baseball player Darryl Strawberry, and Braff said the company is working on other new concepts they are not ready to disclose.