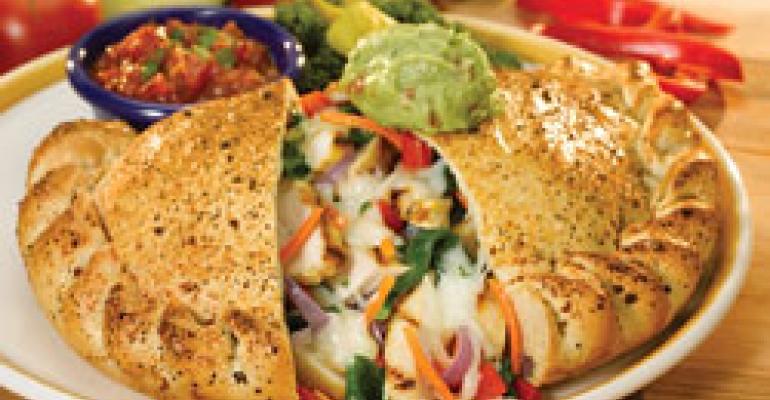 In a move it believes will build traffic, the Old Chicago casual-dining chain has introduced 12 new menu items, including calzones with toppings and big-flavored but “lighter” tortilla wraps.

Mike Thom, director of culinary research and development for the 100-unit chain owned by Rock Bottom Restaurants Inc., said the new dishes were “specifically created with the taste preferences of the Old Chicago guest in mind.”

“We improved some of our bestselling items, intensified flavors and simply gave our guests a greater variety of options to choose from,” he said of the menu development project, which took about eight months to complete.

Thom added, “We do think that variety will encourage our guests to visit Old Chicago more often.”

Though Old Chicago, which counts pizza and beers of the world as among its specialties, has offered calzones for 34 years, the new Hot Texican Beef, Monterey Chicken and Italian Grinder varieties are the first offered with toppings, the chain said. They are priced from $9.69 to $9.99.

The Texican calzone, which is filled with seasoned ground beef, green bell peppers, jalapenos, black beans, red onions, and melted mozzarella and cheddar cheeses, is drizzled with garlic cheese sauce and served with a choice of salsa or pizza sauce. The Monterey Chicken calzone is filled with roasted chicken, chopped spinach, julienne carrots, red onions, red bell peppers, and mozzarella, ricotta and Parmesan and is topped with guacamole and salsa. And the Italian Grinder calzone is filled with Italian sausage, beef meatballs, pepperoni, roasted onions and peppers, mozzarella, ricotta and Parmesan and comes topped with shredded lettuce, onions, tomatoes and a drizzle of house-made Italian dressing.

- A Malibu Veggie specialty pizza, $9.99 to $19.99, depending on the size, is topped with fresh spinach, salsa, diced tomatoes, carrots, olive oil, red onions, red peppers, and mozzarella, ricotta and Parmesan, as well as guacamole.

- Buffalo Chicken Rolls, $7.49 to $8.29, are made from pizza dough and filled with Buffalo-style chicken, mozzarella and house-made blue cheese dressing and topped with a drizzle of Buffalo sauce, celery and carrot shreds and served with a side of blue cheese dressing.

The new menu items also include a salad, three pastas and a dessert, according to Old Chicago, which has 64 company-operated and 36 franchised restaurants.

Thom said the prices for the new menu items are “on par with our competitive set and fall within a price range that guests have come to expect at Old Chicago.”

While he did not name the items removed from the menu to make way for the new fare, Thom noted that keepers included “top sellers and guest favorites.”

“With the items we removed, we were able to eliminate some SKUs in the kitchen and free up space on our production lines,” Thom said. “Our changes will most certainly increase efficiencies and productivity, while allowing us to keep all of our popular, signature items on this new menu that our guests love.”

Thom said Old Chicago has felt the impact of a recessionary economy as have all restaurant companies, but he added that the chain’s appeal as both a bar and a dining destination has helped it weather the downturn.

“We are on track to have a positive quarter, and we think the new menu rollout also will provide a boost,” he said.

“And Old Chicago always sees a traffic boost for those promotions," he said.