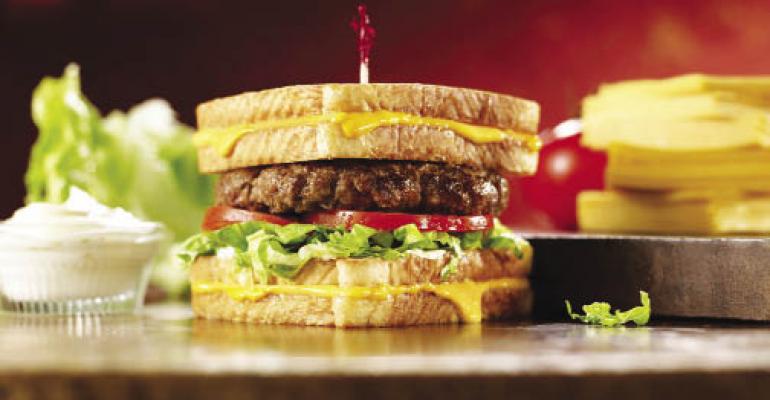 With the addition of a headline-grabbing burger creation and a limited-time offer of a Northeastern coastal favorite, the hot-food side of Friendly’s menu has been sizzling lately.

But executive chef Andre Fuehr knows that the chain’s bread and butter pecan, so to speak, is ice cream.

“If you really want a picture of what the center of the bullseye looks like, it is ice cream,” he said, “and the next ring out is burgers and SuperMelts. That is a big part of our focus in menu development — making sure that we have the best sundaes, best melts and best burgers that are craveable.”

With that in mind, Fuehr and his team added an attention-getting item to Friendly’s main menu this year: the Grilled Cheese BurgerMelt, or two grilled cheese sandwiches with a burger patty in the middle. Fuehr said the decadent dish was not designed to compete with the such chains as Hardee’s, Carl’s Jr. and KFC, which also have introduced mammoth portions or over-the-top offerings in recent years.

“I know that some articles said we were trying to outdo KFC and all that,” he said. “It wasn’t like that. We were just trying to come up with a really memorable product.”

In fact, he said Friendly’s history made the chain an ideal place for the grilled cheese and burger mash-up.

“Burgers and melts being combined is kind of a heritage product for Friendly’s,” he said. “That was how we originally sold burgers, on something called a set up. If you wanted it with cheese, it was kind of the diner-speak of the era; you ordered it with a set up. They would give you a grilled cheese sandwich, and they would peel it open and put the cooked burger in the middle. And you can get the specials with lettuce, tomato and mayo.”

Fuehr said he and his creative team saw double grilled cheese and burger dishes at some independent restaurants, so they cooked up a version in the Friendly’s test kitchen. It worked, and sales have been better than expected.

“It is actually outperforming our forecast,” he said. “It is not the top-seller on the menu, but it is doing really well.”

One of the chain’s recent LTOs, a lobster roll with coleslaw priced at $11.99, did well enough in a test last year to merit a run this summer.

“It kind of surprised us with how well it did. We didn’t know if we were going to be a destination where someone would come in and spend 12 bucks on a lobster roll,” he said.

“Those stores located closer to Maine and along the coast did better. Probably central Pennsylvania didn’t do quite as well. And we kind of predicted that in our forecast.”

Friendly’s operations team rolls out four or five new products between six and eight times a year, but the execution was a bit different than normal with the lobster roll, Fuehr said.

“This one — having a much higher food cost — had a lot of the field’s attention, as far as making sure things were done correctly, as far as waste and usage and all that,” he said. “The ops guys are great [at] rolling out products. Every couple of months we are rolling out four or five new items. That is a pretty honed team that is out there implementing the things that we come up with.”

Developing hot food products is important, Fuehr said, because the chain actually sells more of those dishes than ice cream. Still, he knows that the cold and sweet products have been the backbone of Friendly’s since the first store opened in Springfield, Mass., in 1935.

“If you look at the numbers, we do sell more hot food than ice cream,” Fuehr said. “It is a bit of a challenge from a positioning or marketing standpoint. In marketing speak, the biggest return on investment would be on food, because that is what we sell the most of, but people know us because of ice cream.”