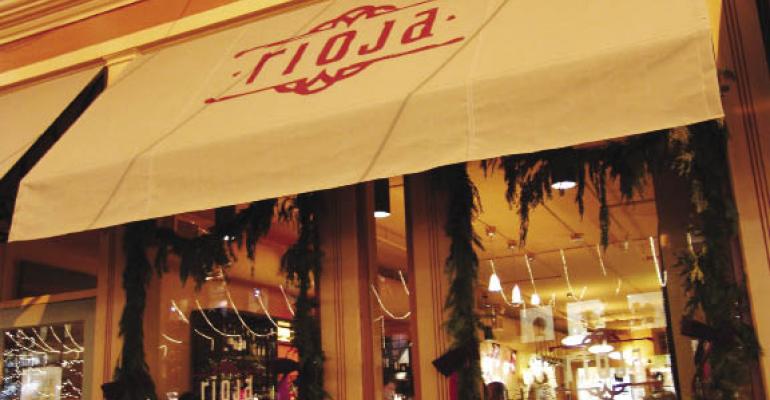 One of the keys to running a successful fine-dining restaurant in a city as casual as Denver is understanding just how the people there like to splurge. And chef Jennifer Jasinski and general manager Beth Gruitch have done just that at Rioja, according to observers.

“I call Jennifer Jasinski the ‘lamb whisperer,’” said Denver Post food editor Tucker Shaw. “She’s an excellent chef by any standard, but fits particularly well in our Denver community because her sensibility — in terms of the flavors she uses and the techniques she employs — is very Colorado.”

“Her food is so bright on the palate,” Faison said. “I think it’s such a reflection of chef Jen, because as a personality she’s so bright. There’s a freshness and crispness that I really feel you see in her cuisine.”

Jasinski came by her casual nature honestly, having been raised unpretentiously by a single parent in Santa Barbara, Calif. She and her siblings took turns cooking, but her natural aptitude meant that eventually she was in full-time control of the kitchen.

After culinary school, first at Santa Barbara City College and then at The Culinary Institute of America in Hyde Park, N.Y., Jasinski spent some time working at The Rainbow Room in New York before returning to Southern California.

Soon, she found herself under the wing of chef and restaurateur Wolfgang Puck at his Beverly Hills, Calif., flagship, Spago.

She stayed with him for 11 years.

“When I was working at the original Spago, Wolfgang only had Spago and Chinois [on Main],” Jasinski said. So she got to work closely with him, both in the kitchen and in the dining room, watching how good he was with the guests.

She first visited Denver with Puck, who had been hired by members of the city’s elite to cater some parties.

“I was kind of fed up with Los Angeles at the time,” Jasinski said. “And I had worked for Wolfgang for so long. That was wonderful, but I felt like I needed to challenge myself a little more — step out on my own and really see, without Wolfgang’s name behind me, how I would do on my own. I just took a leap of faith, and it’s been great.”

In 2000 Jasinski started as executive chef of Panzano, the signature restaurant of the Hotel Monaco, a property in Denver run by San Francisco-based Kimpton Hotel & Restaurant Group LLC. There, she met Colorado native Gruitch. In 2003 the two decided to go into business together, and a year later, they opened Rioja.

Since then, Jasinski and Rioja have won acclaim throughout the city, including Jasinski being named Chef of the Year by Denver Magazine in 2010, and Rioja being named the best restaurant for an expense-account diner by local city paper Westword.

From the chef: In their own words

A native of Santa Barbara, Calif., Jasinski spent most of her formative years working for Los Angeles-based celebrity chef and restaurateur Wolfgang Puck before deciding to strike out on her own. She speaks with Nation's Restaurant News about her culinary career.

What first brought you to Denver 11 years ago?

“I was kind of fed up with Los Angeles, and I had worked for Wolfgang [Puck] for so long. That was wonderful, but I felt like I needed to challenge myself a little more, step out on my own and really see without Wolfgang’s name behind me, how I would do on my own.

I had visited Denver with Wolfgang to do some parties and I thought it was a nice city. I like to ski, I like the outdoors, and there’s a good art and music scene here.

Wolfgang was a huge influence on me for sure. When I was working at the original Spago, he only had that restaurant and Chinois [on Main], and he worked closely with everybody all the time.

He really impacted my style, but so did so many other chefs who worked at those restaurants, like Mako Tanaka and Hiro Sone. They taught me so much, especially about fish.

David Gingrass taught me about sausage and those types of things.

And then there were jus so many good cooks, because everyone wanted to work for him in the early 90s — Mitchell and Steven Rosenthal, Govind Armstrong. All of those people have their own restaurants now.

Spago was a fine dining restaurant, and casual, too. So is Rioja. That’s how [business partner Beth Gruitch] and I like to dine, to have the best food and drink but to be able to laugh out loud.

We don’t want it to be a special occasion restaurant, so people can come in more than once a year.

How has the Denver restaurant scene changed since you arrived in Denver?

It’s gotten so much better. There are so many more options now. The protégés of [older] chefs are doing their own things. Also good people and restaurants are moving to town because they like the city. It’s growing at a great pace.

What advice do you have for other restaurateurs?

If you cheap out, the customer knows it. Try to buy the best ingredients and give customers value in every expression. If you run a taco stand, you want it to be the best taco.

You have to constantly look at what your doing, to say ‘I know we’ve been doing it this way for two years, but maybe we could try it a different way.’ If you sit on your laurels, you’re going to fade away, I think.

It’s also important to look around, travel, put new ideas in place. And it’s all about having good people around you, who share your vision.