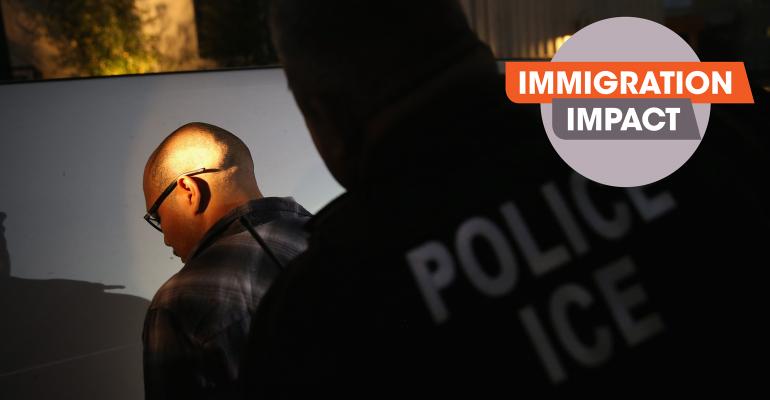 Restaurant operators around the country are bracing for an expected uptick in document audits and potential worksite raids in light of a tougher stance on immigration by the Trump administration.

Those broader orders marked a shift from the Obama administration, which in 2014 put priority on deporting those convicted of a crime. Trump’s approach, however, appears to target virtually anyone in violation of federal immigration laws.

Related: For many immigrants, restaurants are the American dream

“This administration is really undertaking an all-out assault against all types of perceived immigration violations across the board,” said attorney Susan Cohen, chair of the immigration practice at law firm Mintz Levin in Boston.

Across the country, that shift has left immigrants, both documented and undocumented, living in fear.

Employers, likewise, are worried, not only about the potential loss of workers they depend on, but about the potential for crippling penalties that audits can bring — even the possibility they could face criminal prosecution for hiring unauthorized workers.

“I think employers should not rest easy,” said Cohen.

Indeed, Leon Rodriguez, the former director of U.S. Citizenship and Immigration Services, or USCIS, until just a few weeks ago when he joined law firm Seyfarth Shaw in Washington, D.C., said restaurant operators and their workers should be concerned.

“As of right now, we haven’t seen worksite raids of the kind we were seeing around 2009, and I’m not aware of any plans to reinstitute that practice,” Rodriguez said. “On the other hand, the administration has been very clear about its intention to broaden the classes of individuals who could be subject to deportation.”

Attorneys say employers should prepare now for what will likely be increased scrutiny. As in the past, those efforts will likely target the restaurant industry, which has long provided work — whether unknowingly or knowingly — to the undocumented.

Of the nearly 12 million workers employed in food preparation and service across the country, about 9 percent are believed to be unauthorized, according to the Migration Policy Institute.

Restaurant Opportunities Centers United, or ROC, however, reportedly estimates undocumented workers representing much as 45 percent of the restaurant workforce in major cities, like New York, Chicago or Los Angeles.

Under Obama, however, ICE shifted its focus from undocumented workers to the employers who hired them. The goal was to “deter illegal employment and create a culture of compliance,” ICE said at the time.

Chipotle Mexican Grill, for example, took a hit in 2011 when it was forced to let go of 450 employees after an ICE audit questioned the veracity of hiring documents.

The audit led to civil and criminal investigations by the U.S. Attorney for the District of Columbia and the U.S. Securities and Exchange Commission. Company officials said those charges have since been “resolved,” but did not specify the resolution.

Worksite arrests, however, have declined since 2011, according to ICE data reported by the Los Angeles Times.

“Unauthorized workers create vulnerabilities in today’s marketplace by presenting false documents to gain employment, completing applications for fraudulent benefits, and stealing identities of legal U.S. workers,” said spokesperson Dani Bennett. “Employers need to understand that the integrity of their employment records is just as important to the federal government as the integrity of their tax files or banking records. All industries, regardless of size, location and type, are expected to comply with the law.”

No significant increase in worksite raids yet

ICE officials, for example, announced the arrest of 248 undocumented immigrants over two weeks in March in mid-Atlantic states in a routine fugitive team operation that targeted criminals, deportation dodgers, re-entrants and other violators. In addition, 61 were also arrested in a separate sweep in Nevada, ICE said.

And there were reports of another 26 netted in Minnesota, and hundreds arrested in six states in January.

It’s not clear whether any worked in restaurants, but those investigations appear to have targeted criminals or those with prior deportation orders.

“These operations still all seem to be following the pattern that occurred during the Obama administration where the focus was on a very specific list of people that had been removed, or had a criminal violation and hadn’t been transferred from a local jail into ICE custody,” said Randy Capps, director of research for U.S. programs for the Migration Policy Institute.

Recent worksite enforcement efforts specifically in restaurants include the detention of 55 people in February after an immigration raid involving several Mississippi restaurants, including a local chain called Ichiban, as well as sister brands China Buffet and Sake Sushi. The raids were the result of a year-long federal investigation, according to the Jackson Clarion-Ledger.

The Aroma Buffet & Grill in East York, Penn., reportedly had to close for two weeks in February after four workers were arrested in an immigration raid. One of them was a manager, according to the York Daily Record.

Former Houston food truck operator Armando ‘Piro’ Garcia was reportedly detained in February and was awaiting deportation.  And the manager of a La Fiesta restaurant in Illinois was arrested at his home but later released on bail. He still faces possible deportation, despite a community-wide rally on his behalf.

A key factor in any potential uptick in worksite enforcement actions, however, will be whether Congress approves funding for a proposed vast expansion of the federal government’s border patrol and immigration enforcement arm, Capps said.

“If they’re able to grow the size of the ICE workforce, that will change things,” said Capps. “The administration plans to hire 10,000 more officers, but that would take several years, even if they were to get full funding from Congress.”

The message for employers is that compliance is more important than ever.

“It goes without saying that employers should not knowingly hire or continue to employ individuals who are unauthorized to work,” said Richard Rawson, a business immigration attorney

with Davis Wright Tremaine LLP in Seattle. “If employers know [workers] are unauthorized, they should terminate them because the prospect of being caught is looming larger than it has in the past.”

But determining who is unauthorized to work is the challenge.

Employers are required to ask workers for appropriate documentation with completed I-9 forms and to accept documents that appear legitimate.

Some states mandate use of the federal E-Verify program, which verifies eligibility to work in the U.S. Where it is optional, some employers use E-Verify voluntarily, but it’s still used by a small minority nationally, said Rodriguez.

But using E-Verify incorrectly also has its hazards, as some employers have been charged with discrimination.

Cohen argued that restaurant operators should invest in good legal counsel to help them ensure compliance with both the I-9 process and using E-Verify.

“Go in proactively to clean up your documents and get your house in order before anything happens,” she said. “If you can establish good faith in record keeping and a demonstrated intention to comply, you’ll be ahead of the game and could see less in the way of penalties.”

Rather than worksite sweeps, a more likely scenario would include individuals arrested or detained outside of work. If that individual reveals where he works, it could prompt ICE to pay the employer a visit and others could be swept in as well, said Rodriguez.

But employers should know they have the right to ask for a warrant, and if that warrant names a specific employee, other workers are not obligated to give information about their own status.

In fact, attorneys recommend that employers have an action plan and standard operating procedure for ICE visits.

“Everyone should know who’s responsible for what, and they should undergo a fire drill to simulate the ideal way to deal with that,” said Cohen.

In California, the Immigrant Worker Protection Act was introduced in March in a direct challenge to potential Trump administration worksite raids there.

The bill would require California employers to ask ICE agents for a warrant, and would prevent employers from sharing confidential employee information without a subpoena. Workers would need to be notified of a potential raid or I-9 audit, and the labor commissioner would also need to be involved in any worksite enforcement to offer a measure of oversight.

Despite the risks, some in the industry, however, are shifting into a more protective mode on behalf of their workers.

One unidentified chef arranged to take over guardianship for 13 of his staff members’ children in case their parents were deported, according to The New York Times.

And workers at a Chapel Hill, N.C. barbecue restaurant have stopped driving, relying instead on fellow employees with proper documentation to get them to work, the report said.

Such measures, or things like helping a worker find legal representation in the event of an arrest, would not be seen as “harboring” unauthorized workers, said Rodriguez.

“To the extent that workers feel their bosses have their backs, that’s good for loyalty and workforce moral,” he said.

Hundreds of restaurants have joined the Sanctuary Restaurant movement, an initiative sponsored by ROC and Presente.org.

The Golden Gate Restaurant Association, for example, is one of the only restaurant industry groups to join the Sanctuary movement, a decision made in part to allow members to participate without signing up individually.

“Our immigrant labor force is the backbone of the industry here in San Francisco,” said Gwyneth Borden, the GGRA’s executive director. “But it’s hard because individual restaurants don’t want to become targets. This way we can provide umbrella coverage that helps restaurants become more engaged in the movement. There’s safety in numbers.”

In March, the GGRA launched a series of workshops to help restaurant operators and their employees protect themselves against “federal policies that are becoming increasingly hostile toward immigrants.”

“It’s an opportunity for our members and their workers to know what their rights are, to know what to do if ICE shows up at their home or workplace,” said Borden.

Though worksite arrests have been “more threat than reality,” so far in San Francisco, Borden said association members fear an increase in enforcement will worsen what is already a severe labor shortage across the city.

The year for reform?

Borden and restaurant operators across the country, meanwhile said a solution must be found through comprehensive immigration reform.

“Fair or unfair,” said Borden, “the economy is built on their labor.”

Some path to citizenship is particularly vital, given the industry’s struggles with labor, said David McDougal, CEO of the Nashville, Tenn.-based Back Yard Burgers, which, he noted, uses E-Verify.

“We need a clear path to legal immigration, which will provide our industry with a pool of great workers and will help relieve the extremely tight labor market,” McDougal said.

Though his company is strict in hiring only those with proper documentation, he said, unauthorized immigrants do work in foodservice.

“These are mostly hard-working, exemplary employees and I think it would be a better strategy to figure out a clear path to citizenship,” said Saginaw. “There’s no reason why they wouldn’t want families that go to work every day and pay their taxes and support the economy.”

Meade at the NRA, meanwhile, was hopeful the Trump administration will pivot and dive deeper into immigration reform, including a year-round essential worker program that would allow immigrants to work legally.

“Right now, everyone’s consumed with repeal and replace” of Obamacare, said Meade. “But members of Congress do see an opportunity to do something on immigration reform, so those conversations are happening, and there is some optimism.”