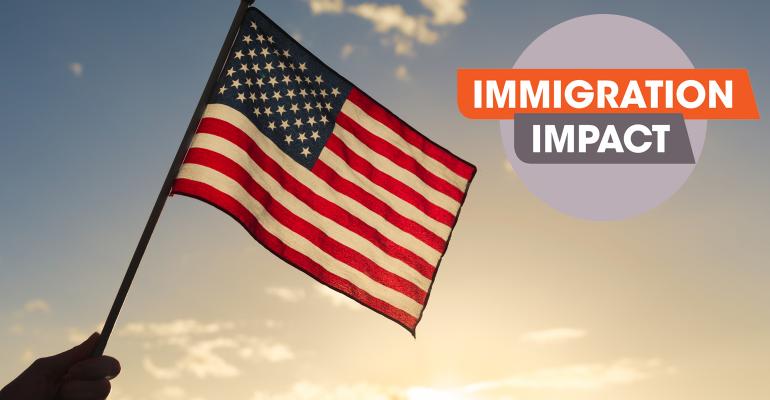 For many immigrants, restaurants are the American dream

Industry attracts many who work hard, and rise into ownership

Many immigrants find the American dream in the same place you purchase your lunch.

The restaurant industry has long been a haven for foreign-born workers, who often find work scrubbing floors and flipping burgers inside one of the country’s more than 1 million restaurants. And restaurants, in turn, get a reliable source of labor for one of the nearly 15 million jobs they need filled.

Yet this haven extends into ownership. Many of these workers go on to start their own restaurants, or they work their way into buying franchises. Overall, immigrants own 29 percent of all restaurants and hotels, more than twice the 14-percent rate for all businesses, according to U.S. census data.

“I love our industry,” said Atour Eyvazian, operator of more than 100 Jack in the Box locations in Texas. “We’re the only industry that opens the doors and opens the arms and accepts people like me when we come to this country.”

The rate of foreign-born ownership speaks both to the industry and the immigrants. Restaurants provide millions of opportunities for people to work hard and succeed — a path that immigrants frequently find once they arrive to the United States.

‘I thought I was going to die’

Atour Eyvazian was a teenager, alone, on the border of Iran and Turkey. It was 1984, and his family had paid people to smuggle him from Teheran to escape their war-torn country.

Eyvazian endured a series of car and bus rides, only to be robbed of all the money he had by the two guys paid to take him into Turkey and left to fend for himself. So he crossed the border on foot, and was promptly arrested by the Turkish military.

“I really thought I was going to die,” Eyvazian said. “I know I’m going into the country illegally. I know they’re going to put me in jail. My life ended, in a way, in my heart. It was scary.”

Eyvazian endured 40 days in a Turkish prison before reuniting with his family in Istanbul, where they made their way to the U.S. embassy. After several months, they were allowed to move to the U.S., where Eyvazian’s uncle lived.

“I was giving up hope,” Eyvazian said. “Some weeks later, they contacted me and said my paperwork was ready. It was by far one of the greatest moments of my life.”

Two weeks after they arrived in Los Angeles, Eyvazian’s uncle took him to a nearby Jack in the Box, kick-starting his career in the restaurant business.

“Nobody would give me a job,” said Eyvazian. “I couldn’t speak English. I didn’t know the culture. They made me feel comfortable. They trained me. They taught me. This industry is so unique.”

Eyvazian worked his way up through the company, ultimately landing in the San Diego office. Eventually, he and a partner opted to own their own restaurants, and they now have 106 locations in the Houston and San Antonio areas. They also have eight El Pollo Loco restaurants. To Charley Shin, CEO of Charleys Philly Steaks owner Gosh Enterprises, immigrants bring the same mentality to opening a business that they needed to venture into a foreign land.

“Anyone who starts a business has to have a lot of courage,” Shin said. “When someone is leaving their own country and going to a foreign land, they are inherently more courageous people. They are much more entrepreneurial.”

And restaurants are, at their heart, a relatively simple business. People eat three times a day, providing a constant source of demand. A restaurant that provides good food and good service has a chance of success, even if the industry is among the most competitive in the country.

“The barrier to entry is very low,” Shin said. “They see that, if they just work hard, and if they just give good food, the chance of being successful is high.”

Guillermo Perales, a native of Mexico who became a Golden Corral franchisee in the 1990s and is now one of the nation’s largest franchisees, said that franchising is one reason so many immigrants make their way into restaurant ownership. Franchising provides a well-established brand, so entrepreneurs don’t have to start one from the ground up. And it provides a playbook for them to follow. Perhaps most important, a franchise system provides backing, which makes it easier for entrepreneurs to get financing.

Lenders, after all, are more willing to loan money to an entrepreneur who has the backing of a $1 billion franchise system than one starting a restaurant from the ground up. That helps people like immigrants get the money they need to start their business.

“It’s the safest way to invest and make money,” Perales said. “It’s easier to get financing. It’s easier to operate. You’re with a brand that has recognition.”

Because restaurants have such a need for labor, they tend to reward hard work. “It’s not like they have bountiful opportunities elsewhere,” Shin said. “They don’t mind working hard to become successful.”

Eyvazian doesn’t believe that immigrants work harder simply because they are immigrants. He said people with little tend to work harder to get something, and many people who come to the U.S. start with nothing.

“It’s not immigrant versus non-immigrant,” he said. “Any human being, when you’re in need, you’re willing to work hard as humanly possible to get it. If they need you here a couple of hours extra, you say ‘Let me clear up my schedule.’”

‘She gave me everything she had’

Charley Shin’s family came to the U.S. from their native Korea in the late 1970s. His mother spent some time working in factory jobs in Ohio before starting a small Japanese restaurant near the campus of Ohio State University. Shin spent a lot of time working in that restaurant while he was in high school.

“We were a poor, immigrant family,” Shin said. “It was not much to speak of, just a small, local Japanese restaurant. We just worked hard to make a living.”

When Shin was two years from finishing college at Ohio State University, he urged her to sell the shop and take it easy for a while.

“I told her, ‘Mom, I’ll be graduating in two years. I’ll support you. Take life a little easy.” One year later, however, with money getting tight, Shin recommended starting up a restaurant chain that specializes in Philly cheesesteak sandwiches.

“She gave me everything she has,” Shin said. “I’m really forever grateful to my mother. In my life, I’m grateful to God — I have strong, Christian faith — and after that is my mother.” On the job training

In exchange for this hard work, restaurants provide a lot of on-the-job training, and that training extends past flipping burgers or counting change.

For Eyvazian, that local Jack in the Box provided a crash course in the English language and the American culture.

“I learned everything I needed to learn about the culture,” he said. “About the people, what’s good, and what’s bad.”

For instance, Eyvazian said, he never understood why the restaurant would be busy on Saturdays. In Iran, those were off days. Working in the restaurant made him understand that in the U.S. that it was the beginning of the weekend, and people were out doing things.