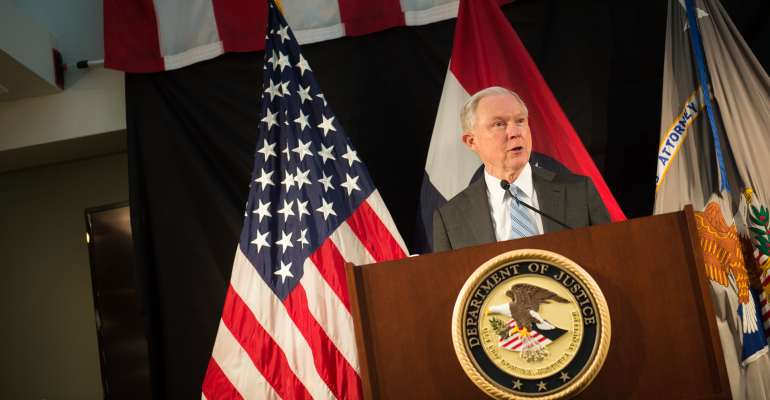 Jeff Sessions declares a “new era” of enforcement for those who enter the U.S. illegally

During a speech to Customs and Border Protection personnel, Sessions issued a tough warning to those considering crossing illegally into the United States.

"For those that continue to seek improper and illegal entry into this country, be forewarned: This is a new era,” Session said in remarks. “This is the Trump era."

The attorney general continued: "The lawlessness, the abdication of the duty to enforce our immigration laws, and the catch and release practices of old are over."

Sessions’ meeting coincided with the release of a Justice Department memo that directed federal prosecutors to prioritize such immigration-related offenses as the "bringing in and harboring" of undocumented people, identity theft and resisting arrest.

In addition, the memo called for felony charges to be brought against re-entering undocumented immigrants who already have two or more misdemeanor charges under certain circumstances, such as a felony criminal history, gang affiliation, prior removal and deportation.

Sessions said the Trump administration is committed to reducing illegal immigration, telling the patrol gathering that the Southwest border is “ground zero” in the battle.

“Here, under the Arizona sun, ranchers work the land to make an honest living, and law-abiding citizens seek to provide for their families,” Sessions said. “But it is also here, along this border, that transnational gangs like MS-13 and international cartels flood our country with drugs and leave death and violence in their wake. And it is here that criminal aliens, and the coyotes, and the document-forgers seek to overthrow our system of lawful immigration.”

Sessions said since Donald Trump became president and made the fight against illegal immigration a priority, “already we are seeing the results.”

In addition to meeting with Arizona border patrols, Sessions also said the Justice Department was hiring more immigration judges to reduce backlogs in immigration courts, and was reforming its hiring program to get judges in place faster.

“We can no longer afford to wait 18 to 24 months to get these new judges on the bench,” Sessions said. “So today, I have implemented a new, streamlined hiring plan. It requires just as much vetting as before, but reduces the timeline, reflecting the dire need to reduce the backlogs in our immigration courts.”