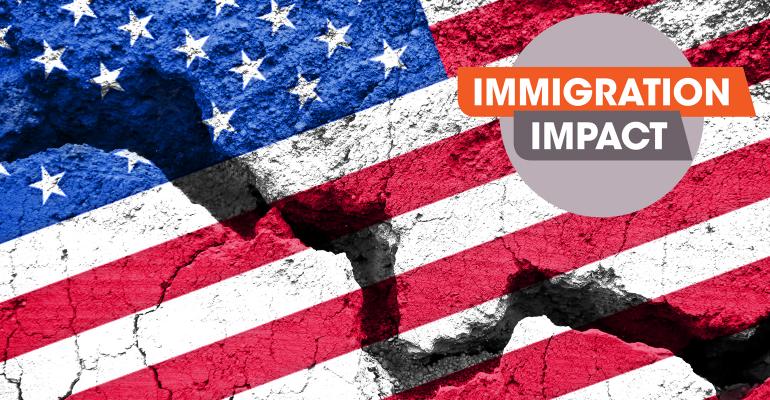 Consumers prove to be divided on the topic of immigration

Restaurants caught in clash of practicality and politics

The Sanctuary Restaurant movement is a joint project of the Restaurant Opportunities Centers United, or ROC, and Presente.org, an immigration advocacy group. The initiative’s stated goal is to offer support and resources to workers, restaurants and consumers in an embrace of diversity and civil liberties.

Don Ramon’s had joined the Sanctuary movement after the White House broadened plans to deport undocumented immigrants. Nati Ramirez, whose family has operated Don Ramon’s since 1982, said they joined to show the restaurant would have “a place at the table for everyone,” as a sign said on the wall.

But, as soon as news of the press conference aired, Don Ramon’s started getting some nasty phone calls.

“They said you should be ashamed, or we’ll never patronize you. And someone said ICE [Immigration and Customs Enforcement] is on the way and you’d better be ready for them,” she said. Other callers just made obscene comments or breathed heavily.

Ramirez said she wasn’t trying to make a political statement.

“I have my opinions, but I know some of my customers were for Trump and some were for Hillary,” she said. “You always leave politics off the table because it could jeopardize your business.”

On the other hand, Ramirez said the restaurant also got a lot of positive feedback from customers, and she often sees her guests touch the sign in a gesture of support.

“You’ll always get the positive and the negative,” she said. “But it has really been more positive.”

The reaction, however, indicated a nation divided.

The National Restaurant Association argues that the sanctuary initiative is misleading.

“Legally, there is no such thing as a ‘sanctuary restaurant.’ ROC and other labor unions are manipulating this issue in an attempt to grow their dwindling membership,” said Leslie Shedd, vice president of communications at the National Restaurant Association.

“They have no legal authority to waive federal immigration laws — and they know it. The National Restaurant Association strongly urges all restaurants to follow the laws of the land.”

For many in the restaurant industry, the immigration issue is a matter of practicality more than politics.

A crackdown on undocumented workers will heighten an already challenging labor shortage, say many in the industry. A more practical solution is comprehensive immigration reform that will include a path to citizenship.

“The immigration labor force is the backbone of the industry here in San Francisco,” she said, representing both workers and restaurant owners.

“The real opportunity is to provide education for our members and workers to know what their rights are and to know what to do if ICE shows up at their homes or workplace,” she said. “It’s not about complaints. It’s not a legal designation, so there’s nothing to complain about. It’s more about showing solidarity.”

But, like much about today’s political landscape, the issue has sparked a passionate response. Some restaurant operators that are taking a position have been battered by opposing waves of public opinion.

After President Trump in January issued an executive order to prevent refugees from several mostly Muslim countries from traveling to the U.S., for example, Starbucks Corp.’s chairman and former CEO Howard Schultz unveiled a plan to hire 10,000 refugees around the world over the next five years.

The move was celebrated by some and derided by others. Trump supporters called for a boycott, and criticized the coffeehouse chain for playing politics.

A report by buzz tracker YouGov Brand Index in March suggested Starbucks’ refugee plan may have hurt its brand perception, as measured by a Buzz Score based on consumer surveys.

But Starbucks pushed back, saying there is no evidence of any backlash, according to key metrics tracked by the company’s market research partner Kantar Millward Brown.

The issue came up again at the Seattle-based chain’s annual shareholder meeting in March. A shareholder representing conservative group The National Center for Public Policy Research asked Schultz why he was willing to risk Starbucks’ reputation and why he didn’t react similarly to travel bans imposed by Democratic presidents.

Schultz responded by insisting the plan to hire refugees was based on core values of compassion and humanity, not politics.

“There is zero, absolutely no evidence whatsoever that there’s any dilution in the integrity of the Starbucks brand, reputation or core business as a result of being compassionate,” he said.

Other anecdotes indicate a similar backlash.

The taqueria La Parrilla in Watkinsville, Ga., reportedly closed to allow workers to participate in the Day Without Immigrants protest in February. Workers returned the next day to find a sign on the door scribbled with a swastika and phrases like “You just got your last peso from me,” and “Build the wall,” according to the Palm Beach Post.

A general manager at the restaurant declined to discuss the issue. But the report indicated the sign was later covered in positive statements.

And just as Trump supporters have mobilized to vote with their feet, those on the others side of the political spectrum on the immigration issue are doing the same.

Like Don Ramon’s, hundreds of restaurants have signed on to the Sanctuary Restaurant movement.

For Dana D. Derchsweiler, owner of the three-unit chain Walnut Cafés in Boulder, CO, the spirit of the movement is a natural progression of the brand’s values.

“The Walnut Cafés have always been inclusive, fun, cool, funky, safe community cafes where people can gather, have great food and great service and be treated respectfully and with civility always,” she said. “We demand it.”

Restaurant owners like Derchsweiler see the movement as a resource, a way “to connect with other like-minded businesses.”

Hoping guests will want to support businesses that share their values, ROC partnered with digital advocacy platform Spendrise to sell gift cards or pledges for restaurants that join the Sanctuary movement, or who participated in the Day Without Immigrants, or Day Without Women protests, as well as the upcoming Day of Action protest scheduled for May 1. Through Spendrise, guests can launch campaigns, pledging to support businesses that reflect their values.

According to a poll by CNN and ORC International in mid March, 60 percent of Americans said they believe developing a plan to allow those who are undocumented but working to become legal residents should be a top government priority. That percentage has climbed since late 2015, when only 49 percent of respondents said the same.

The March survey also found 71 percent of respondents did not think the government should deport those in the country illegally, an increase from the 63 percent who felt that way in late 2015.

Conversely, in March, only 27 percent supported government deportation of illegal immigrants, down from 35 percent in late 2015.

And 90 percent said they would favor legislation that would allow longtime illegal immigrants who are working, speak English and are willing to pay back taxes to stay and apply for citizenship, an increase from 88 percent in September 2016.