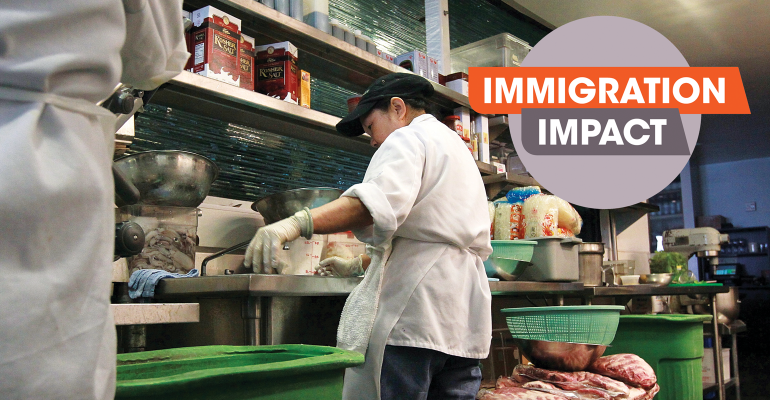 A tight labor market hits the back of the house hard

The challenge of filling back-of-the house restaurant positions and keeping workers in them has become increasingly intense in today’s tight labor market, experts and operators say.

More line cook, busser, dishwasher and prep chef positions — many taken by immigrants, both legal and undocumented — go unfilled as managers and owners wrestle with the labor market.

“Operators are finding it very difficult to keep workers in the back of the house,” said David Denney, a Dallas lawyer focused on the restaurant industry. “A worker will take the trash out the back and somebody will offer them a quarter more an hour to work next door. This is happening to people.”

The tight back-of-house market poses problems for operators, making planning for growth every bit as difficult as planning next week’s schedule, Denney said.

“There’s a big aura of uncertainty around the attrition rate of your back-of-house employees,” he said. Successfully meeting the hiring challenges for the kitchen has never been more crucial, said Michael Martensen, operating partner of the recently opened Q Tacos at Machos Cantina and co-owner of Proof + Pantry, both in Dallas.

When positions go unfilled, it puts more stress on the chef.

“The No. 1 thing chefs are is hard-working,” Martensen said.

“They are not going to let people know they have a hole in their system. I see chefs sweating it out. If they don’t find anyone to fill a position, it falls on them. They have to work that shift until they fill that void. As an owner, you don’t want to see that happen.”

Martensen’s executive chef, Nick Hurry, said the back-of-the house hiring challenges have never been harder, not only in filling positions, but also developing and cross-training skills for employees without a lot of experience.

“Once I train these guys, they spend about a year, and then their second job will offer them much more than I can to work double shifts. So they quit. It’s tough to train someone up and then have them bail,” Hurry said.

Back-of-the-house employment statistics back up the growing number of anecdotes.

“Getting enough candidates is worse at the back of the house,” said Victor Fernandez, TDn2K’s executive director of insights and knowledge.

Fernandez said preliminary results from the People Report 2017 Recruiting and Turnover Survey found that, on average, restaurants get twice as many candidates per front-of-the-house open position than for the back of the house.

And about two out of every three restaurants reported that the number of applicants they get per open position has not increased over the past year, Fernandez said.

“On average it takes 40 percent longer to fill an open back-of-the-house position than a front-of-the-house one,” he said.

Fernandez said more than 70 percent of companies in the survey said they had to provide additional incentives, such as sign-on bonuses or higher base pay to attract candidates.

“We’re so reliant on immigrant labor,” said Harsh Ghai, whose family operates well over 100 Burger King and Taco Bell restaurants in Northern California through their company Ghai Management Services. “It is so difficult to find employees.”

While Ghai called low unemployment “a good problem to have,” he said that the lack of available labor is forcing many operators to raise wages well beyond California’s high minimum wage.

Law-abiding restaurant operators will do their legal duty and due diligence in vetting immigrants, getting the correct paperwork and running Social Security numbers through programs like E-Verify, Denney said. E-Verify is the Internet-based system that compares information from an employee’s Employment Eligibility Verification form I-9 to data from the U.S. Department of Homeland Security and Social Security Administration records to confirm employment eligibility.

“Once people have been presented with documents that establish, at least on the surface, that an employee is legal, the inquiry will stop there until there’s some sort of red flag,” Denney said. Red flags include a worker who comes to the employer with new documentation, he said.

Immigration doesn’t necessarily tie in to whether the labor market is tight, Denney said.

But the Pew Research Center has found eating and drinking places lag only the construction industry in rankings of industries hiring the highest percentages of unauthorized immigrant workers.

That represented more than 8 percent of the 28.1 million foreign-born workers in the U.S
labor force, according to research by the National Restaurant Association.

As the economy inches toward full employment, employers across all industries are finding an evaporating pool of talent available to fill positions.

According to data from the Bureau of Labor Statistics, end-of-month job openings in the economy averaged 5.6 million during 2016, up from 5.3 million during 2015 and the highest level since this data collection began in 2000.