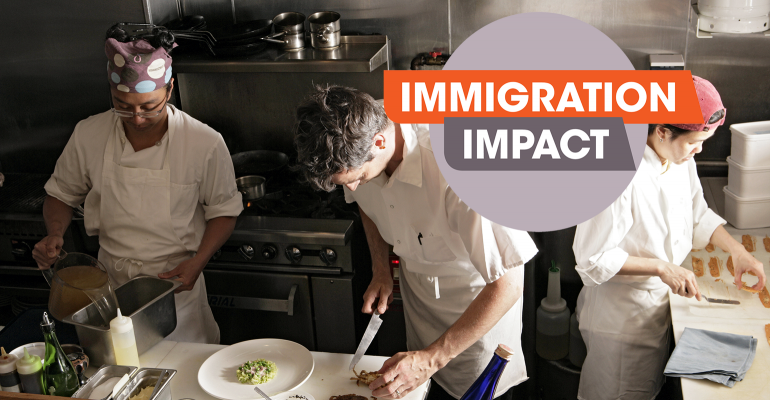 As immigration issues intensify, the restaurant labor market is squeezed

Today’s debate over immigration is being waged against a backdrop of intense employment pressure in the restaurant industry.

“This is an extraordinarily difficult time to get staffed and stay staffed, both in the hourly and the management ranks,” said Bob Rycroft, managing director at TDn2K, the Dallas-based industry analytics firm, which publishes Black Box Intelligence and People Report.

“Unemployment is at a very low point, and most everybody who wants a job has got a job,” he said. “And wages are creeping up, which ought to portend better results for the restaurant industry than it has.”

Total nonfarm payroll employment increased by 235,000 jobs in February, according to monthly unemployment figures. The unemployment rate fell one-tenth of a percent, to 4.7 percent, the U.S. Bureau of Labor Statistics reported in March. Victor Fernandez, TDn2K’s executive director of insights and knowledge, said the People Report Workforce Index found that recruiting qualified candidates at both the hourly and management levels continues to be a substantial hurdle for operators, with little relief on the horizon.

“Both hourly and management turnover continue to rise, and are at 10-year highs across the industry’s segments,” Fernandez said. “Median hiring rates are above 100 percent for all restaurant industry segments. This means that for every employment position in their restaurants, most companies on average have hired one or more people to fill it at some point during the last 12 months.”

The National Restaurant Association reported in February that 14.4 million people are employed in foodservice. The industry adds about 170,000 workers a year.

“The good old days are gone, in terms of abundant labor,” said Wally Doolin, TDn2K founder and chairman, at the Best Practices conference in January.

The restaurant industry has the youngest workforce of any sector in the economy, according to the NRA, “and the steady decline in labor force participation among 16-to-24-year-olds presented additional challenges in recent years.”

“The shrinking availability of individuals in that age cohort will have serious implications for the restaurant industry, as 16-to-24-year-olds currently represent about four in 10 restaurant workers,” the NRA said in February.