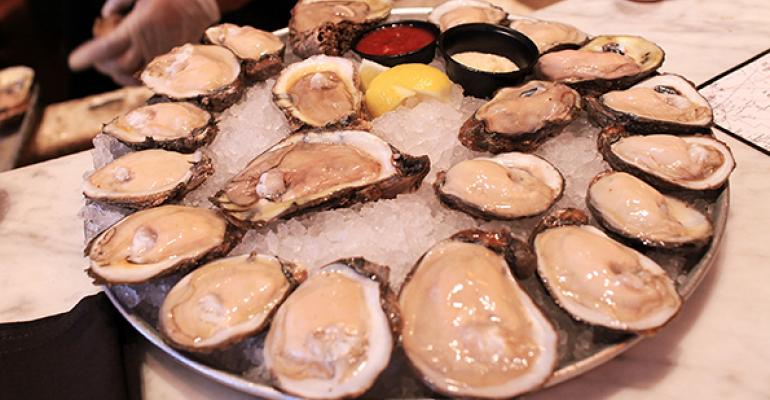 <p>A report found that the sales of some non-seafood items rise even higher than seafood sales do during Lent.</p>
Seafood Trends

Some non-seafood items sell even better

Restaurants that focus on seafood during Lent might be missing an opportunity, according to data from GrubHub.

The online food ordering service found that although seafood orders rise on Fridays by about 4 percent nationally during the 40-day period before Easter, other items sell even better.

Many restaurants offer seafood specials during Lent — Feb. 18 to April 4 this year — to appeal to the roughly 24 percent of the U.S. population that is Roman Catholic. Avoiding meat on Friday during Lent is a custom followed by about 60 percent of American Catholics, according to a 2008 poll by the Center for Applied Research in the Apostolate at Georgetown University in Washington, D.C.

But more than half of Americans are Protestant, according to the American Religious Identification Survey, also conducted in 2008, and for many of them Lent is a period of reflection, repentance and, most importantly for restaurateurs, abstinence, whether that involves fish on Friday or not. Takeout orders reflect that, GrubHub found.

GrubHub compared orders before and during Lent last year and found that sales of more indulgent items fell during that time — March 5 to April 17, 2014. Additionally, on Sundays, which according to some customs are not part of Lent, orders of more indulgent foods rose.

Comparing the 44 days before Lent in 2014 to the 40-day Lenten period that followed: 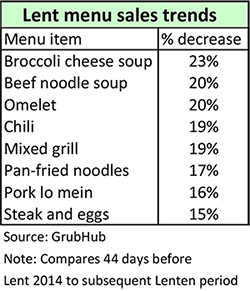 Indulgent items spiked on Lenten Sundays compared to the Sundays before Lent, possibly indicating pent up demand from the rest of the week: 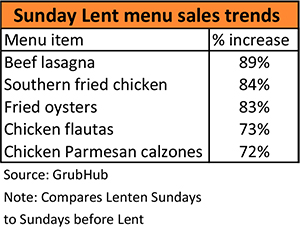 Seafood orders did spike more significantly in heavily Catholic communities, particularly in the Northeast, where seafood on Fridays rose by as much as 16 percent.

Correction: March 12, 2015 A previous version of this story misstated what food many Catholics avoid on Friday during Lent. They avoid meat.