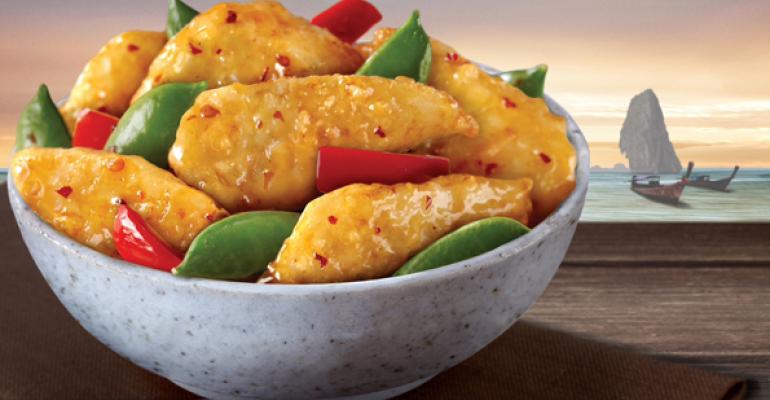 Lent, the 40-day period before Easter that begins on March 5 this year, is a period of reflection and repentance for some, and also a time of increased seafood sales for the restaurant industry.

“It’s a significant business opportunity, I think, for all chains,” said Brad Haley, chief marketing officer of CKE Restaurants Holdings Inc., the parent company of quick-service restaurants Carl’s Jr. and Hardee’s, which rolled out fish specials for the season.

About 24 percent of the U.S. population is Roman Catholic, according to the Pew Forum on Religion & Public Life, and about 60 percent of Roman Catholic people follow rules about avoiding meat on Fridays during Lent, according to a 2008 poll by the Center for Applied Research in the Apostolate at Georgetown University in Washington, D.C. That means more than 14 percent of Americans avoid meat during the seven Fridays of Lent.

“Seafood just dominates the food industry right now as Lent approaches, not only in QSR but in consumer packaged goods as well,” he said, noting how ads from fish-stick companies and others dominate media at this time of year. “It’s hard to say how much is Catholics avoiding meat and how much is people watching TV and saying, ‘Hey, that looks pretty good,’” Lynch said.

Online restaurant ordering company GrubHub reported at the end of Lent last year that seafood orders in its system rose between 5 percent and 10 percent during the period, depending on the location, with particular spikes in heavily Catholic cities such as New York, Boston and Chicago. Meatless orders on Fridays during Lent were 20 percent higher than just two years earlier, the company pointed out.

Panda Express said that last year it saw a “significant” increase in seafood sales on Fridays during Lent, although it wouldn’t give a specific figure.

Dave Wallinga, Panda’s vice president of marketing, said Lenten promotions fit well into the chain’s LTO schedule, which starts each year with Chinese New Year in late January or February. The next logical LTO period is near Lent, so the chain makes sure it’s a seafood item. Usually that’s shrimp, but this year it’s fish.

Wallinga said Lenten offerings allow the chain to maintain a variety of different proteins on its buffet, but it’s also a nod to the chain’s mostly Catholic Latino guests — “a very important segment of our consumer profile,” he noted. “It just seems to make sense to offer an entrée that serves them during this time of year.”

Haley of CKE said the seasonal seafood preference is noticeable. “There’s a lot of advertising against fish that happens at this time of year, and I think whether you’re Catholic or not, it’s a seasonal thing to do,” he said.

“It’s sort of equivalent to offering an eggnog shake around the Christmas holidays, because the day after Christmas it doesn’t sound that great,” Haley said.

That means carefully measuring inventory to make sure the chain doesn’t run out of supply too soon, but also making sure it doesn’t have too much of a surplus. However, some of these items might have longer staying power, especially as consumer demand for variety in general and seafood in particular, with its reputation for being healthful, is on the rise.

Carl’s Jr. tested a charbroiled cod sandwich for Lent last year that proved to be so popular that it was added as a permanent item.

“Last year we saw that the charbroiled Atlantic cod sandwich seemed to be very incremental,” Haley said, adding that the fact that the fish was grilled rather than fried probably helped. “We absolutely were gaining share for having a distinctive product instead of a me-too fish product,” he said.

The item will be offered at Hardee’s as a special this season, and Carl’s Jr. and dual-branded Hardee’s/Red Burrito restaurants also are offering a fish taco during the season.

Popeyes, with its Louisiana marketing positioning, already has a strong seafood product base with various shrimp offerings, and it has chosen Lent this year to introduce new menu boards systemwide, as well as two new permanent seafood items. One is a Cajun Fish, which is a whitefish seasoned and rolled in a crumb breading, and the other is a quarter-pound of Popcorn Shrimp. Some markets in the South are offering catfish instead of whitefish, Lynch said.

Popeyes has also launched a Seafood Mardi Gras promotion featuring eight butterfly shrimp with cocktail sauce for $4.99. In April the chain is offering a Cajun Surf & Turf of four shrimp and two chicken tenders for $4.99.

Although the practice of foregoing meat on Fridays during Lent goes back many centuries — some scholars say it predates some books of the Bible — a growing number of chains have been offering seafood items during Lent in recent years.

Wienerschnitzel introduced its first Lenten special around six years ago, according to vice president of marketing Tom Amberger, when it introduced the Sea Dog, an Alaska pollock fillet served with tartar sauce and shredded lettuce on a six-inch hot dog bun for $1.99.

Since then it has added Fish ’n Chips — two fish fillets and three ounces of fries for $3.59  — and a Fish Wrap — a fillet with mayonnaise, salsa and shredded lettuce in a nine-inch tortilla for $1.99.

Amberger didn’t give sales figures, but he said the addition of the items was an accommodation to customers’ demands, “and in that regard we’re happy with the sales that we get.”

“I think it’s prevented some of our customers from perhaps visiting QSRs that offer a fish product during the Lent season, and we do get some customers who will have fish during the week as a change of pace.”

Correction: March 5, 2014  This story has been updated with the correct legal name of CKE Restaurants Holdings Inc.