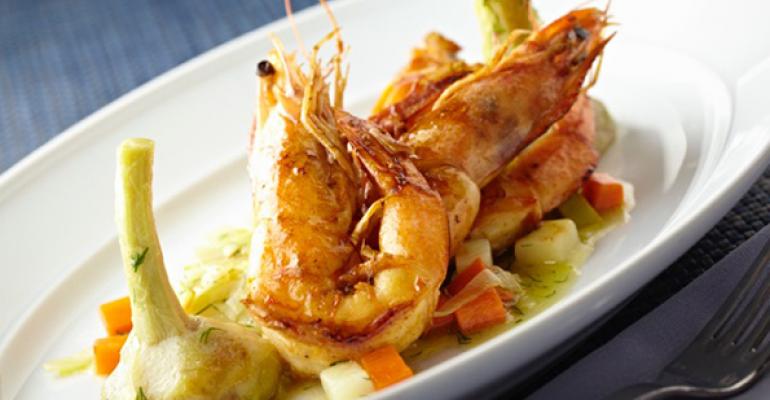 For the millions of people who abstain from eating meat during Lent each year, the 40-day Christian holiday that begins on Ash Wednesday and ends on Easter, eating out can be a challenge. This year, a number of chefs and restaurant chains plan to make it easier on customers by reviving popular seafood dishes and creating fresh options.

“Lent brings even greater attention to what Molyvos specializes in — fresh, healthy, authentic Greek cuisine,” said owner Nick Livanos. “Variety is important on any menu. Molyvos has always offered a menu that includes options for every palate. We think it’s important to serve a rotating selection of Lenten fare.”

Among the items slated to be on Molyvos’ Lent menu this year are dishes such as Seafood Phyllo Pies, made with shrimp, chopped mussels, octopus and squid, fish, onions, herbs and lemon zest; and Prawns and Artichokes a La Polita, a modern take on the classic Greek dish, made with stewed or braised artichokes, leeks, baby carrots, fennel and grilled or pan-seared prawns and served with a white wine and lemon sauce.

Similarly, at Red Star Tavern in Portland, Ore., chef Kyle Rourke has been offering  seafood dishes during Lent not only to provide options to those who observe, but also to entice them to come back. In preparation for this year’s celebration, Rourke just added back to the menu last year’s Marinated Gulf Shrimp, with citrus cucumber and charred sweet potato, and Fisherman’s Stew, with mussels, rockfish, potatoes, cabbage and chorizo in a green chile broth.

“Having such dishes available and on people’s radar during Lent appeals to a slice of the population looking for a good alternative to meat,” Rourke said. “If someone visits us for the first time during Lent, I hope they come back when they can enjoy a great steak or our signature Red Star Burger.”

The 100-unit Old Chicago Pizza & Taproom has been offering seafood Lent options since 2006, and it will once again offer its popular fish and chips platter, as well as an all-you-can-eat fish fry, a fish sandwich and a seafood chowder at select locations.

“It’s about being relevant, giving our customers what they want,” said Gretchen Sherlock, senior brand manager for Old Chicago.

Offering a Lent menu has not only been a way to give customers what they want; it has also increased sales for Old Chicago. Friday fish sales at restaurants that carry Lent specials have grown 15 percent to 20 percent during the 40-day period at locations that offer those items, Sherlock said.

McAlister's Deli, which began highlighting its meatless offerings on a special Lent menu several years ago, will bring back its successful limited-time Cajun Shrimp as a Po’ Boy, Caesar Wrap or Caesar Salad. Togo’s will bring back its frequently requested Lemon Pepper Tuna sandwich.

Checkers and Rally’s, which began offering value-priced Lent offerings eight years ago, will offer a two-part Lent menu this year. For the first half of Lent, the chain will offer a Pick 2 for $2 crispy fish sandwich or spicy chicken sandwich. For the second half, it will switch to a $2 chicken slider and a famous fries box, in either classic or buffalo flavors, on a brioche bun. Also available will be the Deep Sea Double sandwich and the Double Spicy Chicken sandwich, both priced at two for $5.

“Offering Lent-friendly items during this time is critical for us,” said Ryan Joy, senior director of research and development at Checkers and Rally’s. “Many of our markets respond very well to the Lent items, not just for Friday, but for the entire Lent time period, and we need to have something for this guest.”