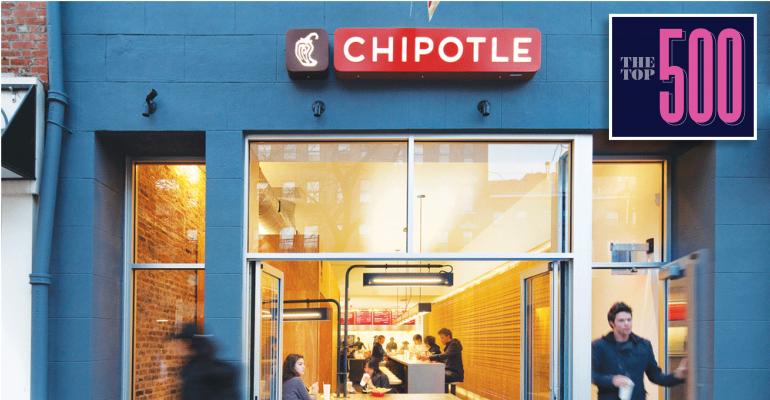 Chipotle entered the Top 10 sales ranking for the first time with $6.48 billion in sales, jumping from the No. 12 slot last year, and edging Panera out of the elite circle.
Data & Research>Top 500 Restaurants

Tectonic shifts in the Top 10 restaurants ranking by sales

There is almost always a little drama in the elite circle of top 10 restaurant chains ranked by sales, and 2021 was no different.

What was meant to be the pandemic recovery year told a story about which restaurant chain was best positioned not only to navigate the dine-in shutdown of 2020, but also to leverage strengths in 2021 as the nation continued to battle COVID and its cruel variants.

All but one among the Top 10 restaurant chains grew their sales last year — half of them by double-digit percentages — perhaps reflecting beneficial comparisons with the rough ride that was 2020. Still, only Subway saw a decline in U.S. sales (down 3% to $8.89 billion), according to the Top 500 report.

Yet all within the Top 10 grew their average unit volumes — even Subway — despite the fact that unit counts declined or increased only minimally for most of the leading chains.

During 2021, most restaurants were struggling to reopen existing units and find staffing to support pre-pandemic operating hours, so it’s no surprise unit growth slowed, said Mark Brandau, Datassential’s associate director of content. It was a year of supply chain challenges and labor shortages, even before inflation was thrown into the mix.

“Among the bigger chains, some could have grown a bit faster if they were able to staff up their restaurants,” he said.

Still, restaurants found ways to grow their sales in a number of ways, without necessarily adding brick-and-mortar units. They increased the volume of drive-thrus, added virtual brands, maximized off-premises opportunities and innovated with menus.

Datassential notes that it’s difficult to quantify how menu price increases impacted sales in 2021. Struggling to protect margins in light of their own higher labor and supply costs, restaurant operators did raise prices to varying degrees last year more aggressively than pre-pandemic, a trend that has continued into 2022.

But as traffic returned across the industry, it does not appear that higher menu prices stopped consumers from dining out again as their fears of COVID dissipated throughout the course of 2021, Brandau said.

Here are some highlights from the Top 10 restaurant chain rankings:

Though vastly different, both chains were able to take advantage of their already strong drive-thru and off-premises business, investments in consumer-facing technology and strong loyalty programs.

McDonald’s expanded its MyMcDonald’s Rewards program nationally mid-year and within six months had more than 30 million members in the U.S., which helped drive digital sales. The chain’s top six markets saw more than a quarter of sales, or $18 billion, come from digital channels in 2021.

Starbucks likewise grew its Rewards membership during fiscal 2021 by 30% to nearly 25 million, and 51% of income from U.S. stores was generated by that loyal base.

Chick-fil-A by a nose

The pandemic was kind to Chick-fil-A, which continued its steady climb up the rankings. The Atlanta-based chicken chain squeezed past Taco Bell to claim the No. 3 rank in sales, though Chick-fil-A’s numbers were a negligible $800,000 higher, pulling the chicken chain ahead in the ranking.

“And Chick-fil-A does that on six days a week,” because restaurants are closed on Sundays, added Brandau. “Chick-fil-A has been a really impressive, high-average-unit-volume brand for so long. They are one of the best in efficiency of drive-thru and line busting. That became necessary for everybody, but they were able to really lean into it.”

Now about 75% of Chick-fil-A units have drive-thrus. In fact, Chick-fil-A’s drive-thrus are so popular, some cities are reportedly fielding complaints that they are a public nuisance.

The chicken chain shouldn’t get too comfortable at No. 3, however, as Taco Bell flexes its social media marketing muscle this year with innovative campaigns around the return of Mexican Pizza, a taco subscription program and trendy promotions, like this year’s drag brunch tour.

The Milford, Conn.-based sandwich chain slipped two notches in the sales ranking from the No. 6 slot, though Subway remains the largest chain by unit count with 21,178 locations. That count, however, declined 4.5% during 2021, as franchisees went under or called it quits, a trend that was likely accelerated by the pandemic.

Perhaps as a result of underperforming units stepping out, Subway grew its average unit volumes 1.6% year-over-year to $420,000 in 2021. Those AUVs, however, are half of competitors in the category — Jimmy John’s AUVs were $866,000 last year, an increase of more than 27%.

Subway has invested in its menu, last year launching the largest update in its more than 50-year history, improving everything from bread to deli meats, a process that continued into 2022. The move, which was accompanied by a high-profile ad campaign, has galvanized the franchisee base, officials said.

Brandau noted that Dunkin’ closed a number of units after the 2020 acquisition by Atlanta-based Inspire Brands. The coffee segment also had a “shock to the system” during the pandemic, when workers largely stayed home, eliminating the morning commute as a key coffee occasion. But, in time, consumers found other reasons to go out for coffee.

“I think that segment really benefited from coffee occasions changing, in that it wasn’t the place to go on the way to or from work, but a way to get out of the house,” he said.

Chipotle entered the Top 10 sales ranking for the first time with $6.48 billion in sales, jumping from the No. 12 slot last year, and edging Panera out of the elite circle.

Chipotle’s sales in the U.S. grew nearly 20% in 2021, resulting in AUVs of $2.2 million. The Newport Beach, Calif.-based chain went into the pandemic already profiting off its strength with drive-thrus, digital ordering and its loyalty program, and accelerated those investments as off-premises shifted from a lifeline to a growth strategy.

The chain grew its drive-thru-focused Chipotlane locations, which now are in about 400 restaurants, and tested an all-digital unit with no dine-in ordering called the Chipotle Digital Kitchen. Chipotle earlier this year upped its growth plans, gunning for at least 7,000 units across North America, rather than the previous goal of 6,000.