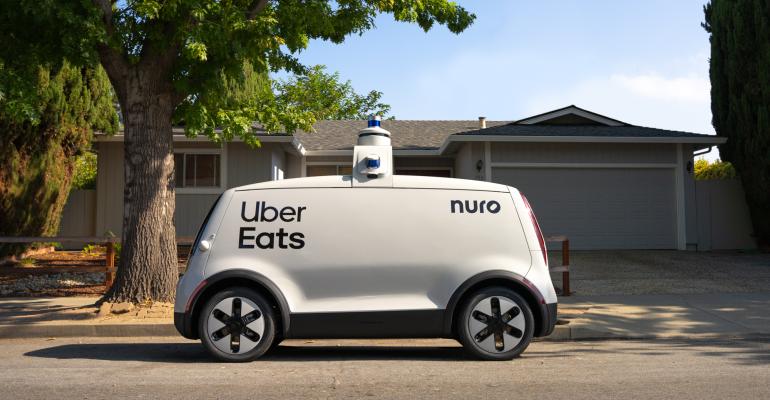 This will be an expansion of Uber’s foray into robotics.
Operations>Technology

Uber and Nuro will be partnering to complete automated food deliveries in select Calif. and Texas markets

Uber announced Thursday that the transportation and delivery company will be expanding its robot delivery capabilities with a new partnership with Nuro: a technology company that creates autonomous electric vehicles.

This will be an expansion of Uber’s foray into robotics, following test pilots in partnership with Serve Robotics’ sidewalk robots and Motional’s autonomous vehicles for longer-distance deliveries, both of which were announced in Los Angeles earlier this year and are “seeing great progress,” according to Uber.

The partnership with Nuro will launch this fall with deliveries in target markets including Houston and Mountain View, Calif. These markets were selected because they are “priority markets for Uber Eats and cities where Nuro has tested autonomous deliveries for a significant period of time,” Noah Zych, global head of autonomous mobility and delivery at Uber told Nation’s Restaurant News. Uber and Nuro plan to expand this service to the greater Bay Area following the test.

“While it won't happen overnight, we expect autonomous vehicles to be an increasingly important part of the transportation and delivery ecosystem and therefore Uber's business over time,” Zych said. “We are excited about the future of autonomous technology on Uber’s platform and see AVs providing the affordability, convenience, and efficiency that Uber consumers and merchants have come to expect.”

Related: How robots are advancing the pizza industry to the next level

Nuro is currently partnering with Domino’s Pizza, which launched its test of autonomous deliveries using Nuro’s R2 robot back in April 2021.

“Rather than building AVs ourselves, we've decided to bring AV operators’ fleets onto our network,” Zych added. “As the largest mobility platform in the world, we are uniquely positioned to do this. There is simply no other network that can provide one stop access to a global marketplace across mobility, delivery, and freight.”