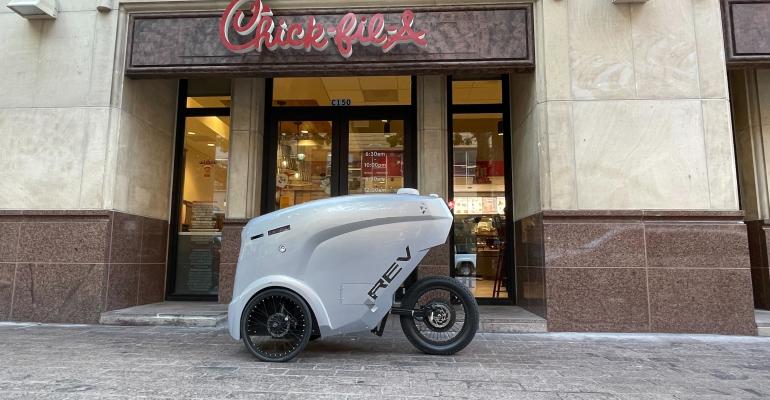 In Texas, restaurant chain tests use of Refraction AI model

Chick-fil-A is testing another version of delivery using autonomous bots.

The Atlanta-based chain on Tuesday said it is testing in a limited number of units in California, Texas and Florida a fleet of delivery robots. In Austin, Texas, the test is in partnership with Refraction AI.

Related: The birthplace of Chick-fil-A’s chicken sandwich reopens after renovation

In one unit in Austin, Chick-fil-A operator Luke Steigmeyer said the robots have helped raise awareness of delivery from the restaurant, allowing him to reach more people in the area. Refraction AI has also worked with another restaurant in the same neighborhood: Southside Flying Pizza.

“Two-thirds of my business is delivery, and I have built a team that is hungry for the next wave of digital advancements as our business continues to grow,” Steigmeyer said in a statement.

The goal is to cut delivery costs and enhance restaurant operations, said Chick-fil-A in announcing the test.

The insulated robots can travel up to 15 miles per hour, and are able to navigate through traffic, pedestrians, as well as car and bike lanes, mall parking lots and sidewalks, to designated drop-off spots, the company said.

During the test period, “safety chasers” follow the vehicles to ensure a smooth journey and answer questions, as well as learning how to improve the experience. Guests are alerted by text when the robot arrives, along with instructions for retrieving their order.

It’s not the first time Chick-fil-A has tested delivery bots. Last year, the company tested the use of Kiwibots, four-wheeled semi-autonomous rovers, in Southern California. The company said tests are ongoing in California and Florida, but officials declined to disclose the other robot partners they are working with.

Many other chains have also tested autonomous delivery in various forms, including Chili’s, Domino’s, Pizza Hut and Kitchen United.

Uber last month said it will be testing autonomous delivery in Los Angeles with two types of bots: Serve Robotics and Motional. Chipotle Mexican Grill has invested in the delivery-vehicle tech company Nuro. The virtual-brand operator C3 is working with the Coco robot delivery service.

CORRECTION: This story has been updated to clarify the Refraction AI test is limited to Austin, Texas. The company declined to disclose robot providers in test in California and Florida.