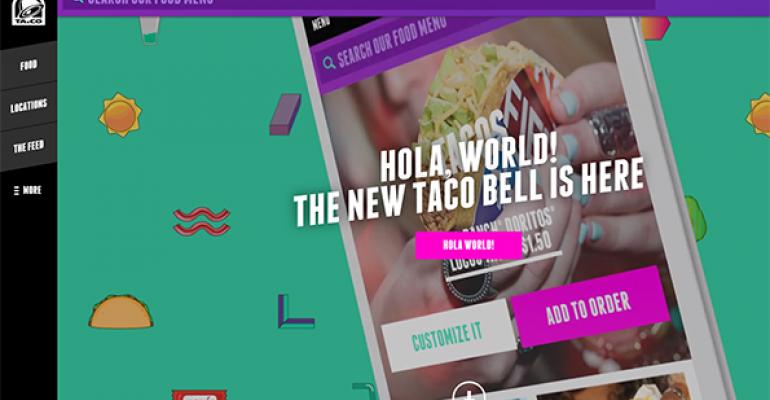 Taco Bell Corp. is upping its digital game with the launch of a new website Monday that will allow users to order and pay ahead on their personal computers and tablets, as they already do on their smartphones.

The move expands the availability of order and pay ahead capabilities and customization options across all devices, which were previously only available via the brand’s mobile app.

The new, responsive website will have a trendy URL: ta.co — pronounced ta-dot-co — which company officials said is designed to be fun and easier to access.

It isn’t that typing www.tacobell.com is such a burden, said Tressie Lieberman, Taco Bell vice president of digital innovation and on demand, but the new ta.co is like shorthand.

“It’s like using an emoji,” Lieberman said, noting that the full www.tacobell.com URL will also bring users to the same website. “We think ease is the new loyalty.”

With about 5 million users visiting the website each month, the company’s goal was to bring them the same elevated experience the app offers, which will ultimately redefine the e-commerce experience for quick service, Lieberman said.

“It’s one site with the full brand experience,” she said.

Users can place an order, customize their meal, calculate nutritional values or even look for a job on the website.

The website will also include a section called “The Feed” with curated content and behind-the-scenes news about Taco Bell and its menu, for example.

The next step is to integrate a loyalty program, which Lieberman said would debut late this year.

The rollout of online ordering is another step in Taco Bell’s attempt at digital dominance in quick service.

Last year, the Irvine, Calif.-based chain was the first national quick-service restaurant to introduce a mobile app with order and pay-ahead features, which officials at the time described as the biggest innovation since the drive thru.

To date, Taco Bell’s mobile app has been downloaded by about 3.7 million users, and the response has been “phenomenal.”

Lieberman said app users love skipping the line in restaurants, and the customization aspect has boosted average check by about 30 percent.

Feedback from mobile app users has helped Taco Bell develop the upcoming loyalty platform, which will include a gaming component as users earn rewards. Lieberman did not reveal details.

One thing missing from Taco Bell’s app and website is the ability to order delivery.

This year, Taco Bell began offering delivery at about 200 restaurants in partnership with third-party provider DoorDash, but users order via the DoorDash website.

The rollout of delivery will continue. But eventually, delivery will be incorporated into Taco Bell’s digital sites, Lieberman said.

Beyond that, the company is planning more digital moves.

On Thursday, the new, urban Taco Bell Cantina opened in San Francisco with the chain’s first walk-up window for mobile orders, a feature that will likely replace drive thrus in pedestrian-friendly sites where it makes sense.

At a restaurant in Irvine, the company is testing the use of touch-screen kiosks for ordering, which will bring some of the customization features to those ordering in person.

Guests can always customize their meals in restaurants, but the menu boards don’t have the same range of options that can be explored on a kiosk, Lieberman said. “People love to be in control,” she said.

Other tests include a “virtual kitchen” display in the front of the restaurant where guests can see their food being made in the back of the house on a monitor, which the company hopes will build on efforts to be more transparent.

Tech innovation at Taco Bell is not all consumer facing. The company is also testing the use of a digital communications board to give employees the latest news or check schedules, rather than relying on paper updates.

Spurring on Taco Bell’s digital integration is a new Digital Innovation & On Demand team that has been tasked with incorporating new technologies more fully across the brand experience.

The team, headed by Lieberman, was formed in the spring and is designed to work like a startup, coming up with new ideas and prototyping them, then quickly bringing them to scale when they find something that works, Lieberman said.

The team includes people with backgrounds in marketing, operations, human resources and technology who work together in an open space without offices, and using real-time tools to connect, like Google Docs.

“It’s a new way of working,” Lieberman said. “We really wanted to get laser focused on how to use technology to reimagine and redesign the full Taco Bell experience for our customers and our team members.

“It’s something we must do,” she added. “We have to develop new ways to stay one step ahead.”