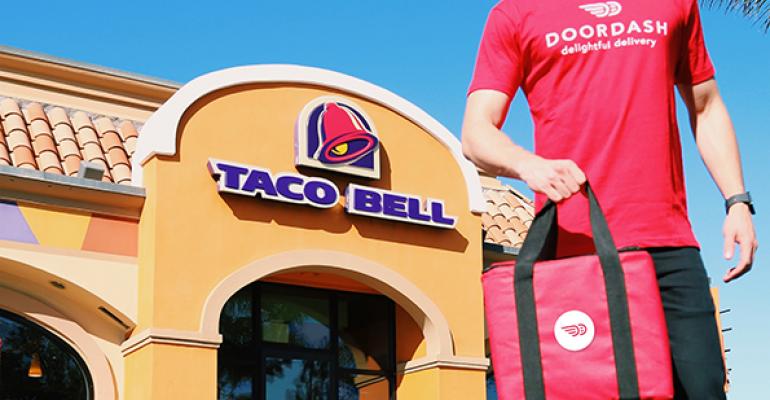 Delivery service to be available at more than 200 units

The restaurants are the first wave to offer the service, but the quick-service operator aims to offer delivery nationwide, potentially in every city where Taco Bell and DoorDash operate.

Taco Bell has about 6,000 units in the U.S., and DoorDash offers its service in 250 cities, including 15 major metropolitan areas. The delivery provider expects to double its current footprint to more than 500 cities by the end of the year.

Irvine, Calif.-based Taco Bell has been testing the partnership with DoorDash in the delivery firm’s home base of Palo Alto, Calif., as well as at a few units in Dallas; Orange County, Calif.; and San Jose, Calif.

Taco Bell executives, including Tressie Lieberman, vice president of innovation and on demand, spent a day as “dashers,” delivering food to customers, so they could understand how the high-tech world of delivery works.

Taco Bell customers who want their meal delivered will be able to order through the DoorDash website or via its smartphone app.

DoorDash charges a flat fee of $3.99 for delivery, plus optional tips, and unlike Postmates, a competing delivery service, there is no additional service charge. DoorDash does not have a minimum order requirement. Taco Bell prices, however, vary by market.

DoorDash typically negotiates a commission with the restaurant chain, and sometimes menu prices posted on DoorDash’s sites are marked up slightly, though both DoorDash head of business development Prahar Shah and Taco Bell declined to comment on the specifics of the partnership.

Customers will not be able to order food for delivery through Taco Bell’s app just yet. Lieberman said the company is exploring how to integrate delivery into the mobile app. Delivery service will likely evolve as things progress, she said.

Taco Bell will listen to users on social media, using the hashtag #tacobelldelivery, to gain insight into where delivery should be offered next.

On Wednesday, Taco Bell plans to reach out to fans via Periscope, SnapChat and Twitter, and more targeted marketing will focus on regions where customers can access delivery.

“We’re moving at the speed of a very fast-moving, on-demand economy,” Lieberman said. “Ultimately we’re just at the beginning of our journey.”

For Taco Bell, offering delivery is a natural next step after launching a mobile app last year, which allows users to order and pay ahead.

Taco Bell CEO Brian Niccol said earlier this year that delivery was the No. 1 request from customers, as a growing number of restaurant chains attempt to become more accessible, “on demand” brands.

“We were one of the first to redefine convenience at QSR with our mobile app, and knowing that delivery is the No. 1 request from our consumers, we see a tremendous opportunity to bring the Taco Bell experience to fans where and when they want it most,” Niccol said in a statement. “Taco Bell has always been about value and convenience, and we believe delivery is the next step in catering to today’s on-demand culture that’s driving consumer behavior.”

The partnership with Taco Bell is a big win for DoorDash, one of a growing number of technology-driven delivery players that are providing the app-to-door “last mile” service in the style of Uber, using a team of independent contractors as couriers.

Taco Bell is DoorDash’s first national partner, but more restaurant chains are expected to sign on with the growing tech company in the coming months.

Postmates, which uses a similar model, has captured a number of high-profile restaurant chains, including Chipotle Mexican Grill, some McDonald’s markets and Starbucks.

Two-year-old DoorDash is eager to catch up. The company has earned $60 million in funding from venture capital firm Kleiner Perkins, Sequoia Capital and other investors, including Khosla Ventures, Charles River Ventures, Pejman Mar Ventures and Ted Zagat of Zagat Survey.

DoorDash touts its sophisticated algorithms that match a driver with a restaurant to ensure speedy delivery. In tests, Taco Bell said the average delivery time was about 38 minutes.

“Our technology is what enables us to build the fastest, easiest, most affordable way for customers to receive on-demand deliveries,” DoorDash CEO Tony Xu said. “Our algorithms do the hard work that we think only technology can solve. That’s why we always say we’re a technology company starting in food versus a food company that happens to be in technology.”

Shah said the delivery provider has focused on quality over quantity.

“We here at DoorDash care about going deep with our partners. It’s not about launching vastly and making a splash, it’s about offering the best customer experience,” he said.