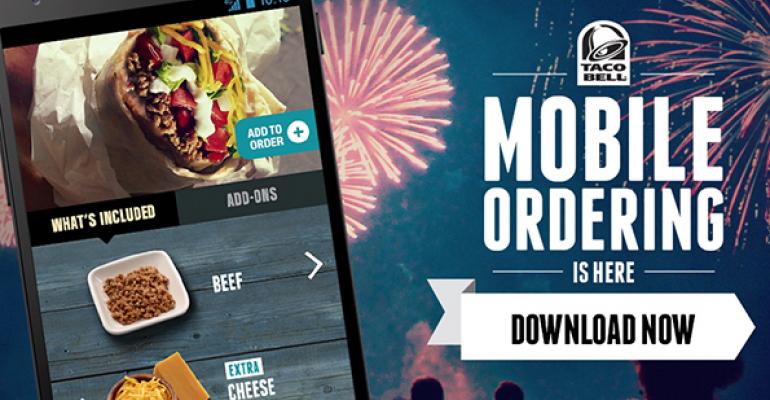 Now the Irvine, Calif.-based quick-service chain is ready to debut what Taco Bell Corp. president Brian Niccol described as “the biggest innovation since the drive thru.”

Following the successful national rollout of breakfast earlier this year, mobile ordering will be a significant catalyst for growth in the chain’s efforts to double its revenue to $14 billion and add 2,000 locations in the next eight years, Niccol said.

“We’ve had really good momentum, and I think this is one of those pieces that makes the flywheel spin a little faster,” he said. “Our new mobile ordering app is just the beginning of how we’re using technology to break down the walls of our restaurants and become more transparent with our customers about our food.”

A growing number of fast-casual and casual-dining chains offer mobile ordering, as does the quick-service Subway, and soon Starbucks, but Taco Bell is one the first among drive-thru-focused quick-service chains to offer the feature across its more than 6,000 locations.

The app launch this week, available on both iOS and Android platforms, is the first step in a series of innovations and new features to come, Niccol said.

Before the end of the year, Taco Bell plans to introduce catering — available to order via smartphone — another jab at fast-casual competitor Chipotle Mexican Grill, which rolled out catering last year.

Next year, Taco Bell plans to add a loyalty program that will be integrated with the app, and online ordering is also likely.

Millennials can access their favorite car or shoe brands via mobile device, Niccol added, and now they’re asking, “Why can’t I have access to my favorite food brand?”

Though guests can customize their meals in restaurants now, Niccol said the app will unlock the Taco Bell kitchen and available ingredients like never before, essentially allowing guests to create their own secret menus.

The app lists ingredient options and how customization at any step will impact price. When ordering on a smartphone, guests have the luxury of time to think about what they might create — not necessarily true when standing in line at a menu board.

A Cheesy Gordita Crunch, for example, could be tweaked with a Fiery or Cool Ranch shell from the Doritos Locos Tacos line. Guests can hold the sour cream or add guacamole and cheese sauce.

Every order will be automatically saved, so guests can return to the same order easily and reorder with the flick of a wrist — what Taco Bell calls a “rotate to reorder” feature.

“This is a way for people to take a product and make it their own,” Lieberman said. “They absolutely love that they can customize and personalize it.”

One of the most unique features is that Taco Bell’s app has a built-in GPS locator that recognizes when the guest arrives at the restaurant. That’s when the kitchen gets the signal to fire the order, so the food is freshly cooked and hot, whether the guest chooses to pick up in the restaurant or a the drive thru, a decision that can be made on site.

Lieberman said the nine-month test was in part to ensure the program could be scaled across the system and that team members were ready to handle the additional flow of mobile orders.

Consumers with the app will also be the first to hear about new products coming to the menu. They’ll also get access to app-only discounts.

For example, through the end of 2014, Taco Bell’s Freezes drink line will be priced at $1, but only if ordered through the app.

Rather than use a third-party provider, Taco Bell developed its mobile app in house to give it the full “Live Mas” flavor of the brand, Niccol said.

The app technology was developed in partnership with Cardfree, Tillster and Xpient.

On the day of the launch, Taco Bell’s usually highly active social media channels are scheduled to go dark, including Twitter, Facebook, Tumblr and Instagram, revealing the new way to Taco Bell is #onlyintheapp. Each social media platform, as well as TacoBell.com, will provide the link to download the app.

Consumers with the previous app will be automatically updated to the new program.