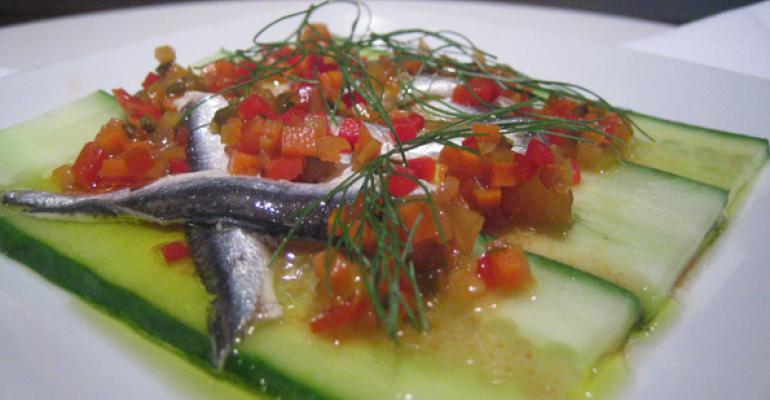 Chefs are increasingly using fish such as anchovies, sardines and smelt.

Despite their reputation as oily, smelly, fatty and usually packed in a tin, there’s lot to like about anchovies, sardines and smelt. They’re extremely flavorful, loaded with healthy omega-3s and abundant in our oceans. And while small fish are found most often on menus in Caesar salads, atop pizzas or inside sushi rolls, lately more chefs are using them in appetizers or entrees.

Their rarity on menus, along with and their distinct flavor, is precisely why chef Joe Realmuto loves to put anchovies, sardines and smelts on the menu at Nick & Toni’s East Hampton and Nick & Toni’s Café in New York City.

"Besides the fact they are delicious, they are not usually found on menus, which is a big turn-on for me,” said Realmuto. “I like to feature things that are not just run of the mill.”

Realmuto likes to prepare little fish whole and simply, allowing their natural flavor to shine. For example, he likes to roast sardines in the restaurant’s wood-burning ovens and serve them with a fennel citrus salad. Another favorite preparation is fish French fries, which are fried smelts that are lightly battered and served with a bit of aioli.

While these little fish dishes aren’t necessarily big sellers, Realmuto says they are standouts on the menu. “I like to put what I call ‘sleepers’ on the menu,” he said. “We know they aren’t going to be big sellers, but when [diners] try it they love it.”

Though he can’t predict how they’ll sell, chef Eldad Shem-Tov will certainly include an appetizer of sardines or anchovies on the menu at New York City’s soon-to-be-opened Whitman & Bloom Liquor Company.

“Usually people are not using those fishes on the menu here. People are usually afraid of what we used to get in a can,” said Shem-Tov. “When they are really fresh, the taste is delicate. I’m coming from the Mediterranean, and we do use them a lot.”

Shem-Tov will house-pickle fresh sardines or anchovies and serve them for lunch and dinner in a number of preparations, such as over rustic tomato sauce or with roasted pepper on brushcetta. He even plans to serve them as they often do in Greece, on brioche or challah with butter for brunch.

Some chefs are finding that whatever the preparation, staff buy-in is key to getting diners to order small fish.

At Sazerac in Seattle, chef Jason McClure offers a small plate of marinated white anchovies served on sliced cucumbers topped with chow-chow, a Southern condiment of pickled vegetables. It wasn’t a big seller when he first added it to the menu, but now he routinely sells 10 to 20 a day.

With the help of his enthusiastic staff, McClure also serves local smelt from Lake Washington in the summertime and small mackerel when they are available.

Similarly, chef Kevin Nashan of Sidney Street Cafe in St. Louis attributes the success of his Grilled Sardine entrée, at least in part, to his staff. When it was on the menu a month or so ago the restaurant sold about 40 orders on a weekend night of the sardine hash, which featured three filleted sardines stuffed with chorizo, caramelized onions and peppers, house-cured bacon, potatoes and plums topped with caper-honey vinaigrette.

“They’re delicious … [but] just because you have sardine on the menu doesn’t mean it’s going to sell itself,” said Nashan. “You’ve got to get the staff behind you. The staff was so excited about this.”

Though he is passionate about the distinct flavor of small fish and enjoys their quick cooking process, Nashan says they’ve not always been big sellers on the menu.

“Sometimes you win or lose,” said Nashan. “It’s all about an education process, especially in the Midwest for people who don’t get a chance to have sardines [often].”