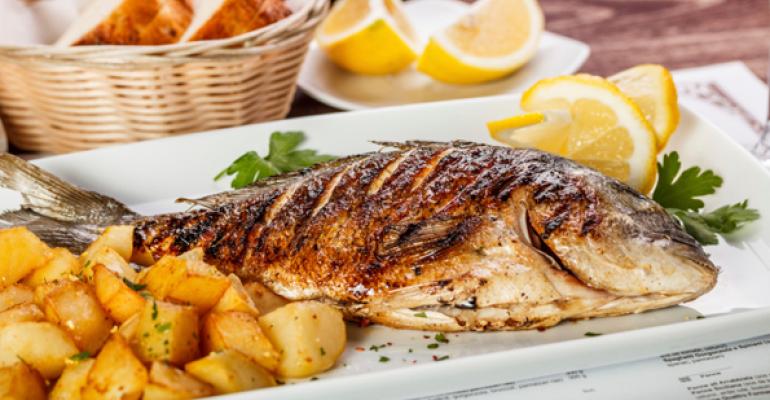 A look at autumn seafood menus

As September fast approaches, chefs are leaving behind summer’s lighter fare and returning to braising, roasting and crusting of in-season seafood paired with hearty side dishes featuring fall produce.

“It’s still nice for chefs and diners to see the food seasons,” said chef Sven Mede. “I think people are ready for their taste buds to change.”

At Catch American Seafood, one of the five eateries Mede oversees as managing chef for By the Blue Sea Restaurants in Santa Monica, Calif., about 50 percent of the menu will change each season. Among the main dishes on deck for autumn are prawns that get a winter campfire-like smokiness from being cooked on cedar paper; local shellfish with miso broth; and cornmeal-crusted Rainbow Trout.

“From a technique point of view, it’s about moving away from grilling and searing,” said Mede. “It’s more about [preparations like] crusting.”

Mede plans to pair the autumn dishes with all types of squash and pumpkins, and whatever else he finds at the local farmer’s market.

At Liberty Kitchen Oyster Bar in Houston, chef Lance Fegen celebrates the cooler weather by pairing simply prepared seafood with indulgent, seasonal sides. “With all of the fish we do, we just simply grill it,” he said. “So the fish is by itself and it has something nice and comfortable next to it.”

Among the ‘nice and comfortable’ sides are heirloom carrots roasted with honey, sherry vinaigrette and chilies; baked mashed potatoes with bacon, chives and green onion topped with sour cream and mushroom gravy; steak fries; and Singapore-style crab fried rice, one of the restaurant’s most popular sides.

Changing the menu four times a year isn’t enough for Frederik de Pue of Azur in Washington, D.C. Open just four months, Azur is already on its fifth menu. “What do you have for September?” exclaims de Pue. “I’m thinking of what to do next week!”

But de Pue is also thinking ahead. Come September, he is planning to serve up fare he simply wouldn’t want to eat in summer, such as grilled sea scallops and quinoa chips with a creamy sorrel and spinach sauce, and a hazelnut-crusted halibut, or turbo when it comes in.

Mark Heimann, chef at Marchand’s Bar & Grill in St. Petersburg, Fla., looks forward to autumn even though there are few falling leaves or cold nights in the Sunshine State. “Florida is different because it’s never really winter here, [but we have] a lot of transplants,” said Heimann. “I believe that people now strive for seasonal ingredients, the freshest ingredients.”

His fall menu will include comfort foods such as sea scallops with kabocha (Japanese) squash and smoked bacon risotto, and roasted monkfish and cockles with a tomato, fennel and pear ragout and crispy speck.

“I love to use the winter squashes, any type of cured meats,” said Heimann. “I look forward to braising of things, roasting of whole fish.”

While it may seem like the bailiwick of independent restaurants and small multi-unit concepts, at least one larger seafood chain is exploring seasonality.

Captain D’s, a more than 500-unit seafood chain best known for its hand-battered and fried seafood, will, for the first time, add seasonal produce as sides to its menu. “We are thinking seasonally across the board,” said Jason Henderson, Captain D’s vice president of product innovation. “It’s definitely something new for our brand.”

The chain will start off with grilled corn as its first seasonal side, which is slated to go into test next summer.

In the meantime, this fall Captain D’s is focused on adding seasonal comfort foods, such as the new Lobster Bites, which Henderson describes as “a rich tasting mix of real North Atlantic lobster and some other seafood,” and a new line of hearty soups, including gumbo.

“I think we’re able to keep our core guests happy and do some seasonality,” said Henderson. “Even multi-units can succeed with seasonal offerings.”