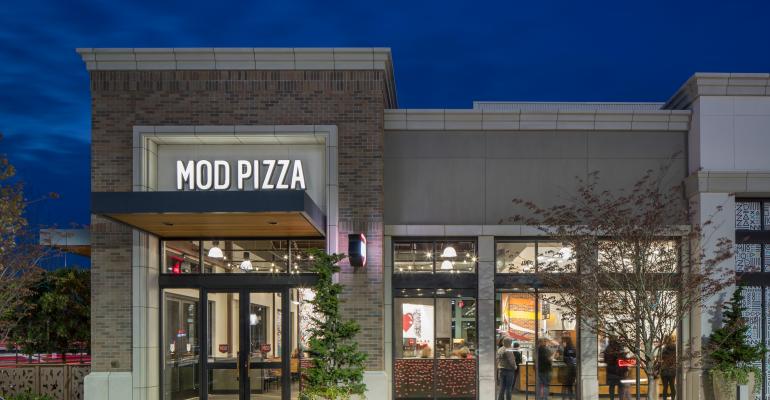 MOD is expanding to new markets in the South and Southeast with new franchisee DMBC Restaurants, LLC; 500th store to open in 2021

After a challenging year during the COVID-19 pandemic, MOD Pizza reported Thursday a 5% decline in systemwide sales to $461 million for FY 2020, and net revenues decrease of 1% to $388 million.

Despite the “pizza boom” early on in the pandemic, fast-casual pizza chains like MOD Pizza did not reap the benefits since they had to pivot from mostly on-premise dining to delivery and takeout. In 2020, MOD added curbside delivery, new third-party partners and leaned into digital marketing initiatives, resulting in a 275% increase in digital revenue, which now represents 40% of sales. The digital boost coincided with growth in their online loyalty program, MOD Rewards, which has doubled in active membership over the past year.

“As we started to come out of balance of the year we started feeling better about things and even though that line of recovery was not a perfectly linear curve from the deep decline in March — it had bumpiness to it — we had continuous progression in recovery week over week,” MOD Pizza cofounder and CEO Scott Svenson told Nation’s Restaurant News, adding that by the end of the year they had ended to a point “pretty close” to positive comps year over year.

MOD Pizza, which has been notable for its rapid growth over the past several years, significantly slowed in expansion, opening only 22 stores in 2020.

Related: MOD Pizza CEO Scott Svenson on why prioritizing company culture is a secret to success

“But given the shock to the system,” Svenson said, “you stop spending money and focus on what’s essential.”

MOD Pizza is coming up on its 500-store milestone, with unit count currently at 493. The company’s next major expansion will be in the South and Southeast, where MOD recently partnered with new franchisee Baton Rouge, La.-based DBMC Restaurants (which also owns 30 Walk-On’s Sports Bistreaux locations) to open restaurants in Louisiana, Mississippi and Tennessee, and expand the brand in Alabama in 2021. They also want to significantly build out the markets they’re in and enter new markets soon like New England and the greater New York area.

“We’re getting the growth engine going again,” Svenson said. “We’re going to selectively look for high-caliber franchise partners, and continue to pursue those discussions, along with more company-owned stores.”

Besides physical growth, one of Svenson’s long-term goals for the company is to focus even more on giving back to their community. Throughout the pandemic, they delivered thousands of meals to frontline workers through Operation Hunger and helped feed the homeless in San Jose through Project Purpose, as well as feeding and helping their own “squad members” through initiatives like the “Bridge Fund,” to help team members in need with employee-funded resources. They also pledged to help BIPOC communities by creating an employee resource group for people of color. But moving forward, MOD Pizza wants to make sure that this type of community investment continues.

“We’re thinking of how we can take our platform further in terms of social impact,” Svenson said. “We will have a leader soon tasked with helping us take our social impact to the next level.”

As for taking the company itself to the next level, Svenson addressed industry rumors that MOD Pizza would soon announce an initial public offering. Though he declined to comment on the possibility of an IPO on the horizon, Svenson said they are thinking of “how to fund their rapid growth and continue taking care of their shareholders […] whether that’s raising money publicly or privately” is unknown at this point.