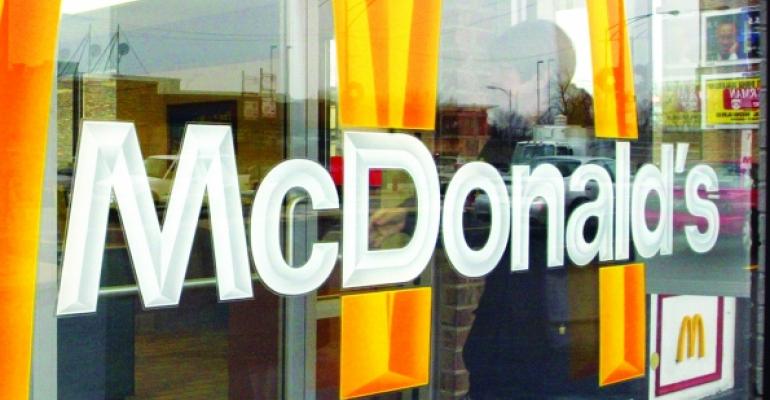 Burger chain to introduce the new value platform in January

Franchisees of McDonald’s Corp. have agreed to a new “McPick 2 for $2” value platform, paving the way for its introduction in January as part of a key element in the burger giant’s turnaround, the company told NRN on Monday.

The platform allows customers to pick any two items from a menu of four — the McDouble, the McChicken, Small Fries and Mozzarella Sticks — for $2. The price brings sandwiches back to the key $1 price point widely considered a key element in the company’s decade long run of success, albeit this time it’s in a bundled deal.

This format of the McPick platform will initially run for about five weeks, from Jan. 4 through Feb. 8, after which local markets will be able to extend the promotion. The company will back the promotion with a heavy marketing campaign.

Erik Hess, senior vice president of customer experience for the Oak Brook, Ill.-based quick-service company, said the offering is “not an LTO,” but a “kickoff of having a strong value platform.”

“The platform is going to be around choice and flexibility,” Hess said, adding that the company will “evolve” the platform based on consumer reaction. He said it was important for the chain to get a strong national value platform going at the beginning of the year.

“It’s another brick in the wall of our turnaround.”

The value platform comes as McDonald’s starts to show some green shoots in its effort to lift sales from a three-year slump. Same-store sales rose 0.9 percent in the U.S. in the third quarter. And sales are widely expected to improve in the fourth quarter thanks largely to the chain’s introduction of all-day breakfast.

In addition, McDonald’s has improved the recipe of its popular Egg McMuffin breakfast sandwiches, adding real butter, and the company has changed the searing on its beef patties and the bun toasting process. The company has committed to using cage-free eggs and ending the use of antibiotics important for human health in its chicken.

“We’re working on a lot of different things at the same time,” Hess said.

The value platform would give McDonald’s a market strategy to continue its sales momentum into next year.

Value is considered a vital element in the turnaround efforts. McDonald’s sales had strengthened in the spring of 2003, shortly after it introduced its Dollar Menu, and had been strong for the better part of a decade. Sales started weakening in 2013 and then worsened in 2014 after the company shifted to its “Dollar Menu and More” value offering.

Company executives have frequently suggested that its failure to replace the Dollar Menu with a compelling value offering contributed to its poor sales results.

“It’s one of our foundations,” Hess said. “It’s a heritage for us to be value leaders.”

This menu change also comes as competitors are using bundled offerings to generate sales. Wendy’s recently started offering a 4-for-$4 bundled meal — apparently to great success, according to some analysts and franchisees — and Burger King has lured customers with its 2-for-$5 menu.

Yet McDonald’s franchisees complained heavily about the Dollar Menu in its later years, in part because rising food costs made it difficult for them to profit off of the items. One operator in Normua Analyst Mark Kalinowski’s most recent survey, for instance, said he’s been increasing prices on Dollar Menu & More items to trade traffic for profits.

While the McPick 2-for-$2 menu brings back the $1 price point, it requires customers to purchase at least two items. “The Dollar Menu was more about singular products and less about choice and flexibility,” Hess said. “This makes it more of a meal occasion.”

Hess said that the bundle deal gives consumers flexibility to choose their own options. That, along with the price point, gives McDonald’s offering an advantage over its competitors, he said. “It’s a great value for the customer versus where we are today, and also relative to the competition,” Hess said.

McDonald’s used some “very small scale tests” in some restaurants on the McPick platform. Hess also said the company did some extensive modeling customer simulations and “pretty sophisticated analytics” to model the offering.

The company also learned from its $2.50 double cheeseburger, small fries bundle, run over the summer. The trial had some mixed results; it didn’t generate sales growth but some markets continued to run the promotion after it was over.

Hess said the company learned from that menu that, “We need a more robust set of items and have choice and flexibility.”

The choice includes two sandwiches, a traditional side in the fries and what the company considers an “fun” new product in the mozzarella sticks — which on its own generated enthusiasm recently after the company said the sticks would be introduced nationwide next year.