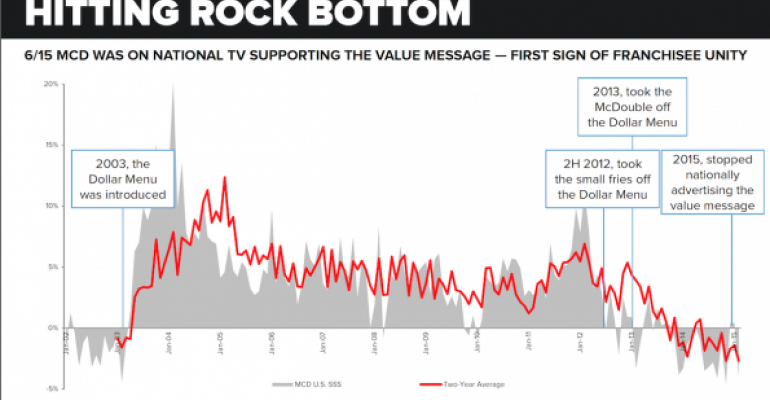 The third quarter of 2013 wasn’t a great one for McDonald’s in the U.S. Same-store sales rose only 0.7 percent, and the Mighty Wings promotion was considered a failure.

That quarter, McDonald’s went off the Dollar Menu platform it had used to great success over the past decade. It introduced the “Dollar Menu & More,” a tiered value offering with items at $1, $2 and $5. The prices for some popular $1 items were raised, including the McDouble.

The new value offer didn’t work. Same-store sales have been falling ever since.

It’s not a total correlation — sales were weakening before then. And other elements had been working against the Oak Brook, Ill.-based chain. But the shift away from the Dollar Menu, and from promotion around that menu, has clearly had at least some impact on the chain’s sales.

This is what CEO Steve Easterbrook means when he said last spring that the chain didn’t respond with a compelling value offering.

Value is clearly important to a subset of QSR consumers. As we wrote about earlier this week, QSR chains have refocused on value offerings in light of this phenomenon. Wendy’s has indicated problems with value customers. Subway, a private chain, has seen its sales struggle in the past couple of years after it went away from its $5 footlong promotion.

It’s arguably more important at McDonald’s than it is for other chains in part because the company has long been known as a value destination. Its premium items have traditionally struggled to generate consistent sales.

McDonald’s launched its Dollar Menu nationwide in late 2002, during what had been at the time the worst period in company history. Same-store sales turned positive the following April and kept gaining momentum throughout the year, hitting double digits by January 2004.

Once again, the correlation isn’t perfect. But it’s close enough to suggest the Dollar Menu helped boost McDonald’s sales more than a decade ago — and that its effective end in late 2013 helped lead to the current decline.

“You never know the real truth,” said Howard Penney, managing director with Hedgeye Risk Management. “But when you go through 12 years of marketing your Dollar Menu and you try to go away from that you’re going to lose 5 percent of your customers or whatever number that is.”

Penney graphed McDonald’s sales along with moves on the Dollar Menu, which shows the correlation between the two: 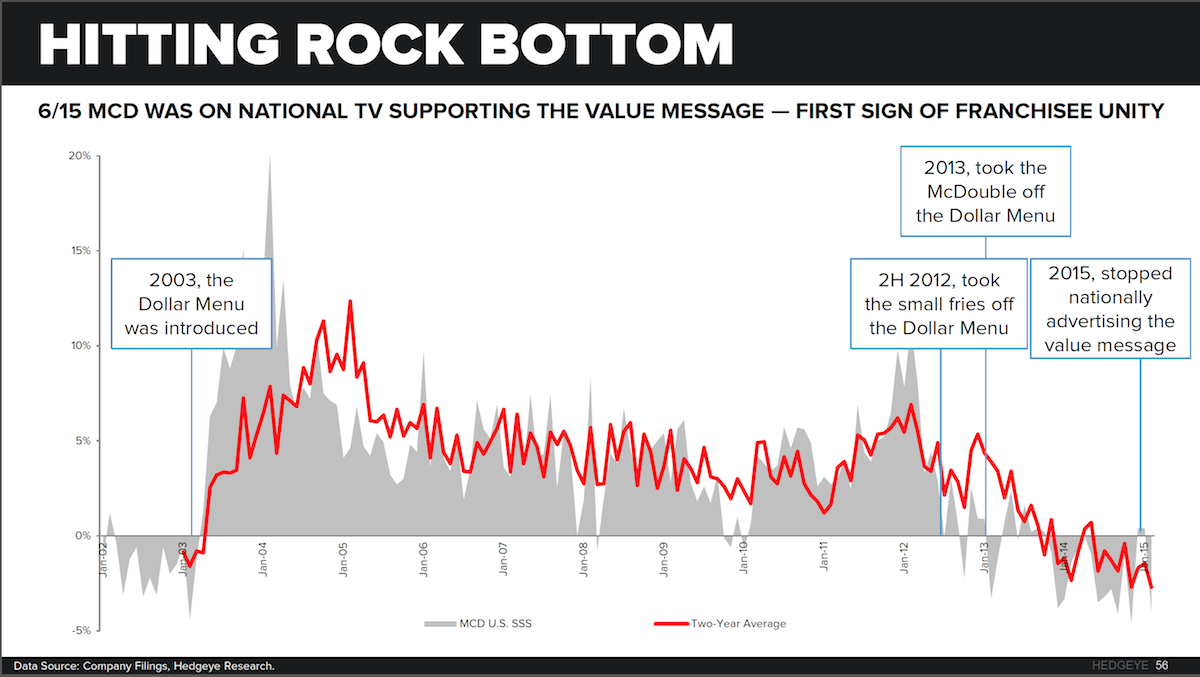 The biggest impact might have been the McDouble. When the price on that sandwich was raised, sales fell.

None of this is to suggest that McDonald’s should move back to the Dollar Menu. And many franchisees have long worried that the menu was not profitable, and believe they’re better off without it.

But the decline in McDonald’s sales since the end of the Dollar Menu explains the company’s current work on finding a compelling value platform.