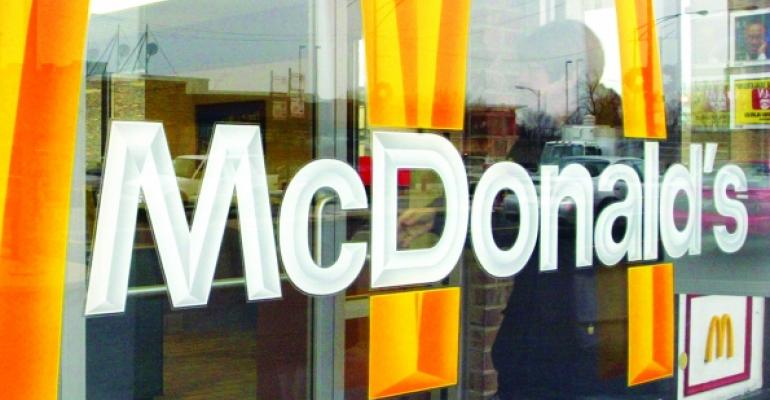 McDonald’s Corp. said Thursday that its same-store sales rose 0.9 percent in the U.S. in the third quarter ended Sept. 30, the first positive quarter for the venerable quick-service chain in two years.

Global same-store sales rose 4 percent in the period, with positive results in all segments, in what the company called an encouraging step in the chain’s turnaround effort. Executives also said sales are expected to be positive in the current quarter, too.

“I am encouraged by our operating performance with the quarter, with positive comparable sales across all segments, including the U.S., as well as sales recovery in China following the prior year supplier issue,” CEO Steve Easterbrook said in a statement. “I am confident in the fundamental strength of the McDonald’s system and our ability to drive initiatives that are focused on delivering the greatest benefit for our consumers.”

Revenues at the company decreased 5 percent to $6.6 billion from $7 billion in the same period a year ago, but that includes a 7-percent impact from the strong dollar, which has hurt profits at global restaurant chains.

The company’s “high-growth markets,” which include China, reported 8.9-percent same-store sales growth in the period. The company cited “very strong” performance in China, which has struggled because of a food safety scare last year.

Same-store sales rose 4.6 percent in the company’s International Lead Markets segment, which includes regions such as Australia, the U.K., Canada and Germany.

McDonald’s reorganized its global structure, aligning markets based on their stage of development, so high-growth markets are grouped in the same division regardless of geography, as are developed markets.

The U.S. remains its own division and is the biggest and most important market for the company.

McDonald’s has struggled domestically for the past three years with weakening sales amid intensified competition. Under Easterbrook, the company has taken numerous steps to reverse that trend.

That includes the introduction of all-day breakfast earlier this month and a proposed “Pick 2” for $2 value offer, which franchisees have yet to approve.

“Third quarter marked an important step in the company’s global turnaround,” Easterbrook said. “While still in the early stages, we believe our turnaround plan is starting to generate the change needed to reposition McDonald’s as a modern, progressive burger company.”