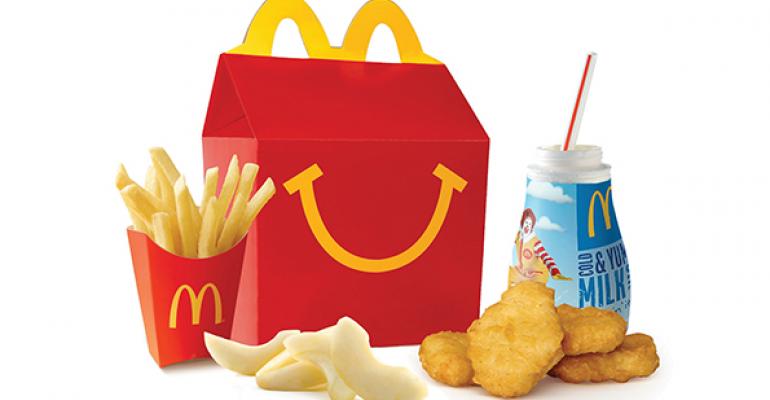 Move comes in response to consumer demand for transparency

McDonald’s Corp. said on Wednesday that it plans to stop selling chicken treated with human antibiotics at its U.S. units, adding its enormous voice to the chorus of restaurant chains saying they will offer more naturally raised ingredients.

The company also indicated that it would work to curb antibiotic use in other food supplies, including beef and pork. And it said it would stop using an artificial growth hormone in milk, which is popular in the chain’s Happy Meals.

In addition, the company said it will offer low-fat white milk and fat-free chocolate milk from cows not treated with the artificial growth hormone rBST.

“Our customers want food that they feel great about eating — all the way from the farm to the restaurant — and these moves take a step toward better delivering on those expectations,” McDonald’s’ U.S. President Mike Andres said in a statement.

The move to stop serving chicken treated with antibiotics important to human medicine at its 14,000 U.S. restaurants will happen over the next two years.

“McDonald’s believes that any animals that become ill deserve veterinary care and our suppliers will continue to treat poultry with prescribed antibiotics, and then they will no longer be included in our food supply,” Marion Gross, senior vice president of McDonald’s North America Supply Chain, said in a statement.

The company, however, did say its domestic farmers will continue to use chicken treated with ionophores, a type of antibiotic not used for humans that keeps the poultry healthy.

“If fewer chickens get sick, then fewer chickens need to be treated with antibiotics that are important to human medicine,” said Gross. “We believe this is an essential balance.”

Farmers have been using small doses of antibiotics in chicken for years, after discovering that it helps the animals gain weight. Farmers also give animals antibiotics to kill potentially harmful bacteria. But the use of these antibiotics has generated concern that it could encourage bacteria develop resistance to those antibiotics — or “superbugs.”

These bacteria can infect humans through undercooked meat, or by infecting farm workers or food processors, according to the Center for Science in the Public Interest. Patients infected with superbugs are more likely to die from infections, according to the U.S. Centers for Disease Control.

Farmers have been using small doses of antibiotics in chicken for years after discovering it helps the animals gain weight. But the use of these antibiotics has generated concern that it could help bacteria develop resistance to those antibiotics — generating the recent rise of antibiotic-resistant “superbugs.”

Several restaurant chains over the past year have indicated they plan to eliminate the use of antibiotics in chicken, including Chick-fil-A, Panera Bread, Carl’s Jr. and Hardee’s.

But McDonald’s is by far the country’s biggest restaurant chain in terms of domestic sales. Its sheer size makes it one of the largest buyers of chicken in the country, giving it enormous sway over the entire industry.

Tom Super, spokesman for the National Chicken Council, a trade association that represents chicken producers, said McDonald’s represents an estimated 4 percent of the total chicken market in the U.S.

McDonald’s decision to stop using chicken treated with antibiotics in the U.S. is significant not just for the company, but potentially for the entire poultry industry.

“This is a landmark announcement in the fight to keep life-saving antibiotics working for us and our children,” Jonathan Kaplan, director of the Natural Resource Defense Council’s Food and Agriculture program, said in a statement. “If these are verifiable, given the company’s massive purchasing power and iconic brand, we may be at a tipping point for better antibiotic stewardship in the poultry industry.”

Super said chicken producers have already been phasing out antibiotics, noting that human-critical antibiotics represent a small portion of the antibiotics used in chickens. He added that Tyson, a major chicken supplier, removed antibiotics from its hatcheries last October, and Perdue did so months before that. Both companies say they use antibiotics on chickens only as prescribed by veterinarians.

“The top priority of farmers and chicken companies is to raise healthy chickens, because healthy chickens are directly related to a safe food supply,” Ashley Peterson, vice president of scientific and regulatory affairs for the chicken council, said in a statement. She added that the council has been working with the U.S. Food and Drug Administration for years to phase out the use of antibiotics for growth promotion purposes.

McDonald’s efforts might not stop with chicken. In 2014, the company assembled a team of experts, including veterinarians, doctors, academics, pharmacologists, epidemiologists, ethicists and animal welfare experts and others, to develop recommendations for antimicrobial use. The recommendations have been published in the company’s “Global Vision for Antimicrobial Stewardship in Food Animals.”

That vision would curb the use of antibiotics in all animal products, including beef, poultry, dairy and eggs. The goals include guidelines limiting the use of certain critically important antibiotics, and would require suppliers to maintain records of antimicrobial use. Exposure to antimicrobial drugs would be limited to sick animals.

Kaplan, however, suggested that the vision doesn’t go far enough. “The statement does not include a ban on the use of all medically-important antibiotics in routine disease prevention, a practice known to contribute to antibiotic resistance,” he said.

In addition to the antibiotics in chicken, McDonald’s said it will start offering milk not treated with rBST, a hormone developed by Monsanto that boosts cows’ short-term milk output. Milk is a popular choice in the company’s Happy Meals.

“While no significant difference has been shown between milk derived from rBST-treated and non-rBST treated cows, we understand this is something that’s important to our customers,” Gross said.

The changes come as the company works to revitalize its brand in the U.S. following one of the most difficult years in the chain’s history. A big part of that effort involves the chain’s ingredients, amid growing concern about the quality and sustainability of the food supply.

It comes months after the chain started a marketing campaign called “Our Food, Your Questions” aimed at increasing the transparency of its food supply.

McDonald’s this week became a founding member of the U.S. Roundtable for Sustainable Beef, a group of restaurant chains, retailers, processors and producers to identify strategies to increase the sustainability of the domestic beef supply.

“Research tells us American consumers are increasingly interested in the social, economic and environmental impacts of the beef they purchase,” Nicole Johnson-Hoffman, vice president of Cargill Value Added Meats and interim chair of the roundtable.

Update: March 4, 2015  This story has been updated to add context and include comments from the poultry industry and health advocates.