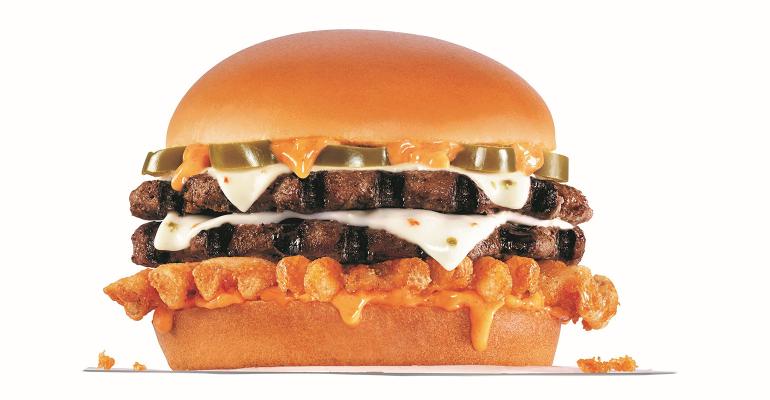 Chains, particularly those peddling indulgent fast food, have had an uneasy relationship with hemp. Certainly, many of these restaurants cater to the cannabis crowd. But for legal and principled reasons it’s a difficult topic to approach head-on.

But times are changing.

Restaurants are taking their relationship with hemp to the next level by adding CBD or cannabinoids to dishes. CBD is the non-intoxicating component of the cannabis plant purported to have calming effects. And on April 20th, the unofficial getting-high holiday, Carl’s Jr., owned by Franklin, Tenn-based CKE, plans to release a burger paired with the chain's Santa Fe Sauce infused with a hemp-based CBD oil. The burger, Rocky Mountain High: Cheese Burger Delight (CBD), will be sold for one day only at a Carl’s Jr. in Denver, where use of CBD as a food additive is legal in Colorado. In addition to the special sauce, the burger is topped with pickled jalapeños, pepper jack cheese, and fries.

“We felt that this was the right time to do it,” said Patty Trevino, SVP of brand marketing for Carl’s Jr. CBD has become incredibly popular with consumers, she said. Sales of CBD products are expected to reach $16 billion by 2025.

Carl's Jr. has been nodding to the cannabis crowd for years.

The brand is uniquely situated, both physically and psychologically, to embrace the new hemp movement, according to Trevino.

“Carl’s Jr is predominantly in the West Coast —a lot of these states have been at the forefront of accepting CBD and cannabis,” Trevino said. “We pretty much have the same personality and openness.” Trevino has no concerns about pushback from consumers.

As Trevino sees it, Carl’s is following the trends, just as they have with menu releases in the past, like their Beyond Famous Star, the company’s plant-based burger made with Beyond Meat. Carl’s scouts out trends, in part, by studying smaller brands, said Trevino, everything from retail to restaurants. CBD is showing up in all a variety of products including beauty and beverage brands.

Carl’s is joined in its CBD burger experiment by Denver-based Illegal Burger, operated by West Coast Venture Group Corp., which introduced a CBD-infused burger bowl last week. While, the use of CBD as a food additive is legal in Colorado, in other states the laws are uncertain.

In New York, for example, the city currently prohibits cannabis-infused products, but the health department has given restaurant operators a “grace period” until July 1 to transition away from these products.

“With the growing popularity of CBD and its benefits being realized, we wanted to use our window of opportunity to offer a healthier variant of CBD-infused food items,” a Fresh&Co representative told NRN. “Although we do not agree with the [New York health department] ban in CBD products in food use, we understand that this is too new on a consumer level and difficult to regulate.”

The patchwork of marijuana and hemp laws throughout the country will likely limit most national restaurant chains from adding CBD to the menus for now. So, in this way, Carl’s Jr. is at an advantage, said Trevino. “What I love about Carl’s Jr. is that we’re small enough to get away with doing some things.”