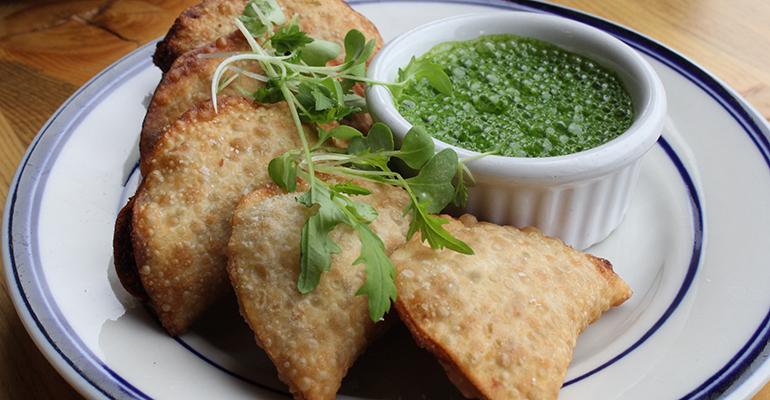 It’s high time for restaurants to pay attention to marijuana

As restaurants wrestle with regulations and how to reach the cannabis crowd, chefs experiment with infusions and edibles

Marijuana has the ability to impact nearly every aspect of the food world. From restaurant brands reaching their cannabis-friendly customers on social media to THC-laced concoctions competing with established restaurants. Certainly, there’s money in marijuana, even if it’s just benefiting from customers who come in with the munchies. But, while more than half the country approves of legalization in some form, there’s still concern from retailers about alienating the rest of the population or stumbling into a legal gray area.

“It’s a touchy subject, but it makes sense to understand a growing consumer group,” said Jeffrey Stein, a vice president at Consumer Research Around Cannabis.  “The cannabis industry is really only now getting sophisticated in terms of using consumer data.” His organization, along with the Green Market Report, a publication covering the cannabis industry, studied where cannabis users eat. Their online survey, which was completed by just over 36,000 people in 32 markets, asked what fast food restaurants legal marijuana users had eaten at in the past four weeks.

Forty-three percent of those surveyed prefer McDonald’s, according to the study, released in September of 2017. That high number probably correlates to the vast number of markets McDonald’s operates in, said Stein. The company operates about 14,000 domestic locations.

The second most preferred fast food spot was Taco Bell, accounting for only about 18% of the cannabis consumers. Wendy’s came in third place, Burger King fourth and Subway ranked fifth. Kentucky Fried Chicken, Arby’s, Chick-Fil-A, Jack-In-The-Box and Carl’s Jr followed rounding out the top ten restaurants in that order.

Mindful of the munchies

Fast food companies aren’t ignoring their customers’ cravings. Many chains, including Denny’s and Chipotle Mexican Grill, have nodded to their cannabis consumers on social media. But they shied away from a formal interview with Nation’s Restaurant News on the topic.

This approach fits with how Stein’s customers use his research. “There’s a way to utilize the data without being overt,” he said.

But other chains have taken a more direct approach.

In January, California-based Jack in the Box released the Merry Munchie Meal, a limited-time offer, which was a partnership with the cannabis-media-and-lifestyle platform Merry Jane. The meal, which included fries, onion rings, tacos, churros, chicken strips and a drink, cost $4.20 (a nod to April 20th, the unofficial cannabis holiday). The meal was available in select Long Beach, California, locations.

“Jack’s Munchie Meals have been successful for us because of the authenticity of how we speak to our customers,” said Jack in the Box chief marketing officer Iwona Alter in a news release.

“This partnership is one more way for us to connect with them — whether you’re at a concert, up late playing video games or pulling an all-nighter. We are about welcoming all of our guests, no matter what they’re craving or why they’re craving it.” And a few years prior, Carl’s Jr and Hardee’s released the Mile High Bacon, Egg & Cheese Biscuit on April 20, 2015.

The news release was titled “It’s Wake and Bake Time at Carl’s Jr. and Hardee’s.” Although, parent company CKE Restaurants Holdings seemed to suggest the title had more to do when their biscuits were baked: “Dedicated biscuit makers arrive in the early-morning hours to prepare and roll the buttermilk biscuit dough by hand, and bake the biscuits to their signature fluffy texture and golden-brown color,” the release read.

Presumably, customers were in on the joke, though.

But McDonald’s Corp was less than amused when a franchise in New Mexico, near the Colorado border where recreational marijuana is legal, posted a billboard with an image of a breakfast burrito and the text “Usually, when you roll something this good, it’s illegal!” The billboard was taken down soon after it gained wide notice. McDonald’s wrote in a statement “this local franchise’s billboard does not meet our standards.” Room for experimentation and elevation

For now, private chefs and small businesses are having the most fun with marijuana and food.

One such chef is David Hadley, a Chopped winner and Culinary Institute of America who wants to move cannabis cuisine away from its stoner roots. He hosts high-end pop-up dinners incorporating cannabis in his adopted state of Colorado.

“There's a customer base for it,” he said. “People are willing to pay for it, and people are just looking to learn more about it.”

And he predicts a near future that including restaurants with “weed tasting menus” and “weed certified” chefs.

Restaurants could face competition from new marijuana focused establishment, said Louis Maskin, a senior strategist at the San Francisco-based consulting firm The Culinary Edge. He anticipates marijuana bars that mimic the wine bar experience. “This is going to be a really, really interesting space to watch,” he said.

He expects businesses to target an audience that’s new to marijuana but ready to experiment, like the housewife who can replace her glass of wine for something that’s arguably healthier and won’t cause a hangover, he said.

“The stoner is already smoking. The person who isn’t sure [about marijuana] is where the money lies,” he said.

In San Francisco, Monica Lo, of Sous Weed, looks at cannabis as a nutrient-dense ingredient that’s getting an image makeover.

“Gone are the days of overly-potent, burnt tasting pot brownies,” she said.

The chef, creative director and photographer works with new marijuana focused brands to help bring their products to mainstream audiences. She also creates healthy recipes that incorporate marijuana, many, not surprisingly, use the sous vide cooking method.

Although marijuana has been recently legalized for recreational use in her home state of California, there’s still a great deal of confusion and uncertainty, Lo said.

“With the new regulations, many companies have to start from scratch with their business plans.” Gray area in the green rush

Early in January, Attorney General Jeff Sessions caused concern and confusion in the cannabis community when he rescinded the Obama-era directive that eased federal enforcement on marijuana laws in states with legalization. Currently the District of Columbia, Colorado, Washington, Oregon, California, Alaska and Nevada have legalized recreational use. Vermont, Massachusetts and Maine plan to legalize in July. Many other states permit medical use.

Although Sessions hasn’t scared off many current or would-be cannabis entrepreneurs, his actions have made investors and bankers skittish, according to Justin Moriconi and Ted Flowers, who run a law firm in Pennsylvania that specializes in cannabis business and regulation for clients throughout the country.

Even Moriconi and Flowers say they see plenty of gray areas in this industry. And with capital constraints, it’s often easier for a chef to dip his or her toe into the business than it would be for a restaurant.

“For a chef at home [giving classes or hosting dinners, for example] they have to abide by state laws that govern whatever jurisdiction he's in,” said Moriconi.

“If it is a restaurateur, inviting people into their place of business, they have overlays of compliance with not only state law but also the applicable federal law just as they would have to meet with any other restaurant operation.”

Even with these legal obstacles, Moriconi and Flowers argue that the restaurant and MIP — marijuana-infused product — sides of the marijuana industry will be growing for some time. “The profitability and the opportunity in our opinion is magnificent,” said Flowers. Moriconi and Flowers expect growth in marijuana lounges as well. The trend will grow out of necessity. “You can't have people walking around in large part because it's a nuisance for someone to be smoking marijuana everywhere,” said Moriconi.  “So there needs to a dedicated space for these people to go.” They see Barbary Coast, in San Francisco, as the sort of high-end lounge consumers can expect to see more of.

But don’t expect to open a restaurant that serves alcohol and marijuana any time soon, at least not legally.

“The resistance to combining alcohol with cannabis will be there for a while just because of how archaic the county's liquor laws are,” said Flowers.

For now, though, consumers are stumbling in restaurants after consuming marijuana, like at the Bartaco in Boulder, part of the Barteca Restaurant Group, which sits across the street from a dispensary. General manager Mike Gleason finds marijuana use in customers to be one of biggest hurdles for his staff and customers.

Gleason and his staff are on the lookout for so-called marijuana tourists.

“People who live in Boulder they know how to handle these things,” he said. “But people coming from out of state they’re trying something new, and all of the sudden they look they had a six-pack.”