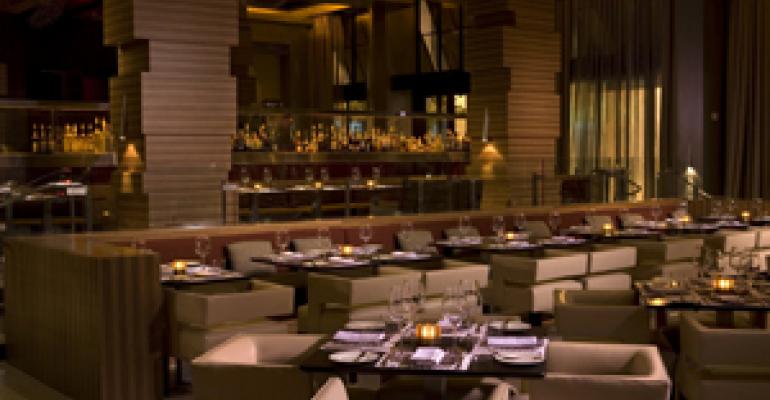 Staking out a piece of the southwest corner of the property, the restaurant's large storefront has two entrances, one located inside the hotel through the lobby, and another leading directly into the restaurant from the sidewalk. (Click here to take a look inside Damon Gordon's Quarter Kitchen.)

"We designed it with a sense of voyeurism," says Dayna Lee, principal for Powerstrip Studio, the firm that handled the design of both the restaurant and the hotel. The studio's previous projects include Hotel Zoo in Berlin, Blowfish Sushi in Los Angeles and the 36 Degrees Lounge & Pool Bar in Aspen, Colo.

The intent was to design not just a successful hotel restaurant, but a restaurant that would be successful in San Diego. Lee explains that the large glass storefront and multilevel dining area is in contrast to the smaller, more cafe-like eateries with sidewalk dining that populate the Gaslamp Quarter in downtown San Diego.

"What we brought was something a little more international. It didn't have a theme," Lee says.

The restaurant's look evolved along with the hotel. Lee says that having a restaurant in the space was part of the program from the beginning for owners Michael and Richard Kelly of Kelly Capital.

Michael Kelly says his vision for the Ivy Hotel came from his own travel experiences. He spent most of his adult life in San Diego but found himself going elsewhere for entertainment. He decided that he wanted to create a global destination in San Diego. He also chose Powerstrip specifically for their experiences in designing film sets for such directors as Jim Jarmusch and Ridley Scott.

"Their full-screen approach to motion picture production design is adapted toward design work," Kelly says. "As a team, Dayna Lee and Ted Berner envision how spaces are experienced cinematically. The design ensures that the guest experience is inviting and complete — no matter how the guest chooses to explore it — through the lighting, flow and function of the space."

Starting with what Lee described as a "bombed out" structure, several designs were rendered in different ways depicting numerous spaces and layouts.

"The reason why we went through that many versions is because we were really establishing and forming what kind of restaurant we wanted it to be," she says. "Basically, it was like we were trying on different outfits, different energy and different color palettes."

The restaurant's design is asymmetrical and layered. In addition to having different levels, the restaurant uses design elements that look stacked. Vertical wooden columns look like staggered boxes in a layered, off-kilter way that Lee said appears "as if they're about to topple; it creates a frenetic energy."

"I believe that our goal was to allow people to talk loudly, to laugh and to move from table to table," she says. "And in that way I think that it's the energy level that makes the restaurant very different for the San Diego area."

The color palette for the restaurant is an extension of the hotel lobby, but more intense. While the lobby is composed of neutral and natural colors, the restaurant gets a splash of honey from its wooden columns. Chocolate stripes are on the walls, and warm cognac is visible on the accent pillows and banquettes. Colors play off each other in the vanilla and chocolate leather, while chocolate wood floors turn into white stone as a guest enters the dining area. Some of structural bracing was left exposed for a "more period and industrial feel," Lee says.

At 8,500 square feet, the restaurant contains three dining areas and can seat 180, she continues. The mezzanine is an entire floor that can be used for private meetings, with its own audio and visual setup. The bar and the dining area are separated by just a small set of steps. The exhibition kitchen area is 300 square feet.

Lee says attention was paid to sightlines and depth.

"We try very, very hard not to have a place where someone is staring into a wall," she explains. "They can see directly in front of them to the service area, and behind that to the exhibition kitchen, through the window and out to the sidewalk."

Among the sights are the "floating" glass sculptures created by artist Anna Skibska.

"They're extremely delicate and almost look like smoke rings," Lee says. "When you hang them from the ceiling, you're really oblivious, and they're delicately sparkly under the sculpture ceiling of the main restaurant."

Another unconventional feature is an interior dining area that's intended to give a feel of the outdoors. A wooden roof with a hole in the center allows rain to fall indoors while guests dine comfortably nearby.

The feature also allows guests to drink and have a smoke "outside" without actually leaving the restaurant.

From that area, guests get a direct view of the exhibition kitchen where the pastry chefs work. The area's proximity to the kitchen ensures that food does not cool off on its way to the table.

Damon Gordon, the executive chef, previously worked with Jeffrey Chodorow's China Grill Management for seven years. He also has worked with hotels such as the Delano Hotel in South Beach, Fla., and Hotel Gansevoort in New York.

"I joined on when the plans had been put together for the restaurant," Gordon says, "but when I came on, I tweaked a few things here and there."

"I run the kitchen, so I set it up in a very European style, where both myself and my executive sous chef work … where the guys pass us the food and we plate it," he says.

With the restaurant's separate entrances, Gordon explains, it was important to welcome customers at host stands at both locations.

He describes the restaurant as a contemporary steakhouse with the motto, "simple food cooked perfectly."

"We have something on our menu for everyone. It's an amalgamation," Gordon says. "Someone wants to come in and have a beautiful steak Caprese or grilled rib-eye, and others may be more decadent and go with caviar tacos."

Asignature dish, the caviar tacos are made with a potato-based taco shell served in a custom-made stand with horseradish and crème fraîche. Customers can have their tacos made with domestic osetra or with Iranian osetra. Other dishes include a Lobster Pot Pie made with whole lobster in a creamy lobster sauce or Kobe beef that can be ordered by the ounce and cooked on a hot stone. Checks average $65.

"It's a restaurant and cuisine that appeals to a wide range of people," Gordon says. "The design of the restaurant is very modern. With a beautiful, simple and great tabletop presentation, the two go hand in hand."

"It's basically a shell, and the chef gives it the heartbeat," she says.