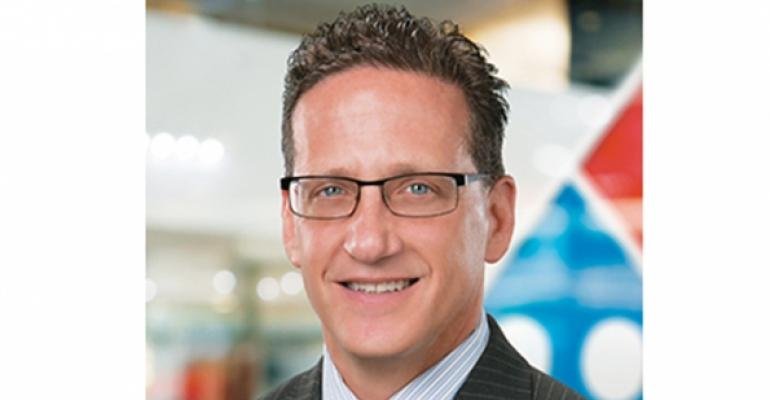 Telephone, television, timepiece, town car, Tweet or text — no matter the means, Domino’s is making sure customers can order pies no matter what screen or device is in front of them.

And Kevin Vasconi, Domino’s Pizza Inc.’s chief information officer and executive vice president, represents the growing importance of technology at Domino’s and in the restaurant industry at large.

The 12,000-unit, Ann Arbor, Mich.-based Domino’s has become a leader in putting ordering literally in the hands of the customer, pioneering such methods as text-message ordering from smartphones and smartwatch interfaces.

“There’s an estimated 8 trillion texts sent every year worldwide,” Domino’s CEO and president Patrick Doyle said in June, with the introduction of text ordering. “With so many people using their devices to communicate in this way, it made sense to allow our customers the chance to order pizza that way, too.”

Domino’s system lets customers who have a pizza profile at Dominos.com place an order by texting the phrase “Easy Order,” or simply using the pizza emoji, to DPIZZA, or 374992.

Domino’s earlier partnered with the Ford Motor Co. to launch the ordering platform for the pizza chain’s mobile app, which allows customers to place orders hands-free from their cars through Ford’s voice-activated Sync system.

Vasconi had worked at Dearborn, Mich.-based Ford from 1988 to 2000, and later worked on other ventures with automobiles and technological companies like Oracle Corp. before joining Dominos in 2012.

“If you’re on Dominos.com and not having the best experience, it’s not hard for you to go to one of our competitors,” Vasconi said. “We want to not only have the best experience in your car, but on your watch and in other venues, too.”

At Domino’s, tech investments must pay off in sales. As of October, Domino’s executives said about half of the company’s more than $2 billion in annual sales were through digital platforms. “We are promoting and continuing to introduce many digital platforms available to customers including text and tweet to order, Smart TV, Smart Watch, Ford SYNC and voice ordering via our virtual ordering assistant, Dom,” said Doyle in an Oct. 8 post-earnings analyst call. “These platforms are unmatched technology first and have been effective in keeping Domino’s top of mind and at the forefront of the digital curve — something we are very proud of.”

Doyle also said about 40 percent of the company’s digital users have created online pizza profiles since they were launched two years ago. Those allow customers to use text orders, saved orders and payment information, and the company this fall layered in a loyalty program.

Vasconi noted in the spring that Domino’s information technology staff was several hundred people, or about a third of the company’s corporate staff, and he planned to hire 50 to 60 more tech employees in 2015.

“When I first got here, recruiting was hard. A lot of real talented people we wanted to hire can work around here at the regional offices [of tech giants]. But now, when you walk in here, we feel like a tech company instead of Cubeville,” Vasconi told the Detroit Free-Press last January.