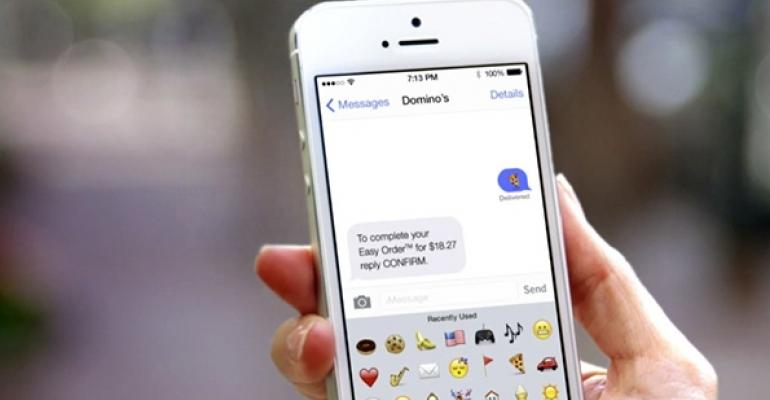 The Ann Arbor, Mich.-based operator’s string of sales growth comes as it has added numerous methods to make it easier for customers to place orders. The company is now looking to broaden its technological reach even further with a test of a loyalty program in a single market.

“We’re always looking for ways to get customers to order more often,” CEO J. Patrick Doyle said during a call Thursday discussing earnings. “That’s pretty much our core job every day when we get up in the morning.”

The company will analyze the results from the test and decide whether to expand the loyalty program systemwide. Doyle noted that loyalty programs have worked for other concepts. Chains like Papa John’s and Starbucks, he said, have successful loyalty programs.

The results are generating interest from operators to open new units, which until recently has been slow, even with Domino’s resurgence after the recession.

Domestic franchisees opened 14 new units during the second quarter. Over the past four quarters, they have added 96 locations to Domino’s system.

“There are some constraints in some stores,” Doyle said. “It is the highest quality problem we could possibly have. It is leading to our franchisees and our corporate stores putting more capital into their stores, to increase oven capacity or make-line capacity.”

He noted that a “minority” of locations are having this problem, but said that it is driving investment by the chain’s operators.

Domino’s said franchisee profitability hit a record in 2014 — franchisees’ average cash flow last year was $89,000 per location. The results are encouraging more operators to build new units, and also leading them to remodel restaurants in its “Pizza Theater” image. Domino’s expects another 1,000 locations to be remodeled under that image this year.

“If they’re strong, and franchisees are prospering, then ultimately the franchisor prospers,” Doyle said. “Because they’re doing well, our store growth continues to accelerate.”

International growth, which is flourishing, remains Domino’s primary growth vehicle. Franchisees added 708 locations over the past four quarters, including 172 locations during the second quarter. Nearly 60 percent of Domino’s units are now located outside the U.S.

Domino’s domestic same-store sales growth has come largely at the expense of smaller operators and, to an extent, the struggles at Yum! Brands Inc. concept Pizza Hut. But Doyle doesn’t expect Pizza Hut to struggle for long.

“They’re going to get back on track,” he said.

The overall pizza category is growing 2 percent to 3 percent. Larger players that have the ability to spend money on technology improvements are taking business from smaller players. Half of Domino’s orders are coming through digital channels, and the overall ease of ordering is helping drive frequency.

Getting customers to order pizza more often from Domino’s generates higher sales growth than raising prices, Doyle said. Smaller operators haven’t been able to make those investments in technology to generate that frequency.

“We’re continuing to see share shift from smaller players to larger players, and we’ve been a big beneficiary of that,” he said.

But Doyle would not indicate which form of digital ordering — Twitter, text, smart TV or smart car — is generating the most business.

“We don’t want to make it easier for our competitors to figure out how to prioritize investments to catch up with what we’re doing,” Doyle said. “But if you look at the totality of the effort, and how it’s positioning our brand in the minds of consumers, with ease of access, it’s clearly a big part of what is driving our same-store sales growth.”