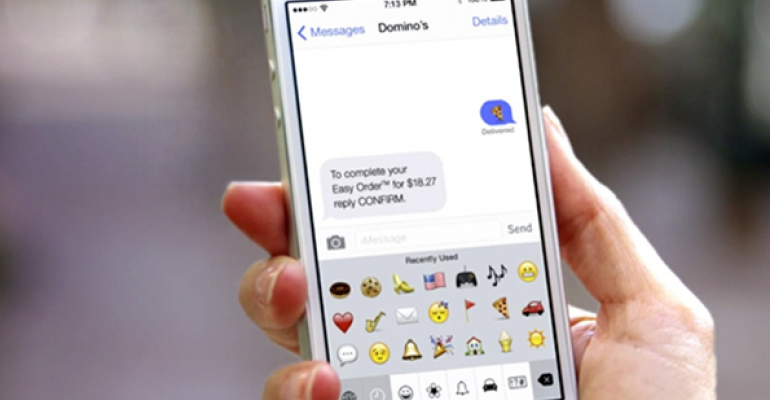 Operator adds to growing list of methods for ordering pizza

Domino’s Pizza Inc. has added ordering by text — including emoji — to its growing arsenal of digital capabilities, as the Ann Arbor, Mich.-based operator continues to find new ways to get its pizza to customers.

“There’s an estimated 8 trillion texts sent every year worldwide,” Domino’s CEO Patrick Doyle said in a statement. “With so many people using their devices to communicate in this way, it made sense to allow our customers the chance to order pizza that way, too.”

The new system lets customers who have a pizza profile at Dominos.com place an order by texting the phrase “Easy Order,” or simply the pizza emoji, to DPIZZA, or 374992.

Domino’s has been adding to its ordering capabilities in recent months. Customers can place orders via Twitter, Samsung Smart TV, Pebble or Android Wear smartwatch apps, the Ford SYNC AppLink and by voice ordering through its smartphone app.

Other large pizza chains have been using technology to build sales and steal market share from independent operators. For instance, more than half of orders at Papa John’s International Inc. arrive via digital channels.