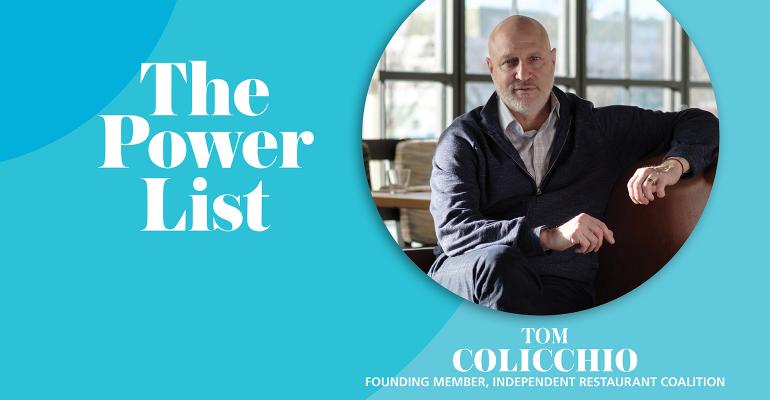 Tom Colicchio, chef and owner of Crafted Hospitality, is a familiar face on TV, known mostly as a judge and producer of the Bravo series “Top Chef.” His restaurants include the acclaimed Craft, Riverpark and Temple Court in New York City, as well as Craft Los Angeles, Heritage Steak and Craftsteak in Las Vegas and Small Batch in Garden City, N.Y.

Over the past year, however, Colicchio has become known as a voice for the independent restaurant community, which has been hardest hit by the coronavirus pandemic.

Colicchio is a founding member of the Independent Restaurant Coalition, one of many who have been doggedly lobbying for support for the Restaurants Act, legislation that would create a $120 billion revitalization fund to help support small restaurant operators with grants, rather than loans. The bill passed the House in late 2020, but was blocked from the Senate floor by Senate Majority Leader Mitch McConnell (R-Ky.) under the Trump administration.

In countless Zoom interviews, press releases and social media posts, Colicchio and other members of the coalition worked to get across the message that the pandemic has become “an extinction event” for the 500,000 independent restaurants across the country, and that the segment needs  government support to survive.

Colicchio is no stranger to political activism. He founded the advocacy group Food Policy Action, though he later resigned to focus on more direct political change. He executive produced the 2013 documentary “A Place at the Table,” about hunger in the U.S., and is host of the iHeart Radio podcast “Citizen Chef.”

He is the first to emphasize that the IRC is not about any one celebrity but a grassroots organization of chefs and operators that have banded together to amplify their plea for help. The coalition’s star-studded leadership team includes famed operators such as José Andrés of ThinkFoodGroup, Kevin Boehm of Boka Restaurant Group, Kwame Onwuachi, formerly of Kith & Kin, Amanda Cohen of Dirt Candy and many more.

With the incoming Biden Administration promising more economic relief, the coalition’s efforts will be key in winning the specific support needed by independent operators to keep their doors open and keep people employed.